Time keeps moving and things keep changing with it so we can't become complacent at all.  Life won't let us and truly, these things keep us on our toes and active and involved. 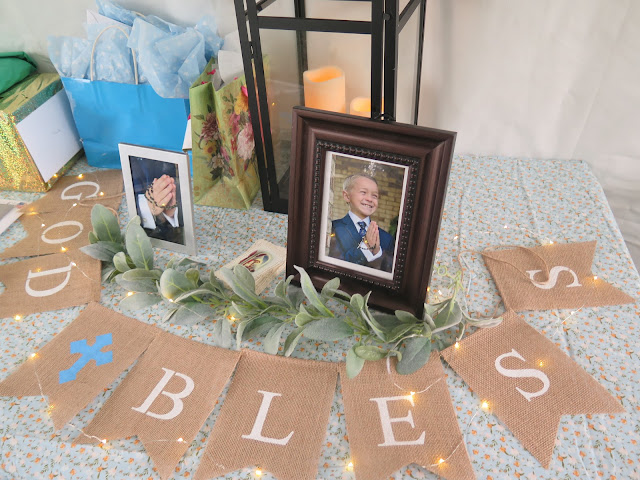 Our dear little guy, and the youngest of them, just made his First Communion last week.  It was an event we couldn't personally attend because of crowd restrictions but were able the next day to watch on a stream from the church.  Actually, watching it that way we had a perfect vantage point so all was good. 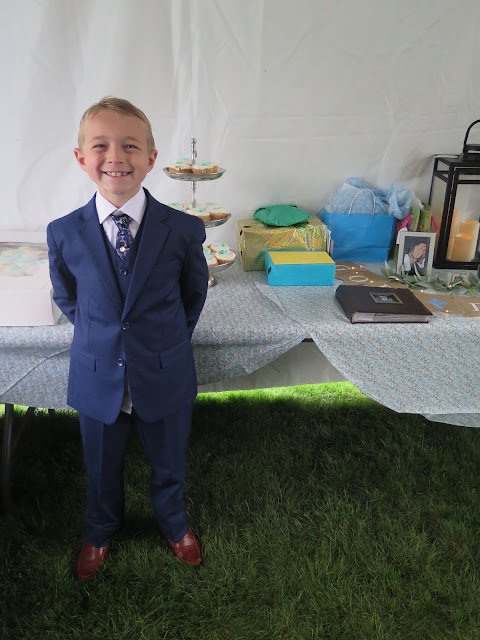 This little guy has a smile that is bigger than he is.  We all break into a big smile when he flashes his.  I tell our son that this smile is going to take this little guy places.  He knows JUST when to flash it and you can't help but fall in.  His sentimental momma made sure he was wearing a tie and tie clip from his great grandpas and carried a rosary from his dad that HE received on HIS First communion that was blessed by the Pope.  With all of those invisible hands on his shoulder he has it made. 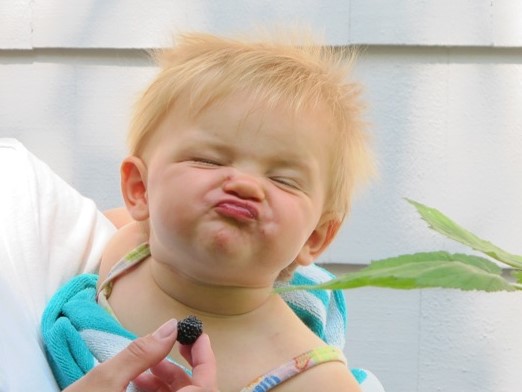 This is what we think of Covid and this little one, who is now a decade older than this photo, has Covid. We've all been so lucky so far.  Last fall our son's family had it but were all asymptomatic.  This one had/has it and after a weekend of high fever she is now dealing with the loss of smell and taste and isolation. Oh, and boredom.  Because the Health Department said it was ok, big sister moved out of their house and into ours to keep isolated from her sister. 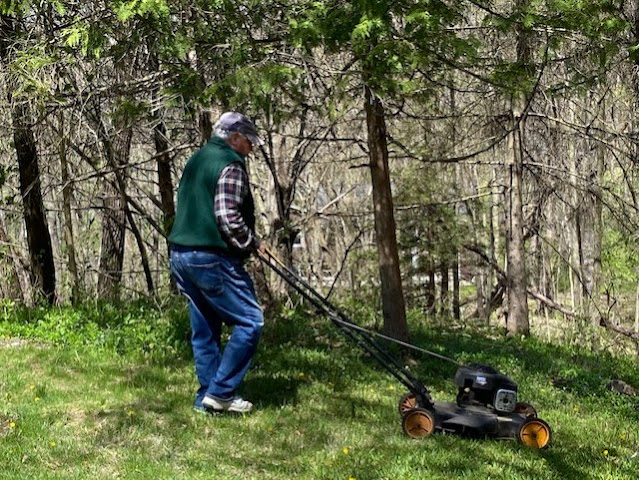 For PH, it's that time of year again. It's been cold here these past two weeks and the cool and slightly rainy weather is a grass growing dream. 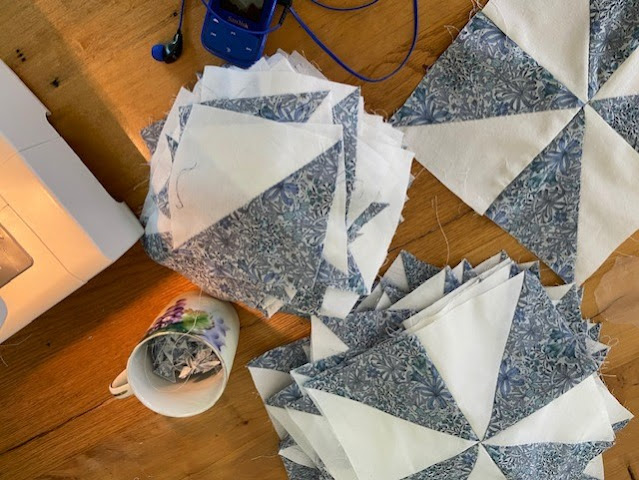 This is my latest piecing project.  I started this so long ago I truly can't date it. I can measure it in decades.  I had to think back to how long I've been quilting.  Then I realized I pieced the HSTs by hand and the stitches were tiny and even so it was really a long time ago.  Then I realized I had two  ideas tucked into the bag.  The first one was taken from a photo of a tile floor somewhere in Italy.  At the intersection of  the pinwheels there was a small, darker blue square.  I was new, new, new to quilting and thought, "that looks easy" but also new enough to not be sure exactly how to do that darker little accent square without piecing it.  I knew even back then I didn't like the machine. I thought appliqueing the accent piece in the intersection would work but I remember being afraid of applique back then.  Fold it up and put everything away. Years later I saw something else in a magazine and thought, "that looks easy"and folded it up and put it in the bag.  I pulled it all out of the closet last week and decided it's been moved enough.  But I also knew the machine was going to finish these pinwheels.  I will attach a few together and work it with easy idea #2 in sections.  I think it's going to be the prettier of the two easies.

And so the pile of UFOs grows. 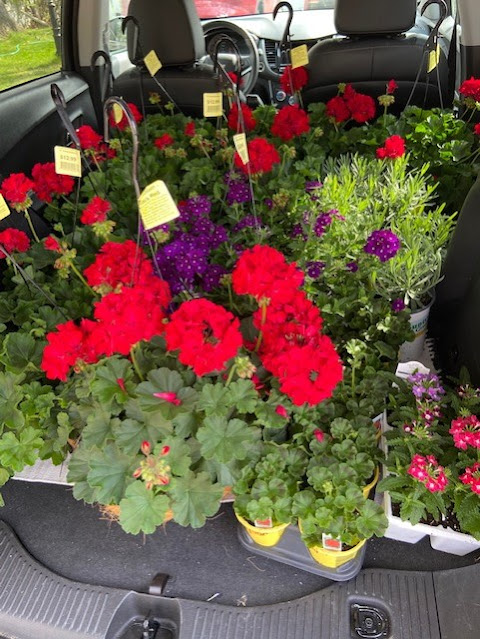 My happy day.  The day the garden center opens and very first thing in the morning I go. this place is quite far from here but they have good prices. They are far enough away to make the day feel like an outing in the countryside, which it is.   After a few days hardening off from life in a greenhouse I tip the geraniums out of the hanging baskets, nestle them into my porch pots and it's done. Instant.  I also get a hanging basket for daughter and daughter-in-law and a few little things for fun.  It's always a soul full day, that first day choosing flowers.

What a week!  We haven't had this much activity in months.  Really. Twelve Months.  All fully vaccinated, we safely saw friends on Tuesday evening and on Thursday evening, and Friday morning Friend Laurie was here and it was SO very nice to talk face to face again.  We got so accustomed to doing nothing, we forgot how nice something is. 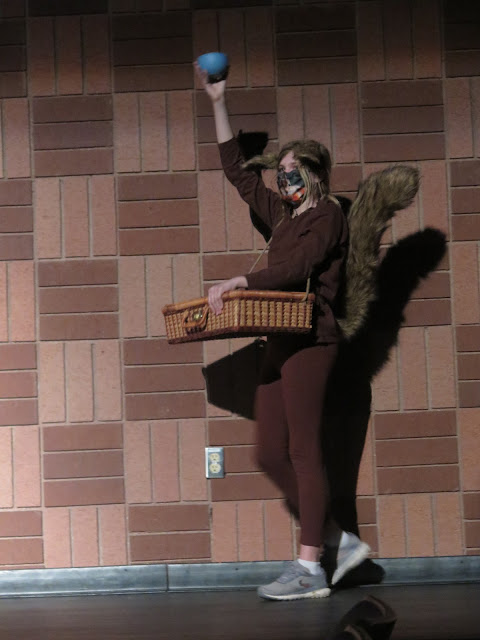 Then on Friday evening our Adelaide was in the town play (four parts, mind you) and we went opening night. She was in a squirrel costume and had the first spoken part in the play The Trial of Goldilocks. She was really good, if this grandma and grandpa say so themselves! 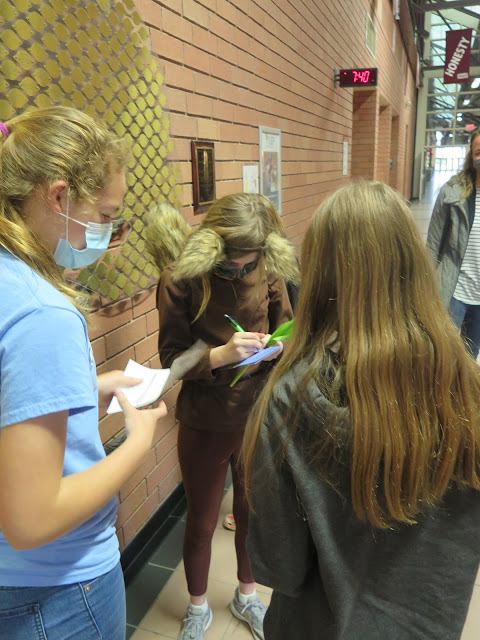 It was so sweet.  After the play her two besties since Kindergarten asked for her autograph! 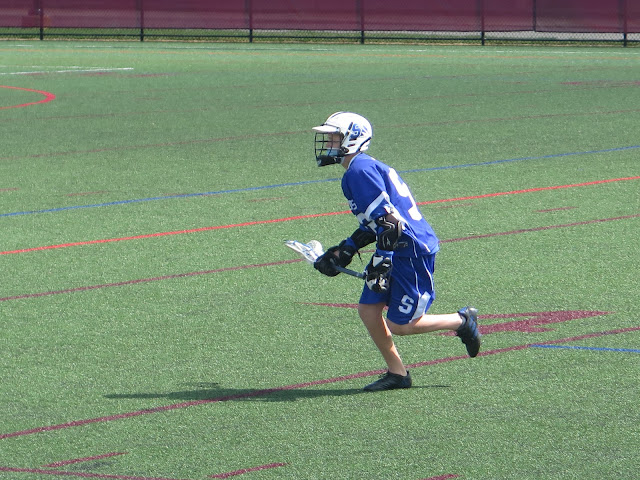 And today our Charlie was playing a lacrosse game here, from all the way across the state.  Really. A two hour drive for them but an absolute treat for us! 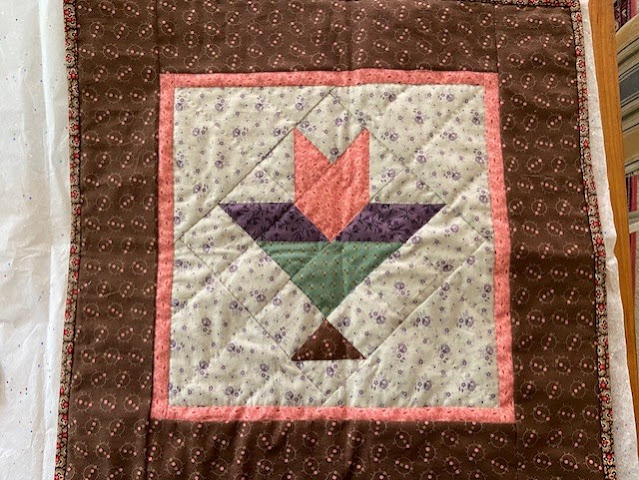 I joined a swap.  The little quilts are to be no bigger than 24 inches, no smaller than 12.  This is 18.  Civil War fabrics and pattern. This is the Carolina Lily but because I'm not very good at teeny pieces I did just one lily instead of the usual four.  I had this all packed and ready to go ( but thank goodness didn't seal the envelope yet ) when I realized I didn't take a photo for my files.  So, unwrap it, unfold it and snap!

Many years ago when I was working in a school library one of the teachers was teaching a unit on biographies. Each student would write about a person.  She told her students that they could pick anyone "but a dead white man."  And then she told me so I could direct the students to "someone else."  Because if you think of it, history is written by white men, by the victors, but in order for there to be a victor there had to be another side, another view, another hope.  I thought of that while reading The Dictionary of Lost Words.

The Oxford English Dictionary took decades to compile.  Words were collected by white men, mostly elderly, and a word could only be included if at some point in history it could be proven to have been written down. Sometimes it took years to collect, study and validate a single word.  The men worked for many, many years in a garden shed in Oxford.   Esme's father was one of these men.

Esme grew up sitting under the table in the shed listening to the men parse a word, listening to the scratch of their pens, learning just by observing,  the system of filing  and compiling.  She grew up with words.  One day a word written on one of their slips fell to the floor.  It said, "bondmaid" and she put it in her pocket and then into her trunk of treasures hidden under a bed.  When she learned what the word meant 'slave girl' she realized there were words that were not included because they were spoken, no one had written down the words spoken amongst the vendors in the market or shops or just understood by mostly women.

Esme realized the Oxford dictionary would not contain all words, as the men said it would.  It wouldn't contain the words common women used.  Women who didn't know how to write them down, and didn't need to because the words were learned by speaking them.  Esme took paper and pencil out into the world of women and started to write down everything she didn't understand for her own dictionary of lost words.  She asked for meanings when it wasn't apparent, she asked for words to be used in a sentence, and she wrote them down.

The story takes place just before the first World War and during the Suffragist movement in England.  Esme is out of her comfort zone but then again, no she isn't.  She is with her words.  This book is fascinating.  The only word I can think of.

I hope you all had a nice Easter day.  For us it was a truly beautiful, warm, sunny, blue sky day and believe me, in Michigan that doesn't happen often. We've had Easters with snow or rain or wind or winter coat cold.  But not yesterday.  Yesterday it was beautiful in more ways than weather.

We finally cooked a meal for a group and invited daughter and  her family in.  We included SIL's parents, who happen to be fully vaccinated Friend Marilyn, who I talk about all the time here and Husband.  Because the house wouldn't be full of cousins yet this year, we thought we should do something fun especially for the girls.  Turned out it was fun for everyone.

Activity One.  Egg toss.  Everyone got an apron to wear in anticipation.  We drew numbers out of a bowl and matching numbers were teams.  Well, that turned out perfectly.  Daughter and SIL were a team, PH and I were a team, though I wasn't too sure about the devious twinkle in his eye, and the girls were teamed with Friend Marilyn and Other Grandpa. I couldn't have planned that better if I tried. 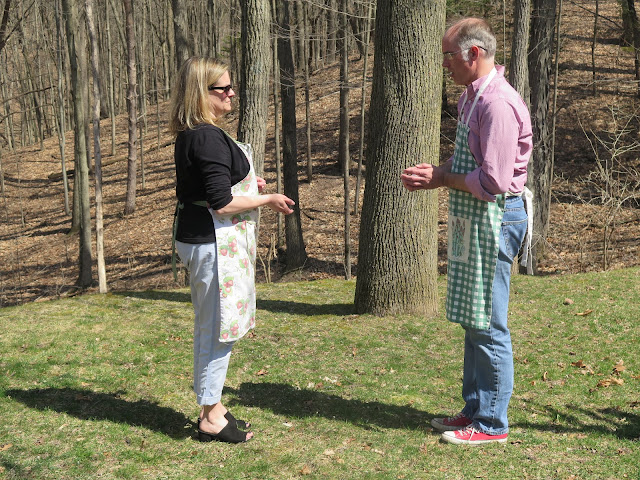 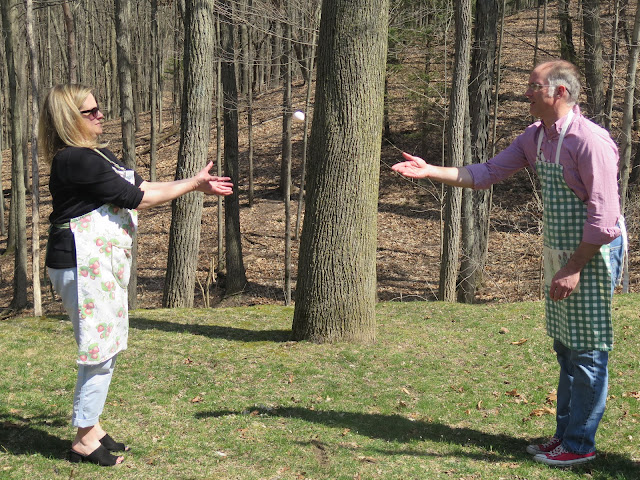 As with all egg toss competitions, the toss starts out easy. 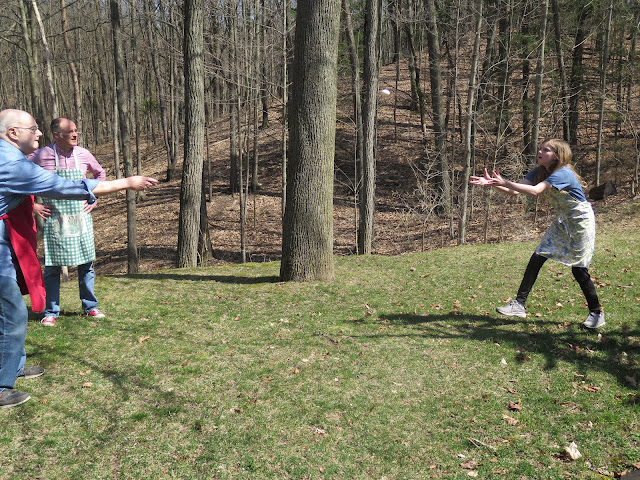 And then you have to put some thought into how to catch a raw egg. 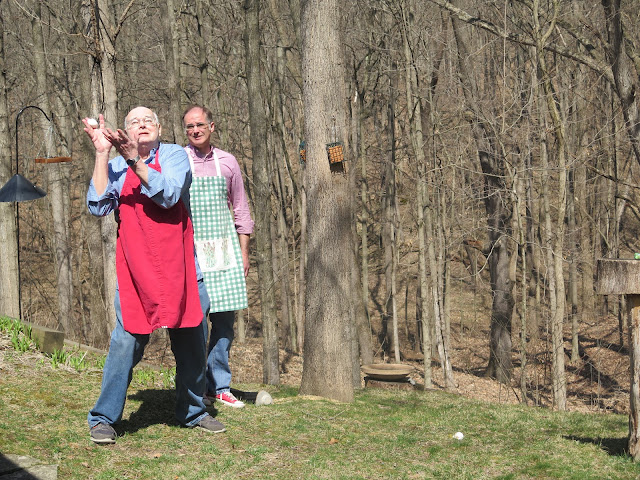 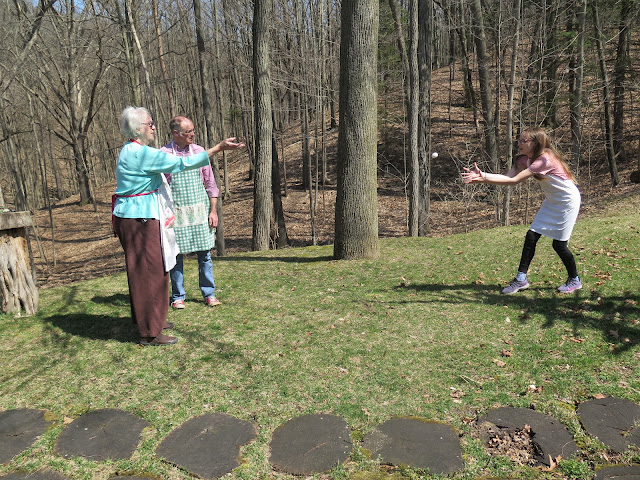 And then you have teams that are trying to be nice to each other. Just look at Friend Marilyn's gentle lob to Elizabeth.  No fair! 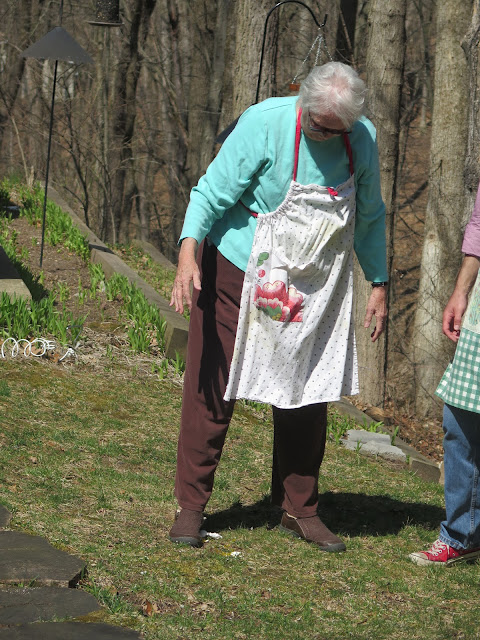 But the inevitable is still going to happen.  It IS an egg toss! 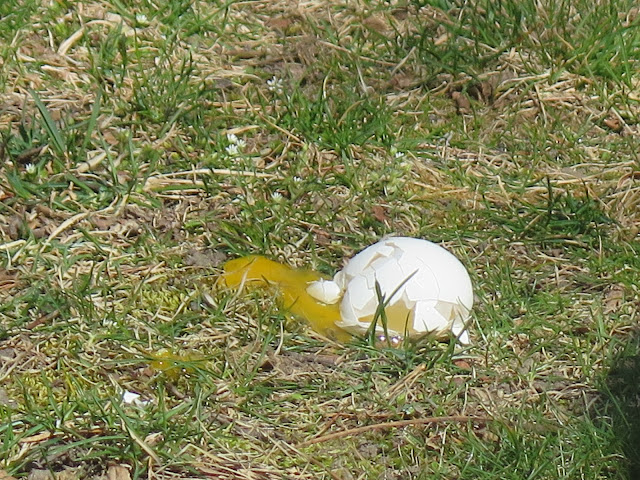 Next we moved to the driveway.  That long, twisty, steep driveway full of ruts, cracks and holes for an egg roll race.  We used plastic eggs for this one and the day before, PH and I tested how far the eggs would travel with or without a little ballast.  We tried an egg empty and with one, two or three marbles in them.  We determined the eggs with two marbles traveled best and farthest and had the most chance of getting through the ruts, cracks and holes. 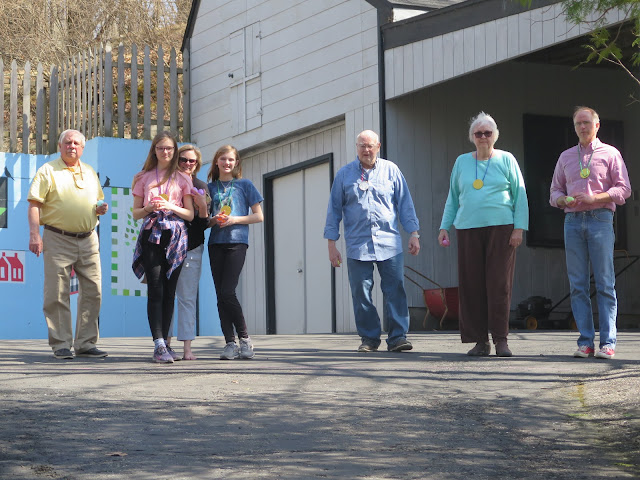 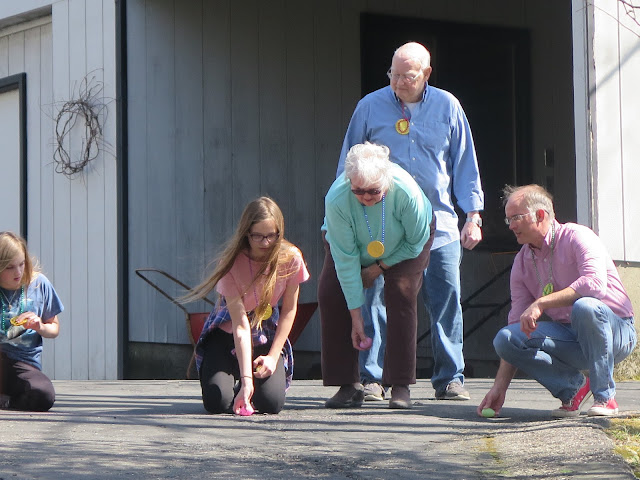 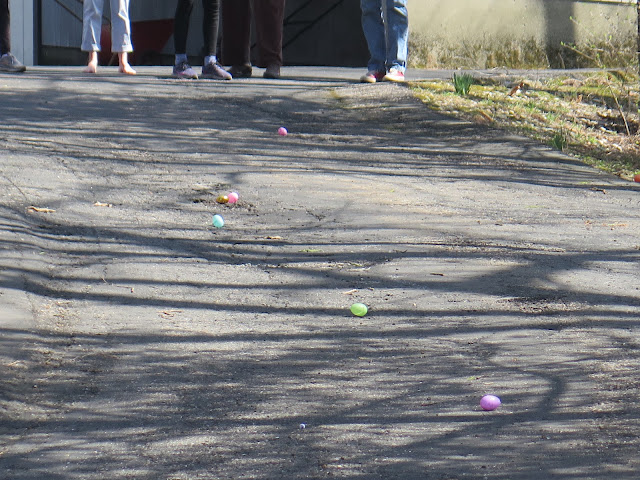 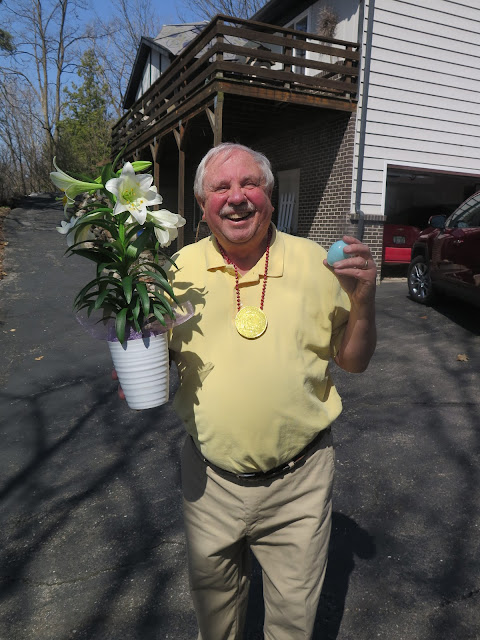 Look whose blue egg won the day!  He's very proud of his prize AND winning. And yes, that's a gold medal he devised with beads and chocolate coins and a glue gun.  Everyone got one of those to wear. SOME in the group thought he had an advantage because he pre-tested the course the day before and thus knew which ruts, cracks and holes to avoid.  But not so, not so. Once launched, there is no controlling a plastic egg holding two marbles on a long, steep and curvy driveway.