I've never had luck growing morning glories.  I've seen them growing between cracks in the side walk, I've heard of people who mow them down because they grow so prolifically, I've seen them so lush they take your breath away but no matter how hard I tried I couldn't get them to grow for me.  Can't seem to grow a tomato either, but that's another story.

My sister-in-law was one of those people who would mow, pull and ignore hers and yet got lush vines that were gorgeous.  She gave me a jar of seeds a couple of years ago and I was a nay sayer. Pouting that it was a waste of time.  But what the heck, I decided  to try it her way.  I dumped the whole jar of seeds into one single hole in the stony ground we have here.  The next year I got a nice vine and a couple of flowers.  I tried it her way again and let the seeds of those few flowers fall where they may. Last year I got a nice vine and several flowers, three different colors.

Again, I left them alone and this year I have beautiful vines and gorgeous flowers and I think it's going to work! 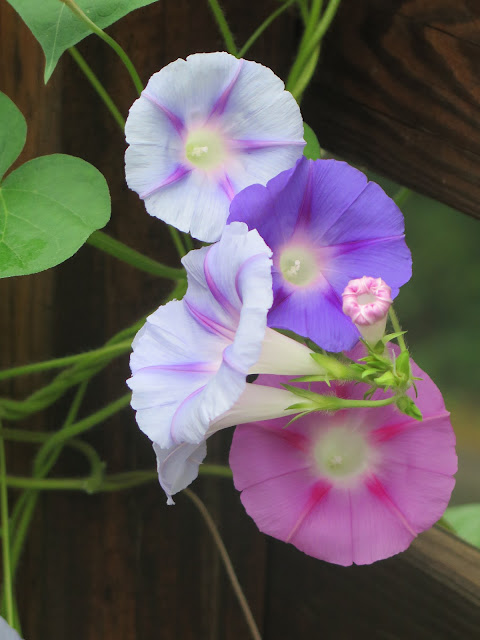 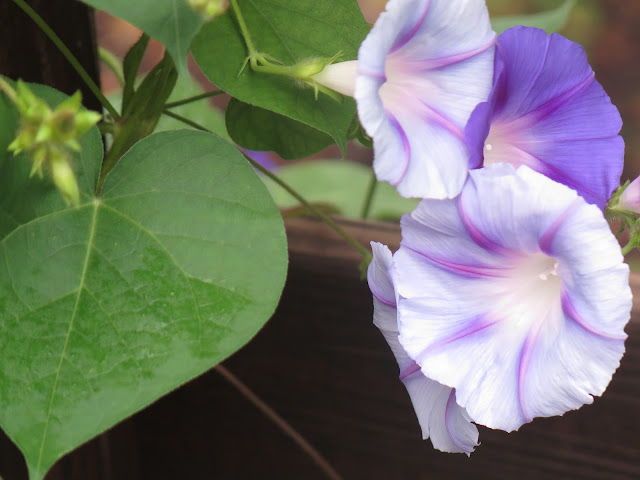 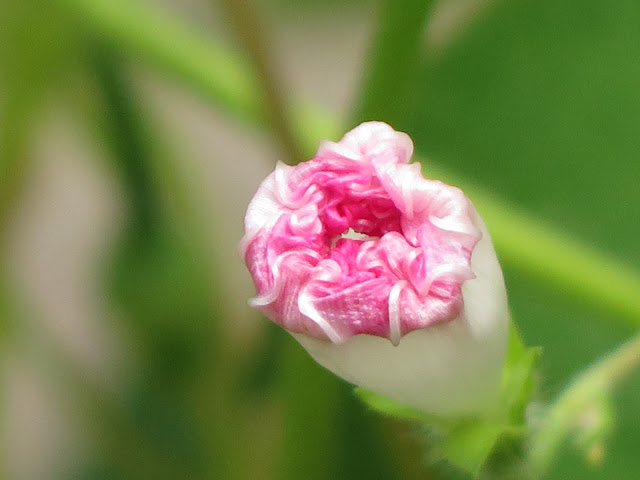 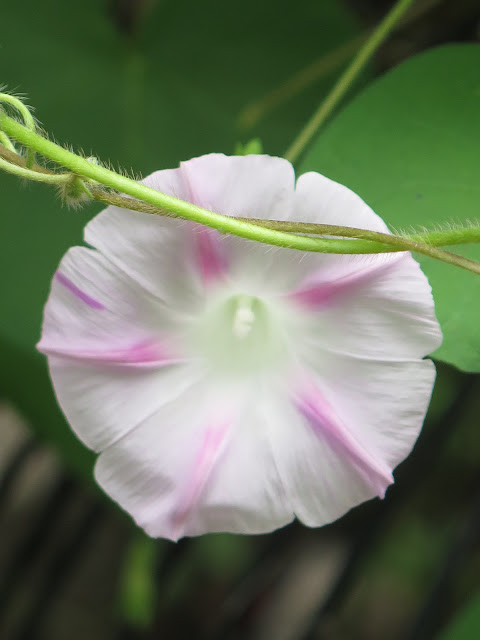 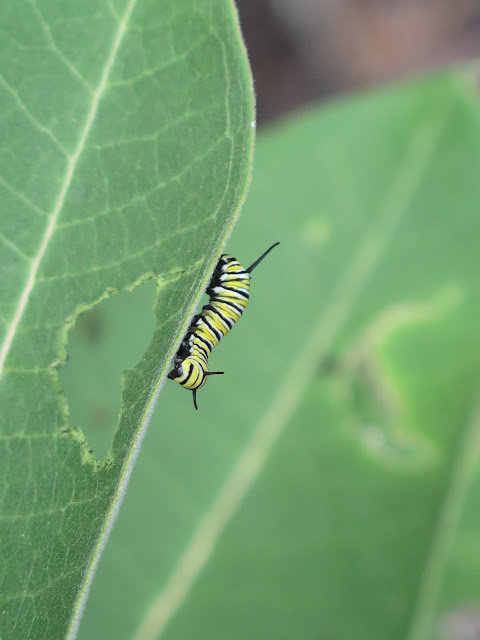 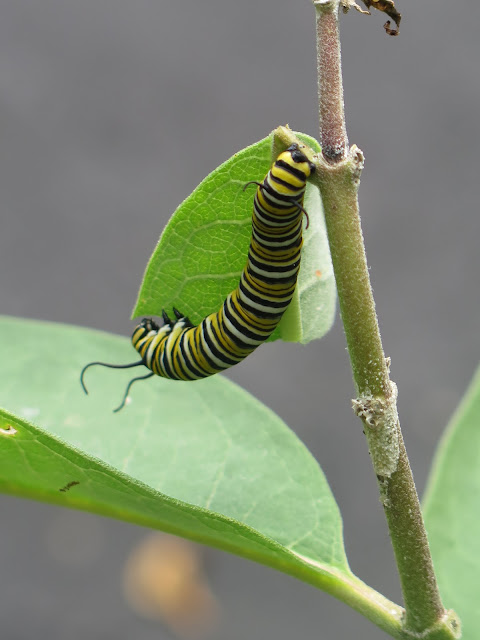 soon became this chubby thing.  Eat and eat and eat. 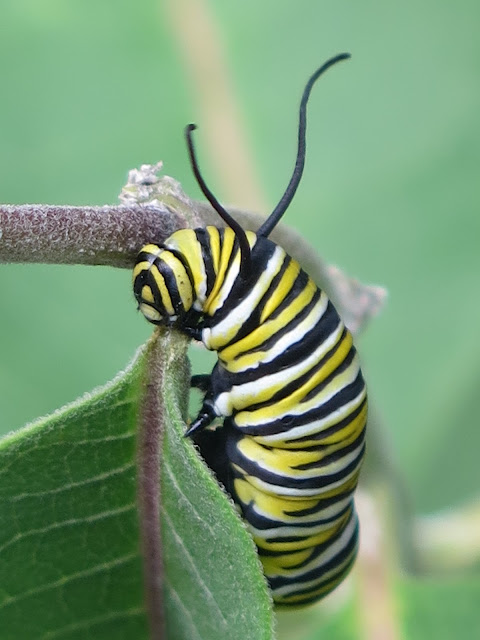 I'll check tomorrow and the next day to see if the chrysallis has formed and in about 10 days this chubby thing is going to emerge a beautiful monarch butterfly.  Right in my yard.
Posted by Denice Barker at 8/30/2019 2 comments: 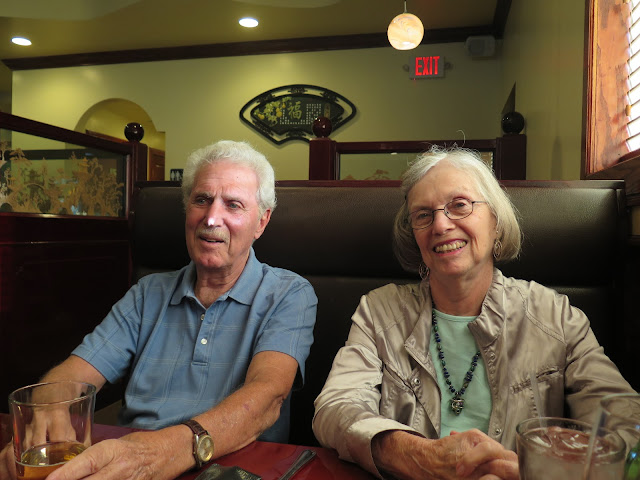 There are many reasons why we make changes in our lives.  Sometimes we have to, sometimes we want to and sometimes it's a combination. I don't like change.  I like variety but not change.  When something is right, I want it to stay that way.     This summer was a hard one for me.  I've lost three great, wonderful friendships in a few short weeks and let me tell you, I don't like it. Two were to death, and this one to circumstances.

Bob and Dodie were our neighbors at the lake and we became fast friends.  They live in Chicago and Florida but spend 5 weekends each summer at a little cottage they share with family.  Everytime they came to the lake they called and every time they called we cleared the calendar and met them.
Dodie is a quilter and we laugh that her taste and mine are at opposite extremes.  She loves modern and I love traditional.

We talked politics and religion, and every other thing you aren't supposed to talk about in polite company because it upsets people.  We talk and learn and come away all the better for it.  They are very pro-active in their politics and keep us on our toes.  For them there is no "what difference could I possibly make?" They believe and strive.  When Trump opens his mouth I scream and throw cupcakes at the television.  They send money for the opponent's campaign.

This past weekend they came so Dodie, her grand daughter and I could go to the AQS show in Grand Rapids.  What I was not expecting and never saw coming was to be told this was their last weekend at the lake. They wouldn't be back.  Ever. You know that saying about being hit upside the head?  That was me.   But the decision had been made, and so it stays even if I wanted to throw myself to the ground and kick and scream and have a three year old hissy fit.

PH and I have been talking about it ever since.  Now, instead of seeing them five times a summer we will be lucky with once a year and have to work a lot harder to make that happen.  There is email and the telephone but there is nothing like sitting across a table from them and soaking them up.  I do so hate change, especially when it involves friends of the heart. 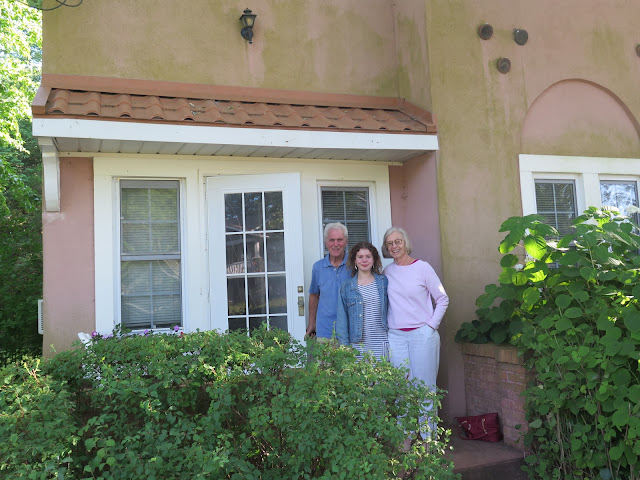 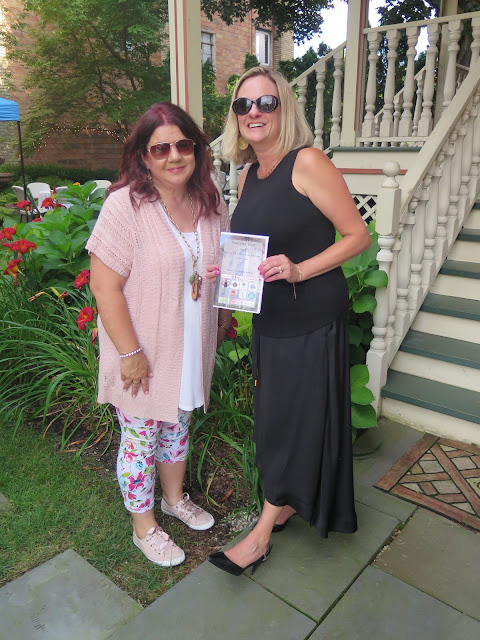 Last week our Lowell Museum, headed by our daughter, (she's the blonde) held their annual major fund raiser.  It's an evening of friends and food from local restaurants, drinks from local breweries and let me tell you, if you go home hungry or walking the line, it's your own fault. 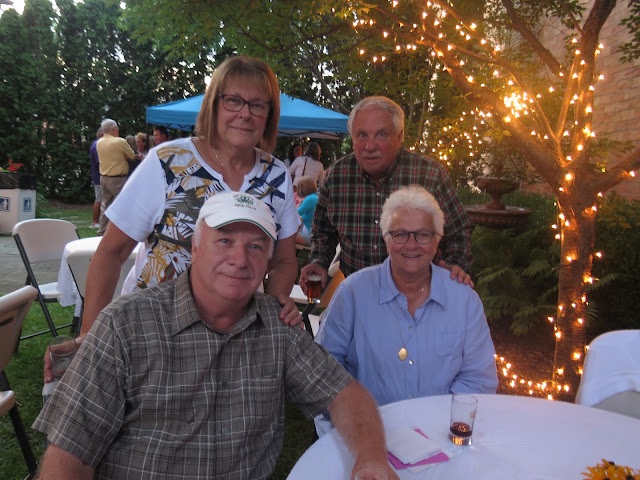 We've been going each year with Friends Harry and Marge.  It's tradition. 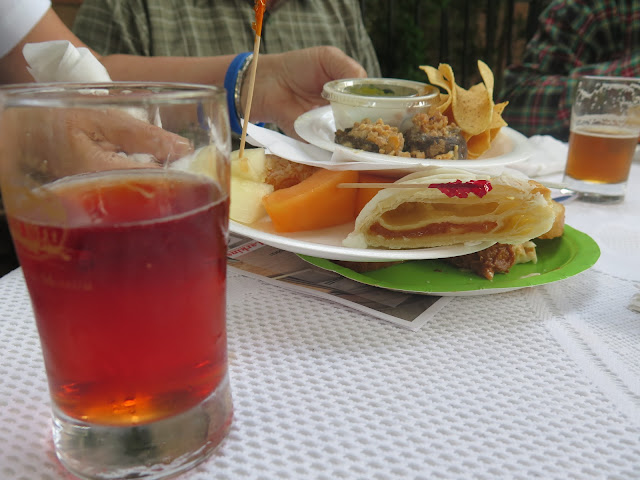 Someone, who will not be named, (not me!) needed two plates for one of her trips to the food. 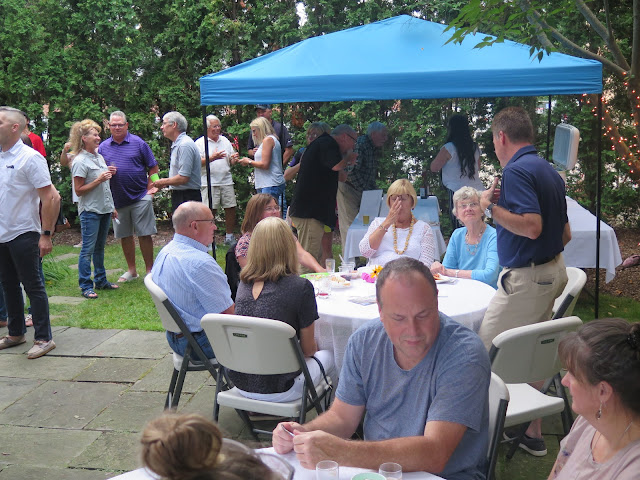 We had a beautiful summer evening in the museum's garden.  People floated all over the museum, the garden, filling plates and glasses, visiting and laughing. 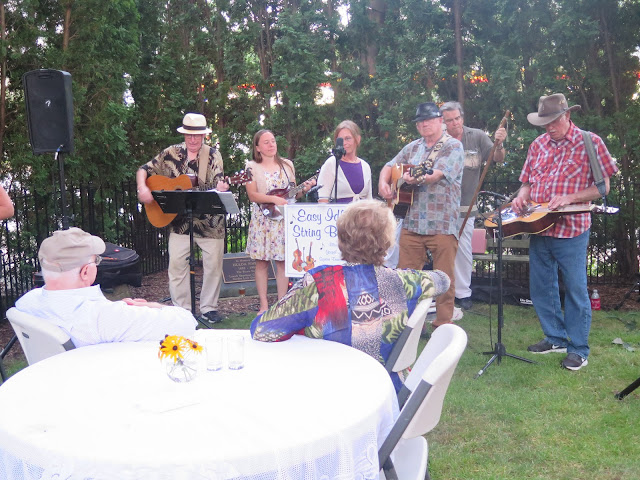 The Easy Idle String Band plays and they are the perfect band for this.  They don't play so loud you can't talk to the person next to you.  They are there for our enjoyment, for  background music and to drown out the traffic on the other side of that hedge.  They are excellent. 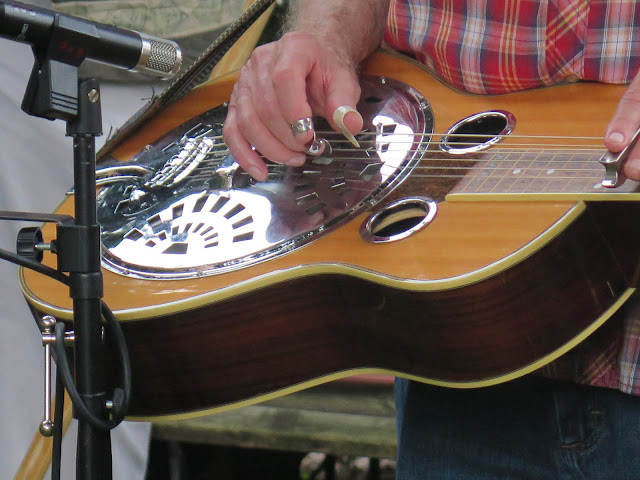 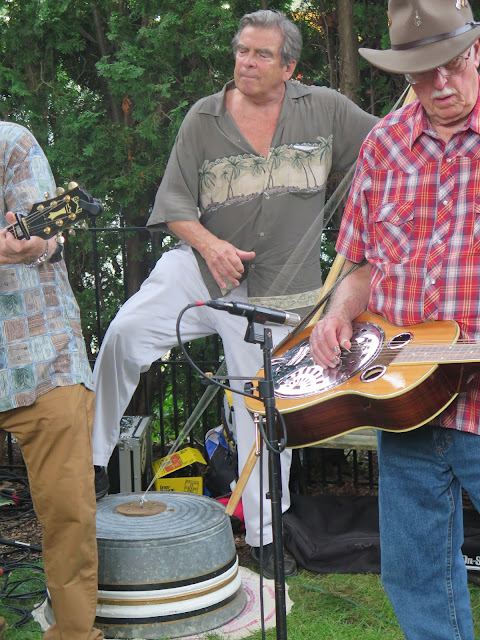 I loved this washtub bass. It was the only instrument the bass player brought. 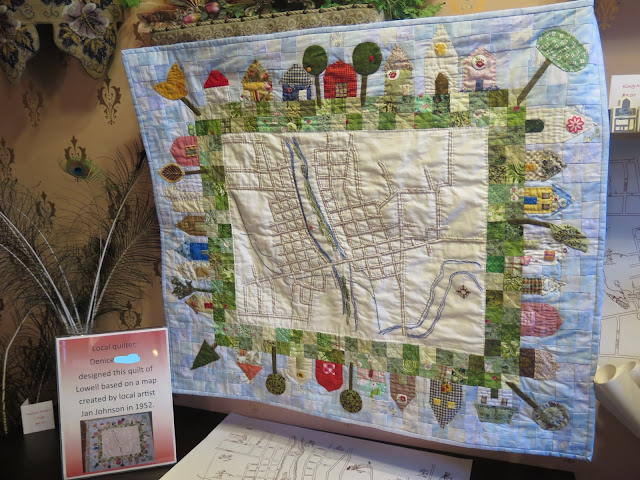 And ta da!  Here's my map of Lowell quilt.  Our daughter hung it for the evening above the original map drawing.  It was a treat to see it hanging somewhere other than our house.

This event is always so much fun and the evening goes much too fast...although if it lasted any longer there are a people who would have to walk home.  Just sayin'
Posted by Denice Barker at 8/21/2019 1 comment:

We've been enjoying a stretch of fine weather so Friend Marilyn, Rosie and I decided to do some porch sewing. 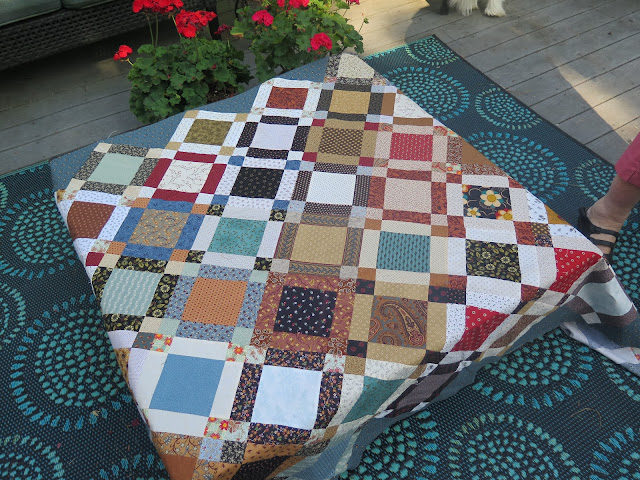 She just finished this top - and it caused her angst and three rippings when she noticed she didn't get the arrangement right.  Three! 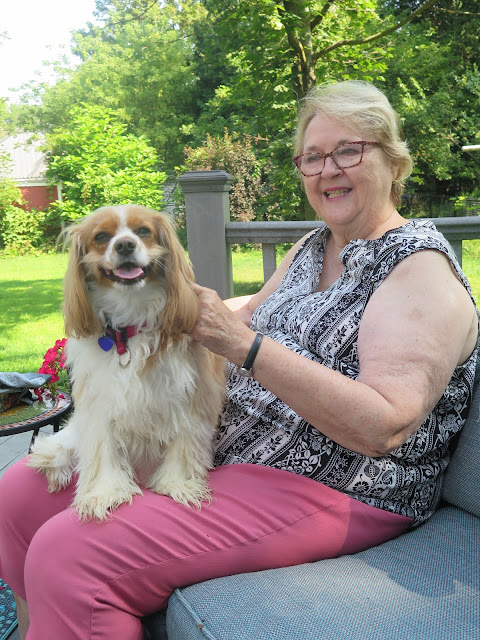 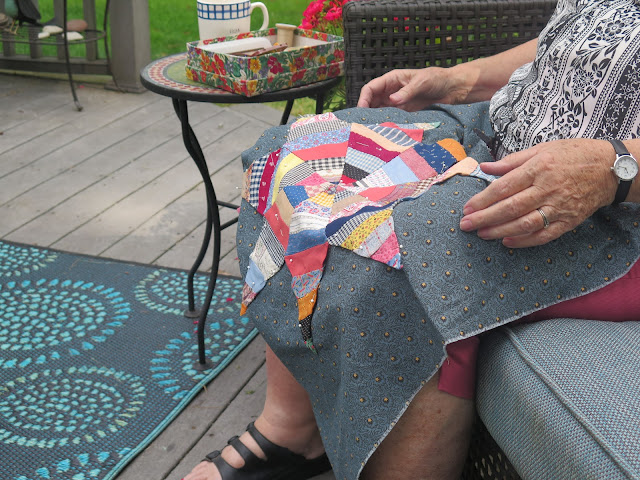 We are both working on these scrappy stars given to us by Friend Jan.  It's a good portable project to have at hand.  We each have nine, I think.  Maybe twelve?  I'll know for sure when I run out of them. 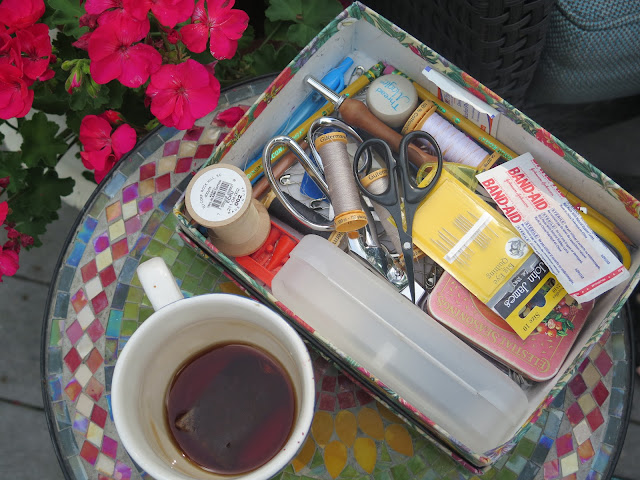 I find myself always taking pictures of a quilter's work box.  I think work boxes say a lot about how what kind of hand quilter you are.  Choices of needles, threads, scissors, marking pens/pencils and of course, the band aid, which yes, she did use that day.

We had a good chat, a good lunch at a nearby restaurant, some tea and treats all on a nice summer porch day.
Posted by Denice Barker at 8/16/2019 2 comments:


The Dearly Beloved by Cara Wall


If I post a book recommendation on this blog it’s because I liked the book. Let’s take that one step further, if I finish a book it’s because I liked it. Sometimes I close a book after the last page and think, “that was nice” and sometimes I think “good story, but I wish I loved it.” The Dearly Beloved stunned me.

Charles and Lily and James and Nan, four people who both complement each other and are polar opposites. Charles and James are minsters and the story of how they came to their faith completely explain the term “a calling.” Charles thought he would teach history, James didn’t know how he would escape his upbringing in Chicago with an alcoholic father and a mother who didn’t know how to cope. Charles attended a lecture that changed his life and James was given a gift of money to further his education. He saw the injustices of the 1960’s and approached his faith as an activist, righting the wrongs of the turbulent time. Charles saw his faith as an intellectual approach to understanding.

James marries Nan, the daughter of a Mississippi minister and proper Southern minister’s wife. She is taught how to be good to everyone, how to be a partner to a minister. Her role is active, consoling, engaging with the community and being present for everyone and anyone. And she is ok with that. It’s what she knows.

Lily and Charles couldn’t be more different. Lily’s parents die when she is young and she closes herself off from everyone. She isn’t going to be that kind of hurt again ever. She hides from everyone, despises what being a minister’s wife means and tells Charles right up front she doesn’t nor ever will believe in God. But he can’t live without her and deep down believes he can change her mind.

Charles and James, put together, would be the answer to any church’s need for a minister, they are different, fulfill different needs and preach differently but complement and work together like puzzle pieces. They are hired as co-ministers at Third Presbyterian Church in New York City.

By now we are well acquainted with these four and how many times did I say to the page “you married the wrong one!” Lily and James, Nan and Charles, that’s how it should have been. But no, if opposites attract, the author gave each to the right one. We feel like we know them so well, their struggles with faith, with their lives, with accepting themselves and each other in the face of near backbreaking pain and how sticking it out is the only possible answer.

This is a jaw dropping story in the absolutely capable hands of Cara Wall. Yes, the glue in this story is about ministering and faith and struggles with faith and that’s ok. This story isn’t so much about what life is like for ministers, it’s the story of four people who become one together. This, even in the hands of a non-believing reader of any denomination, will invite you to put the book down, think, dog-ear pages, write in the margins, and call a friend.