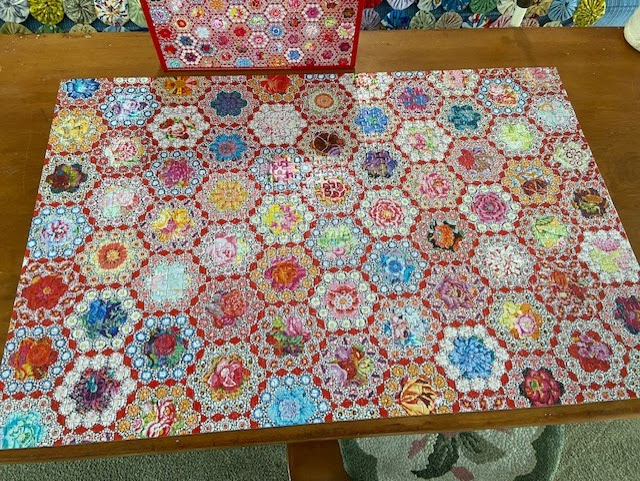 He finished it!  In record time, too, for a puzzle this  hard.  But he had a plan and it worked.

I'm trying to nudge February on.  Normally, I love the calm after the storm of January - holidays are over, things settle down, no baking, wrapping or cooking for anyone. I like the lull of January. February can get old, though. The weather can be nasty or nice and sometimes both in the same day. So we find ways to be busy. 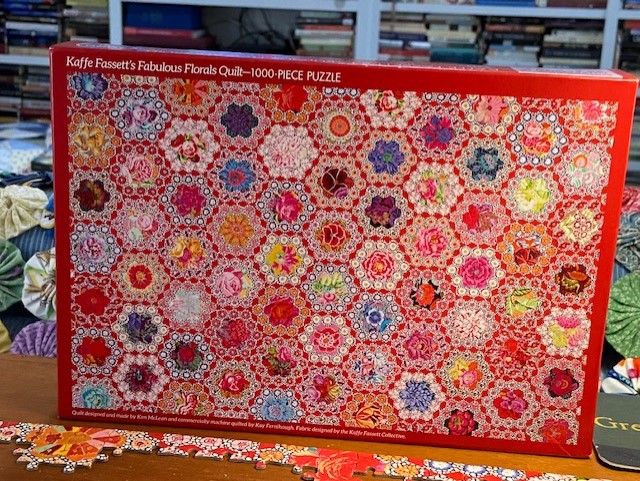 PH has become a puzzler.  He started during the lock down years. It's been good for him and he's good at it. This one, I thought when I bought it, would be a challenge but didn't realize how much of a challenge till  after it arrived and I saw it up close.  I immediately told him, "ok, this one is all yours."  Usually we share working  a puzzle.  I can spot mistake fittings better than he can because he spends much longer at it and after awhile those close-but-not-right pieces just look right but aren't.  So I'm The Fixer.  I also am The Finisher.  When it gets down to the last 50 pieces or so he will turn it over to me. 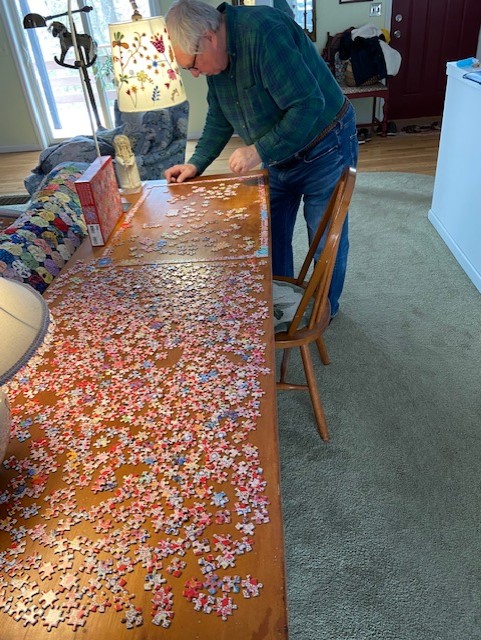 This table we  dragged back from his brother's cottage a couple of summers ago turned out to be the perfect puzzle table.  It's big enough for the 1,000 piecers, it fits perfectly in this place in the room so he can work the puzzle and watch a movie on TV.  But it's like potato chips.  He can't just walk by without trying to fit a  piece and one turns to another to another to another. 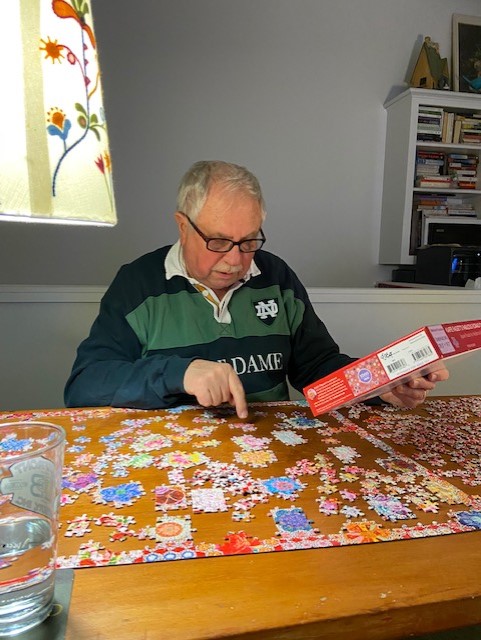 So before you know it he's sitting down and spending real time.  I am  really surprised at how organized he is.  Believe me, a close up look at this one sends shivers down my spine.  But puzzlers have a technique that works for them.  When he and my cousin get together and compare puzzle techniques you'd think they were discussing something serious. 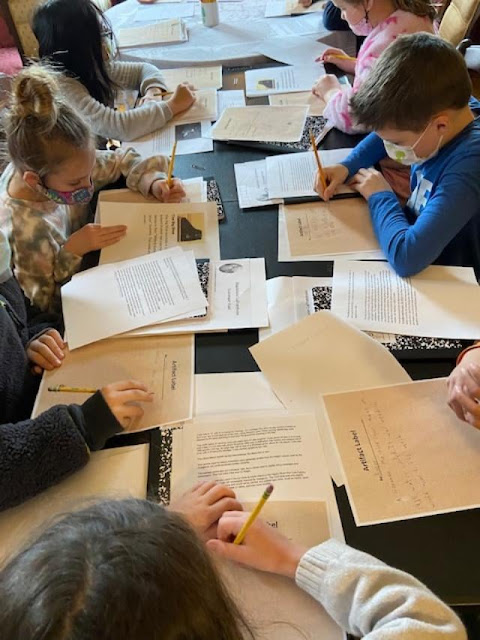 I have been helping at the museum with the third grade immersion program.  All of the third graders in the city come and spend two full school days at the museum immersed in our local history.  They learn how to design their own museum, they learn mapping skills, they learn about the people, the Native Americans, the fur traders, settlers, the immigrants, the way a museum works and why, they learn about archives, they choose an object in the building they want to know more about and write their own artifact labels for them.  It's an intense full, full two days but is so much fun.  In January we had an 8 day group, this week and next there is a 10 day group, in March a six day group (each group is a school, each school has certain number of third grade classrooms, each classroom is there for two days.)

Thus not a single needle has been picked up so no stitching has been done.  Not on museum days.

We were going to do dinner last night with friends. We celebrated three of our birthdays that all converged.  I made a cake.  You have to have a cake for birthdays, right?

My friend thinks everything that comes from my kitchen is magic.  I can do no wrong. It's all wonderful and she said she wants to live in my freezer.  Well.  No pressure there, right?

I decided the cake would be a cake I made before and it's delicious and moist and chocolate and made with lots of malted milk powder - in the cake, the filling and the glaze.  It's a winner.

But not this time.  I spent ALL DAY Friday on this cake, the steps are many, cooling time is needed, but it's worth it - usually.  This time I couldn't get the filling right.  I spent hours trying to make it right, to fix it, to fiddle with it, to figure out what the problem was.  I knew mostly the problem was something called Clear Gel from King Arthur Baking and I didn't have any this time.  It's expensive for the amount you get and I didn't reorder after I ran out so, as usual for me, I tried to improvise.

I improvise ALL of the time when I cook but generally know not to try it when baking.  Usually.  But I had to this time.  I tried everything in my magic box of tricks and nothing could or would fix this. 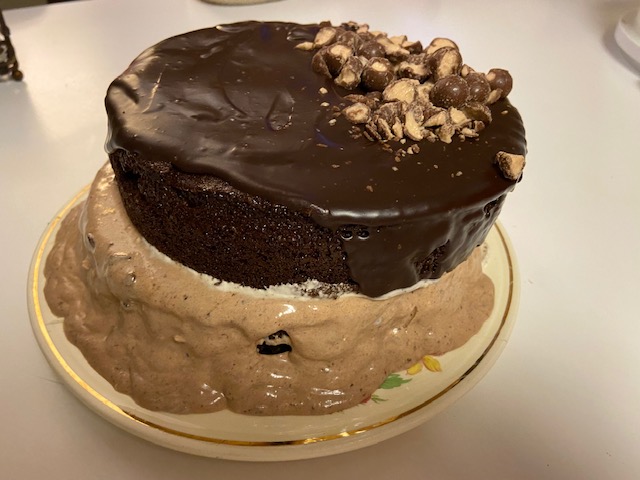 That ooze?  It's the filling.  I even tried to stabilize it by putting it on the front porch in 1 degree temperatures.

But you know what?  I served it anyway.  I spent just too much time on this thing, it still would taste great,  and above all I wanted to prove to my friend that not everything that comes out of my kitchen is magically perfect. 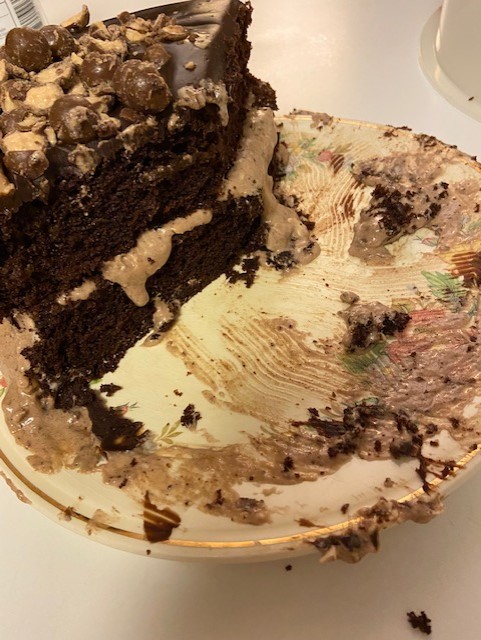 And we all practically licked our plates clean.  It was delicious even it if looked like a final result on Nailed It!

There are times, well, most times, I DO improvise and change things up.  When baking that can usually only mean change things up with flavors.  In the midst of the baking of the cake I had it in my mind to make cinnamon rolls but not cinnamon rolls.  I thought lemon instead of cinnamon would be nice.  Lemon and blueberry.  So I made some lemon curd and opened a small jar of home made blueberry jam 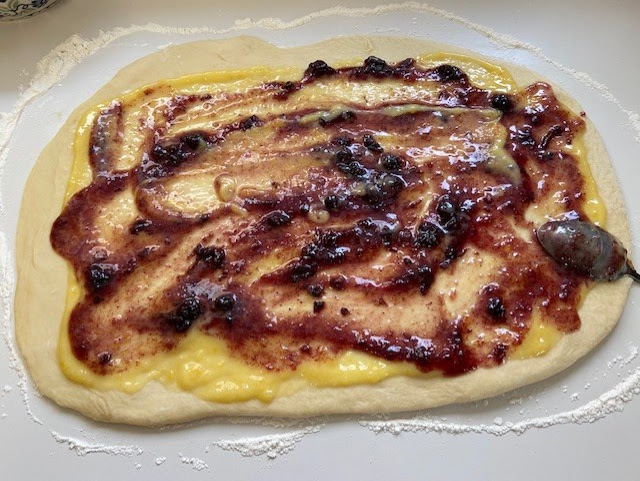 It was gooey because I used more curd and berry jam than I should have but that mess was easily wiped away. 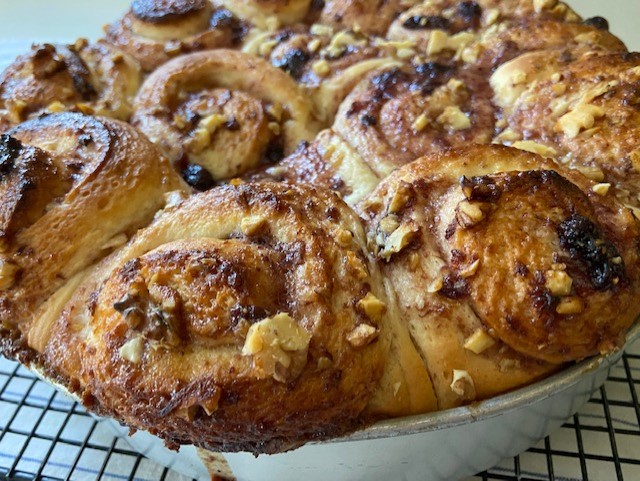 This improvisation worked beautifully, deliciously.  No cinnamon needed.  I divided up the  booty and shared it with the group. 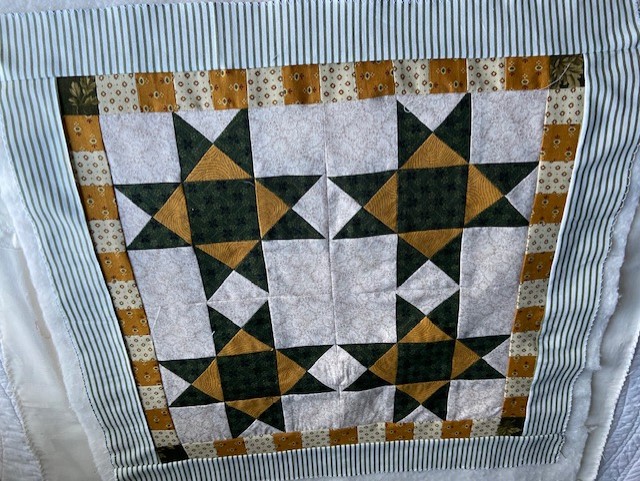 Improvisation number three.  These stars are another of Friend Sally's cast offs, I put them together and bordered them and  by the end of today this will be another pillow. I will *gasp* machine quilt it (that's the improvisation.)  I can hardly say that out loud but I think after ironing it really good, pinning it really well and going slowly, I can't mess it up too bad.