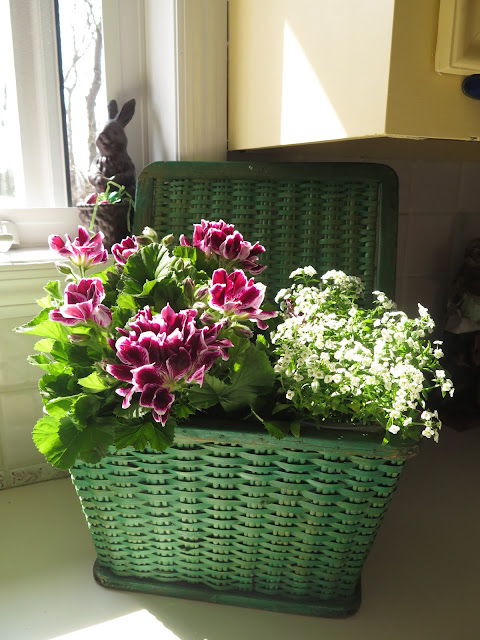 For today at least, the heat is turned off, the windows are open, the sun is shining, and I spruced up a corner in the kitchen with real, live flowers.  For today, at least.
Posted by Denice Barker at 3/28/2019 1 comment:

There was a bonus bag of scraps with the feedsack fabric. Some cut squares, diamonds and folded together, these butterflies.    As I unfolded them I smiled when I saw they were truly an unfinished project.  These butterflies aren't feedsack, just original 30s and 40s. 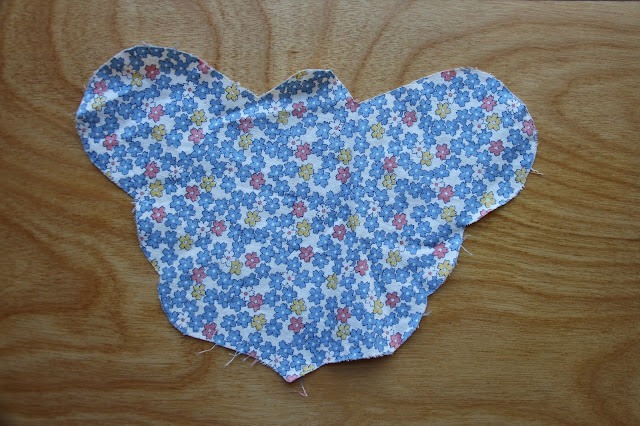 There are two of these 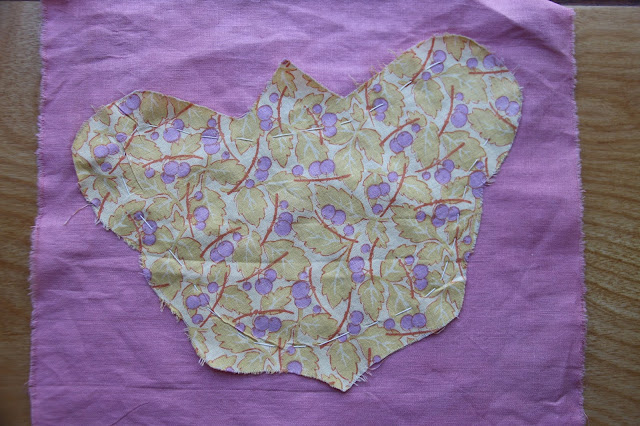 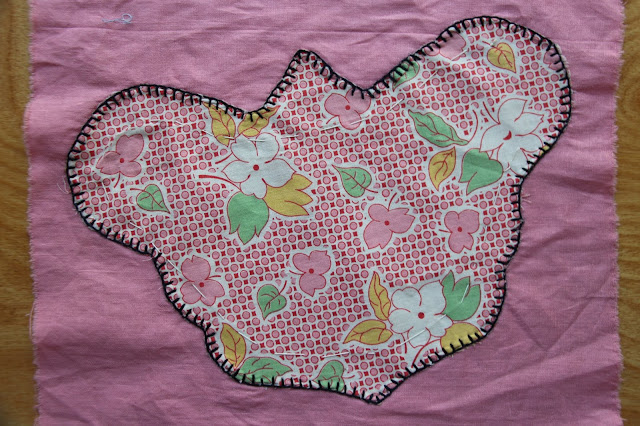 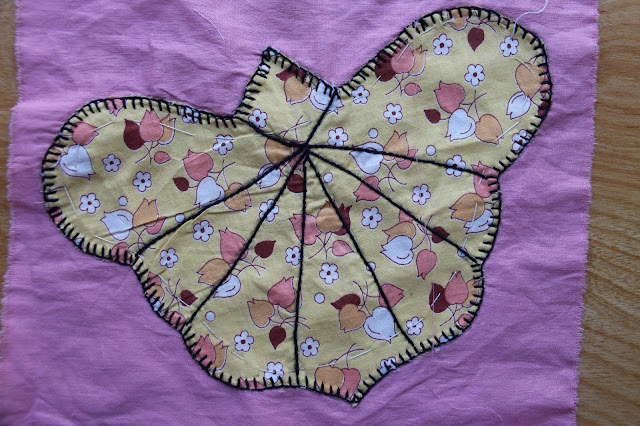 And one finished. This really made me smile and as I ironed them I promised the woman who started them that I would finish it for her.  They will make a nice little wall hanging.
Posted by Denice Barker at 3/25/2019 2 comments:

The other day someone I know in town asked if I would like some feedsacks.  I couldn't decide how high to jump in the air in excitement.   She goes to estate sales and finds interesting things and fixes them up and she and her friends have a sale twice a year.  It's my favorite sale(s) because she finds fun things and doesn't charge enough for them.  So when she asked if I wanted some feed sacks and two old beat up quilts I said absolutely. Are you kidding? She said she was happy to give them to someone who called them treasures. 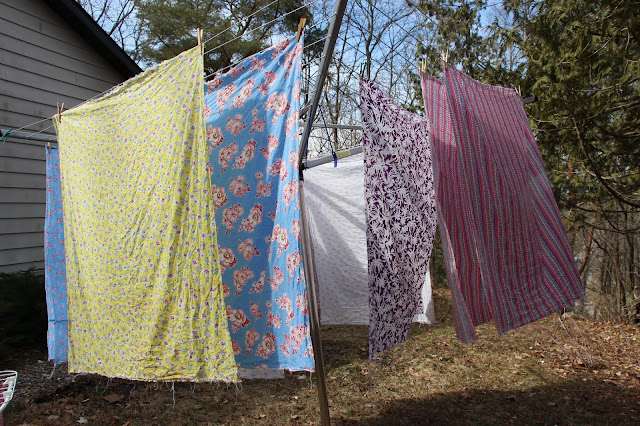 Today is a nice day, winter has decided to give us a day off and we are even enjoying a little sun and a breeze so it's time to hang. 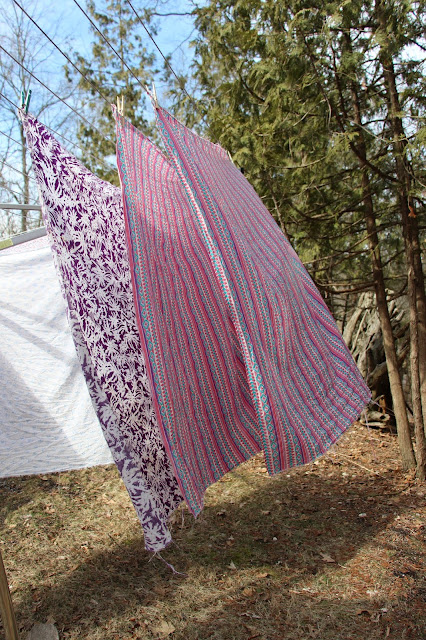 I ran a zigzag stitch around all the edges, gently washed them and now they hang. 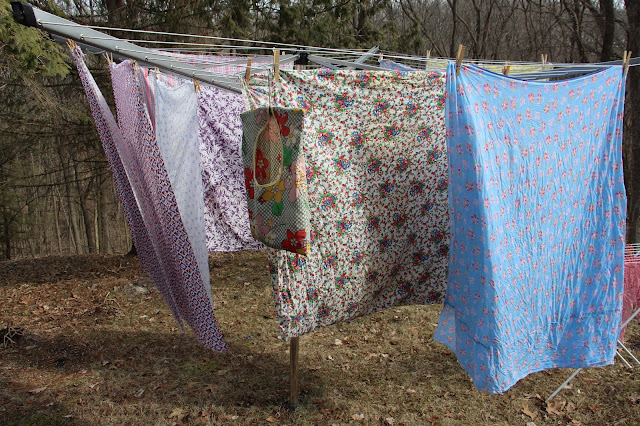 The colors are spectacular and I want to use them, not hoard them so if any of you has an idea for an age appropriate pattern, let me know!  I can't believe I'm saying this but I'll even use the machine if I have to. 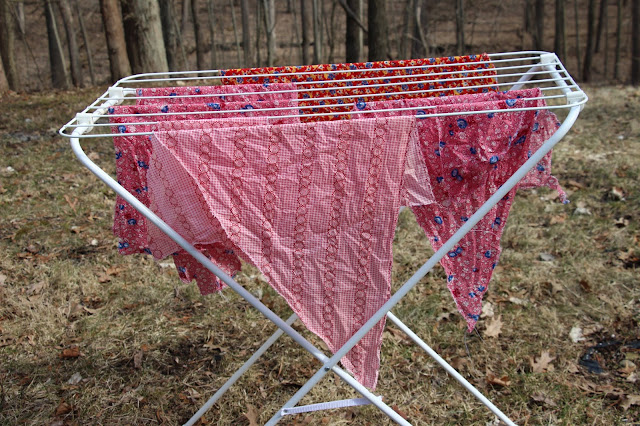 Some were even cut into little dresses but not finished.  Just the pieces are here.  If I had a grand girl small enough I'd finish them but as it is they will be incorporated into whatever quilt top I end up making. 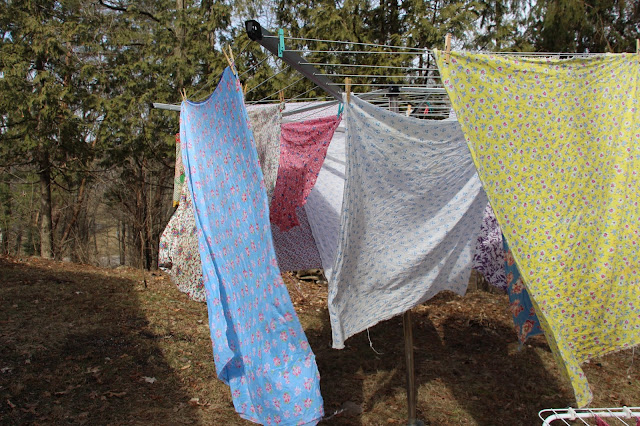 If My Moon Was Your Sun 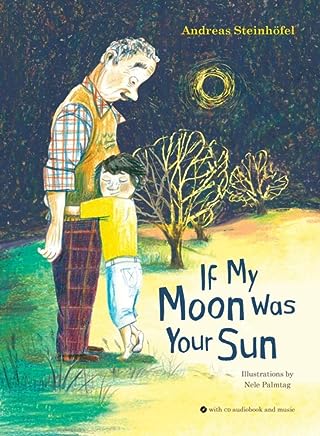 If My Moon Was Your Sun by Andreas Steinhofel

This is the story of Max, who is just nine years old and today is going to kidnap his grandfather.
Max's grandfather is his best friend in the world and recently was moved into a nursing home because of his memory.
Max has a plan and this is the day, a beautiful day, a day that was going to help the longing in his heart for his grandfather.
It's easy, really.  Max visits his grandfather so often he is trusted with the lock down code on the door. Today, with a plan in his head, Max tells his grandfather they are leaving.  Somehow Miss Schneider comes along with them but that's ok, she's harmless and a little in her own world but also grateful for the fresh air of a beautiful day.
Max and Grandfather and Miss Schneider take a bus out of town to their favorite place to once again be together and remember better times. It is here with the sweetest, tenderest help from Grandfather that Max comes to terms with what is happening to him.
As I finished this story and wiped the tear I wished on the full moon outside the window that someday one of my grandchildren will kidnap me.
Posted by Denice Barker at 3/21/2019 1 comment:

Labels: Andreas Steinhofel, If My Moon Was Your Sun

Friday was National Quilting Day and no, I didn't.  I painted the hallway instead. And I'm trying to catch up on my reading since PH and I are staying up very late to watch episode after episode of Midsomer Murders  so my late night reading time is suffering. 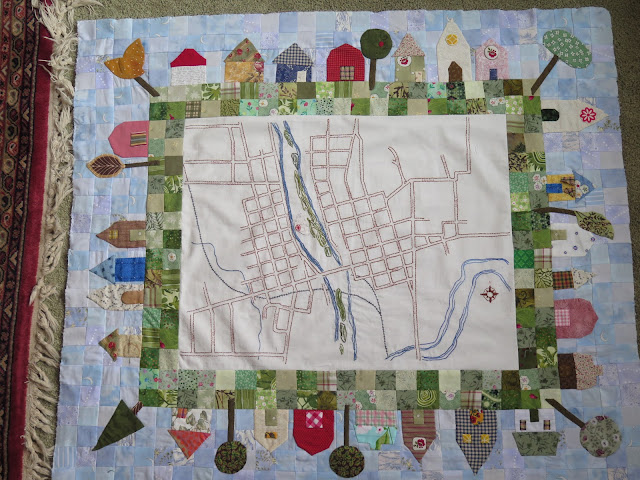 But I am tinkering with my map.  It's off the cuff making it up as I go along little snippets and bitsy bits of fabric around a street map of Lowell. 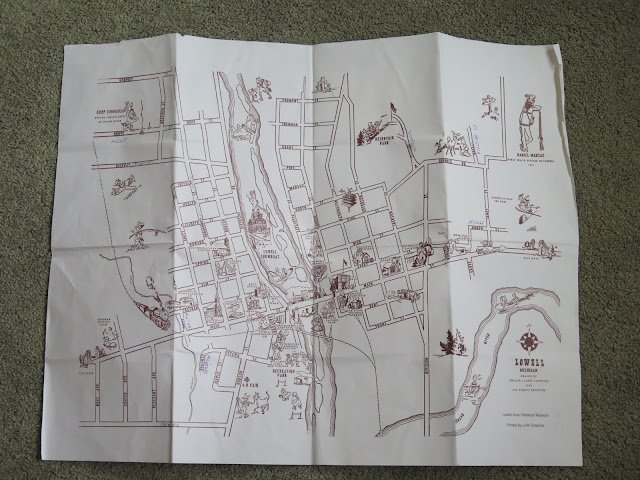 The original map was drawn by a local artist in 1952.  I traced it and put in the streets names but have since been told some street names have changed so I kept the old and put a  /  between the old and new. 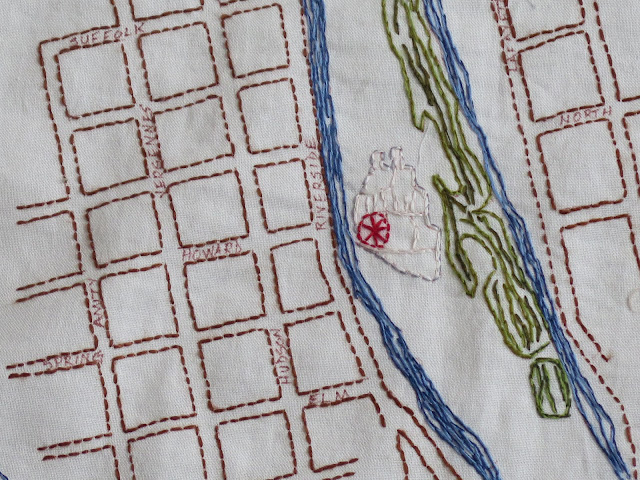 I embroidered the streets and wrote the names in permanent marker, the rivers and islands are represented and the showboat is, too. 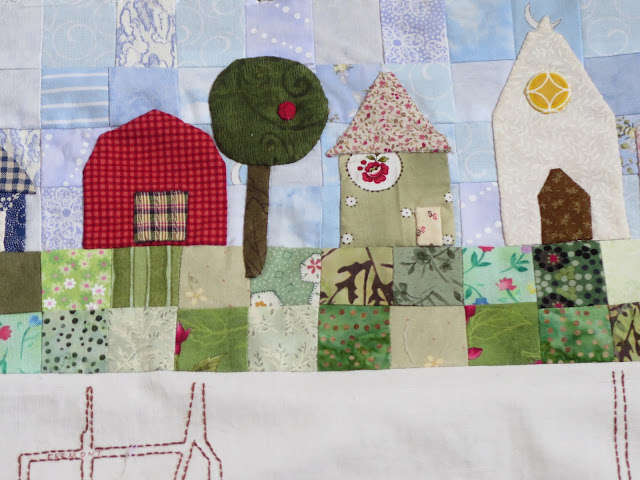 The trees are lollipops because I'm not crazy.  That's an apple in this tree representing the orchards around the area. The churches will get embroidered crosses on the doors. 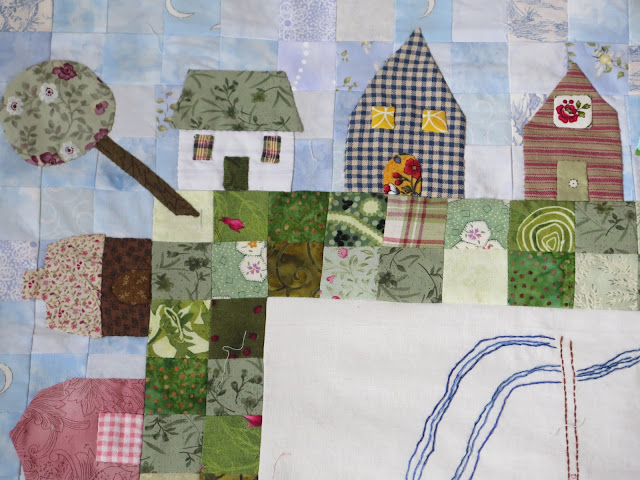 After I get the houses and trees in place I'll add touches of this and that, flowers, embroidery, maybe a window box here and there.  The trees in the four corners represent the four seasons.  This one is spring. 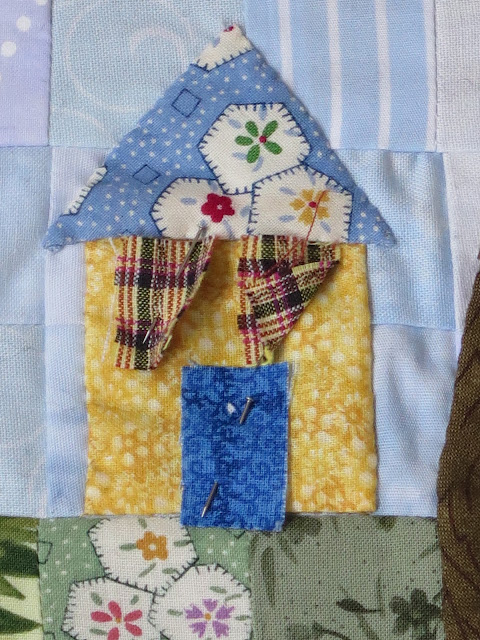 Everything is done by hand.  Needle turn, eyeballing and funky colors.  Some of the bits are really bitsy but I'm not a fuser so everything is needle turned. Some of the houses look like they belong to garden gnomes but honestly, if you're going to look that closely then you're missing the point.  I'm just having fun.

In Miniature: How Small Things Illuminate the World 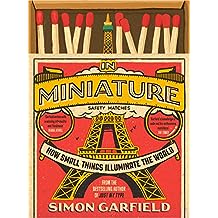 In Miniature: How Small Things Illuminate the World
by Simon Garfield

What is it about small things that fascinate us? There’s nothing like a dollhouse or a tiny anything, that will bring our noses closer and closer to see it well. To see if the miniaturist got it right. We want to see the detail, the tinier the better. If you doubt, then look up images of Queen Mary’s Doll House and you’ll be awed.

Author Simon Garfield says that the premise of his book is that “the miniature world reveals and illuminates a bigger one.” He starts by reminding us that for awhile big was the thing, then we turned to the fascination of miniature – the smaller the better (he makes us really WANT to see a flea circus) and now we are back to big again – how big does a home television screen really need to be? But it’s not size, he says, it’s really scale. He addresses the miniature world with this in mind: a miniature must be a reduced version of something that was originally bigger. He explains the fascination with miniatures is really a matter of control. We can more easily understand that which is too big to see until we see it all at once, laid out in front of us with the chance to manipulate it. That makes sense when you come along with him.

We begin our time with the author when he takes our hand and leads us in 1889 to the top of the top of the Eiffel Tower. From that perspective the big world became small, miniature, immobile, a model of itself.

We learn that the only way to make people understand the horror of a slave’s journey was to make a miniature of a slave ship. We can shape the outcome of war by playing with toy soldiers, we marvel at just how small a book can be, and paintings, and who knew Rod Stewart was an avid model railroad enthusiast? And if you are lucky enough to see it in person you can only stare with true fascination at Queen Mary’s doll house, a project that had 1,500 people involved in it’s making.

We even take a trip to Las Vegas where one would think there isn’t anything in miniature, but there they are, a working volcano, a pyramid, a rainforest and, look! The Eiffel Tower.

I can say with real fascination that I’ve never considered miniature in relation to true size until I read this book. Take a look around you and notice what you may already embrace in miniature. Toy soldiers? Gingerbread houses? Trains? Buildings? Crafts? You’ll love this book.
Posted by Denice Barker at 3/12/2019 No comments:

The Catalogue of Shipwrecked Books: Christopher Columbus, His Son and the Quest To Build the World's Greatest Library   by Edward Wilson-Lee


Hernando Colon was his father’s son. His father was determined to widen the world, forge new paths and bring untold riches and knowledge to the known world. And he did, in his way. Hernando’s father was Christopher Columbus. Hernando was the illegitimate son, but the one who matched his father in foresight and this is his story.

Columbus’ dream was to find a quicker and easier way to bring the riches of India to Europe and make through his voyage everyone involved richer, himself, his monarchy, his country and the people. On his last voyage, Hernando traveled with his father and saw for himself what the world, both old and new, had to offer but it wasn’t gold so much as new knowledge.

Hernando was only eighteen when his father died but the quest for the knowledge available to the world if only one could find it was so important to him he spent the rest of his life travelling the world and collecting books, paintings, sketches, pamphlets, writings of all kinds into the most monumental attempt at a personal library in the world. The thing that made his library most interesting was he was more interested in the little things, the mundane, the things people would eventually throw away, the things that revealed real people. Playbills, songs, ballads, bulletins, fables, sketchings, anything that represented everyday life, the big and the small were collected. He travelled Europe and visited bookshops and bought and bought and bought (what a guy!) It was to be a universal library.

We think having the world and all of it’s offerings at our fingertips today commonplace. But in a world where anything out of the city’s gates was considered foreign and feared, the task Hernando set for himself was truly extraordinary.

The remarkable things was the order he tried to maintain. What good is the information if you can’t find it? We all know what it’s like to search for something and grow frustrated because we just KNOW it’s there somewhere. Hernando was a list maker, a cataloger of all he owned and he didn’t skimp on his library. By the end of his life he had over 15,000 books, pamphlets, pieces of music, prints, anything and everything written down, that was his goal. It was a phenomenal achievement. And there was the shipwreck where part of his collection was lost. But even those titles were recorded so we do know what was lost.

What a truly remarkable man was Hernando Colon, to live in a time when the world opened up and be there to receive it.
Posted by Denice Barker at 3/10/2019 No comments: