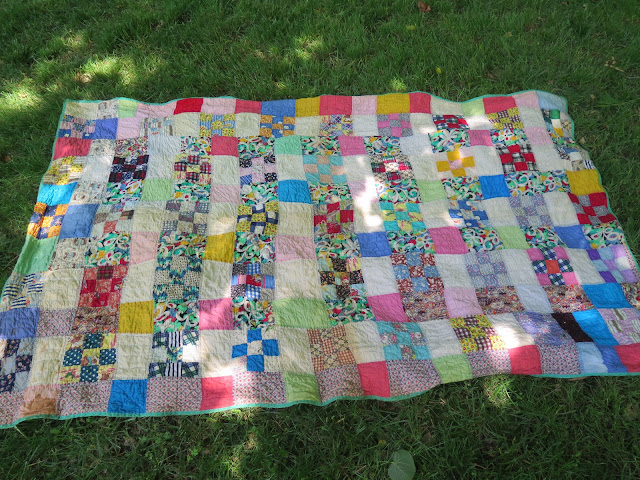 OK, here it is, washed.  It's still in sensitive drying mode. I didn't want to move it around too much so it's not straightened but it's much, much  happier washed.  If it EVER stops raining I think I'll give it and it's sisters another dunk just to, well, give it another dunk.

I got the photo off the camera by taking the sim card out and putting it in the computer.  I tried inserting it into a different camera but that didn't work.  Even in the computer I get an error  refusal to cooperate message if I take too long so something's not working and I'm thinking it's the camera. 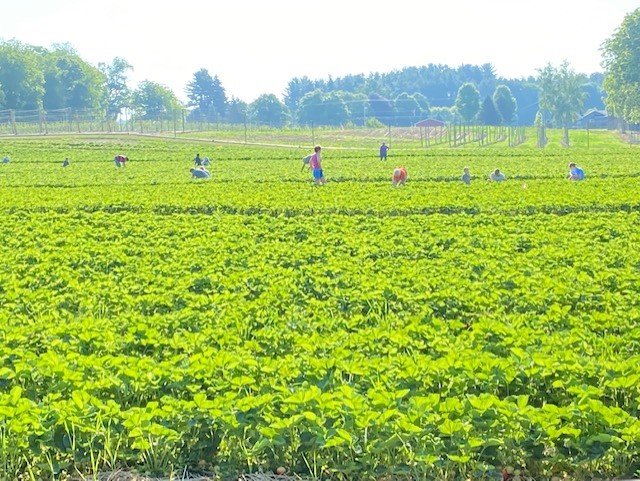 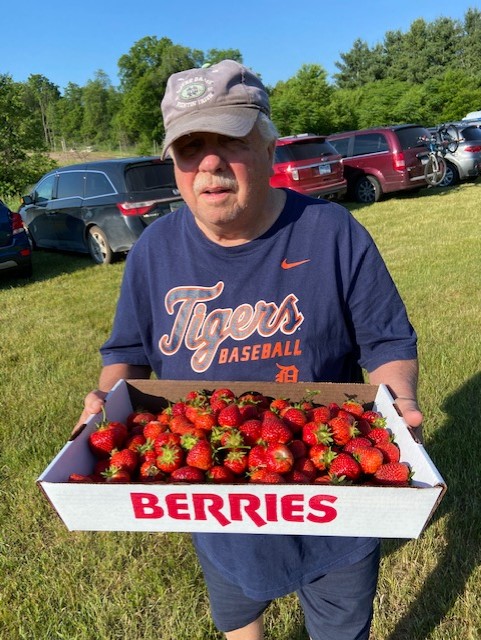 We've spent a lot of mornings picking strawberries these last two weeks.  And we've been eating  a steady diet of  and giving away pies. We've had an enormous amount of rain these past few days and more to come so I'm not sure when we can go again, but we NEED to go for Tuesday evening's dinner with friends who I promised a pie to.  I can't believe the inches of rain we've been seeing is going to be good for berries.
Something is wrong with my camera or the ability of the computer to take the photos from my camera and put them in my computer file.  I don't know yet which way to turn - the computer or the camera but something needs to be done.  I get much, much nicer shots with the camera than I do the phone. 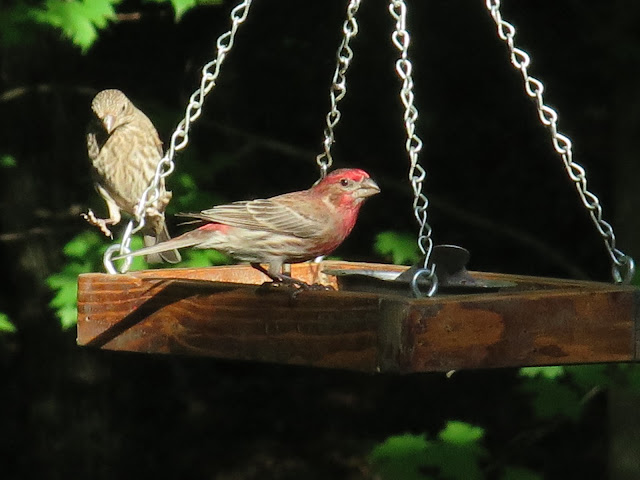 I had a step-great grandma who lived in Kentucky.  She was born in 1865 and died just about a month short of her 101st birthday.  She was a quilter.  I have her Grandmother's Flower Garden quilt and after she died my brother and sister-in-law were given four others.  They used to be smokers and the quilts hung on a quilt rack for a lot of years.  A week or so ago they gave the quilts to me.  I was, obviously, thrilled to get them.  But the smoke took its toll.  You can see how they were folded for years and smoke stained, and to be honest I couldn't have them in a room because of the stale odor. 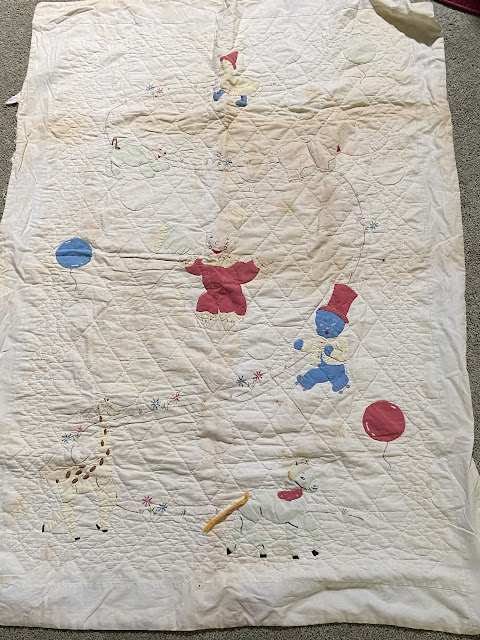 This really old one was particularly badly stained and the binding was just a turn over edging. 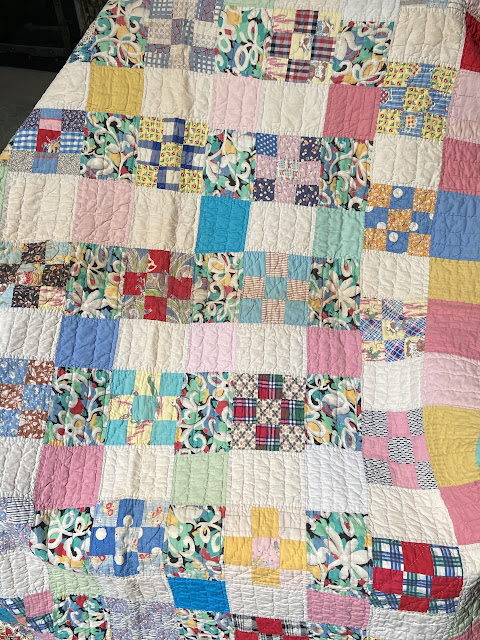 You can see along the crease the yellowing on this one 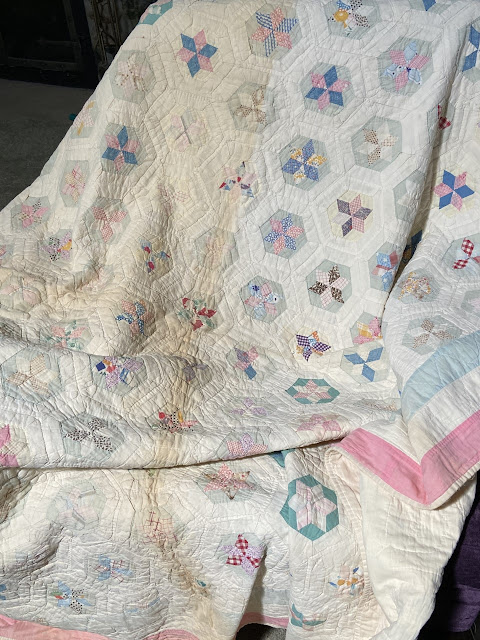 And this one is particularly bad, too.  Well, I couldn't store them, show them or keep them folded unless I cleaned them.  Now, I'm going to tell you what I did to one of them and I am saying right now it's probably going to make you cringe but it's what I did and it worked.  No critics, please.

I took the quilt in the middle picture and worked that one first because it was smaller. I put a sheet in the bathtub.  I put the quilt on the sheet and put lukewarm water in the tub.  You could see the smoke stain leeching out like I was brewing tea.  I lifted it by the sheet's four corners, thus not putting pressure on the stitches or the fabric of the quilt with the weight of the water.  I lifted the quilt, watched the absolutely dark yellow run out.  Emptied the tub, refilled it with clean water, put the quilt back down, and it took six changes of water before the water appeared clean.  Then PH and I picked up the sheet with quilt in it, put it in a blue IKEA bag and took it outside.  I laid the sheet on the ground, straightened the quilt and let it drain.  After a few hours I took the sheet away and let the quilt stay on the grass in the shade awhile longer.  I brought it in for the night when it was barely damp and put it folded on a drying rack, laying flat.  It looks SO much better but I can't show you because I took the photos with the camera and I can't get them off the camera and onto the computer. And I can't retake a photo with the phone because it won't stop raining.  Because it hasn't stopped raining or we haven't been home long enough to work with the other quilts, I haven't taken them on yet but I will soon.

Now, really, if this procedure made you cringe I don't want to hear it.  I did what I did the way that I did it and that's what I did.  And the quilt is much happier.

Walking through our mega grocery /stuff store one day I saw a really cute dish towel that featured an embroidered Michigan on it.  Immediately I thought it would make a cute pillow.  Never could I use it for an actual dish towel because I am very not nice to dish towels. It would be stained and burned very soon.  But a pillow, now that was another story.  So, I bought one.  When I got home I thought daughter and daughter-in-law might like one, too and sent PH back to the store to get two more.

After days and days and days procrastinating because I just knew I'd ruin it with my mismeasuring skill less math I finally tip toed up to them during one of these hot, hot, hot indoor air conditioning days. I have a hard time seeing math.  Once I can SEE it, I can do it but until then I'm a wreck.  Finally, after much, much, much measuring (you know that adage for carpenters: measure twice, cut once?  Well, for me it's measure for DAYS, cut once and still ruin it)  and a final consultation with PH and even then not getting it into my head finally, finally the lightbulb went on.  After that it took about 45 minutes to make the backs of the three pillows.   You laugh but it's all true. 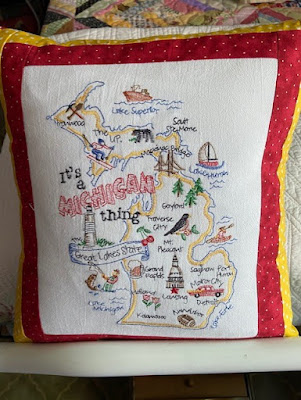 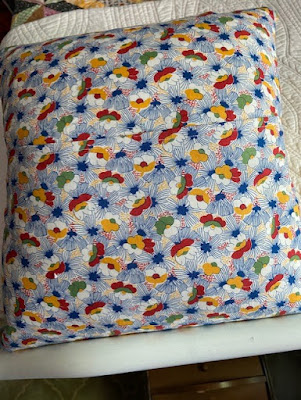 This one is front and back of daughter-in-law's.  They have a nice summer porch and it will be cute there. 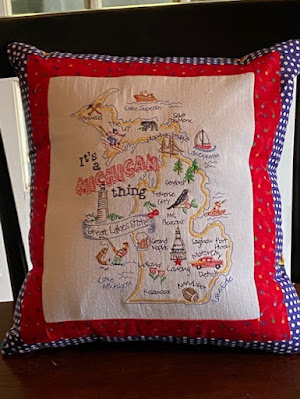 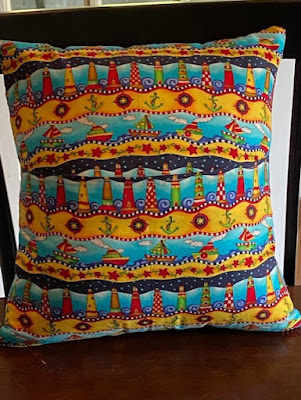 This is daughter's.  They have a sweet little cottage up north very near Lake Michigan where light houses and boats are on the horizon. It will be cute up there. 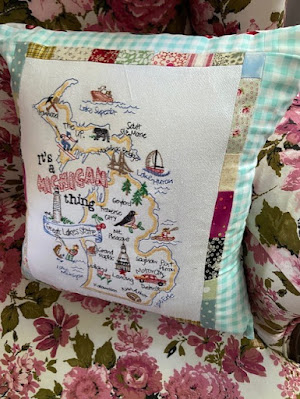 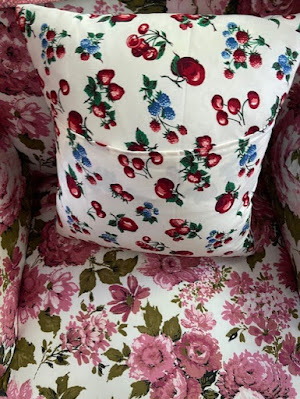 This one is ours where picking summer fruits is my summer.  A much better use of a cute dish towel. 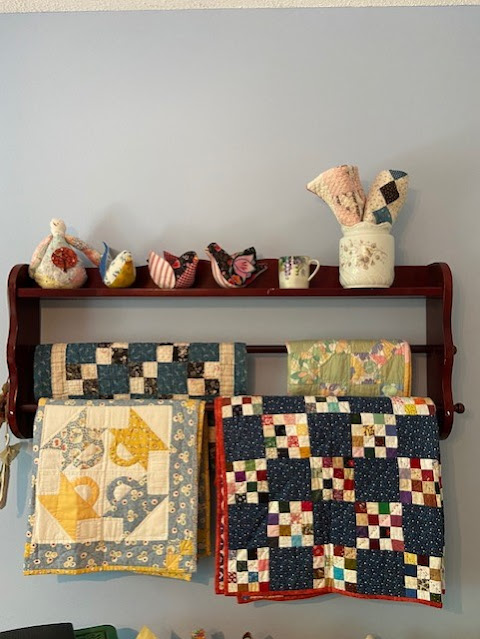 Friend Paul called and asked if I would like his mother's quilt rack.  I said yes!
Posted by Denice Barker at 6/13/2021 6 comments:

I wait for this day every year.  It's MY day.  I don't wait for Christmas with this kind of anticipation.  I don't.  This is strawberry day.  This was the first day of first picking and PH and I were out at the field by 8:30 a.m. During strawberry season I am out there every other day picking just enough berries for THE pie.  Today we picked 9.75 pounds of berries in about 20 minutes.  This particular variety was huge, extremely sweet and juicy and three filled your palm.  I don't make jam.  PH doesn't eat it and it would take me a whole year to go through one jar of jam so I don't bother.  Sometimes I freeze a few for making strawberry ice cream, sometimes for morning yogurt but not usually.  Mostly, it's all pie.

We were flattered this morning.  The girl who works the field station knows me from years past. As she said, "you're here every day" and told us that she keeps the recipe for this pie in her safe.  She said, "I have five things in my safe and your recipe is one of them." 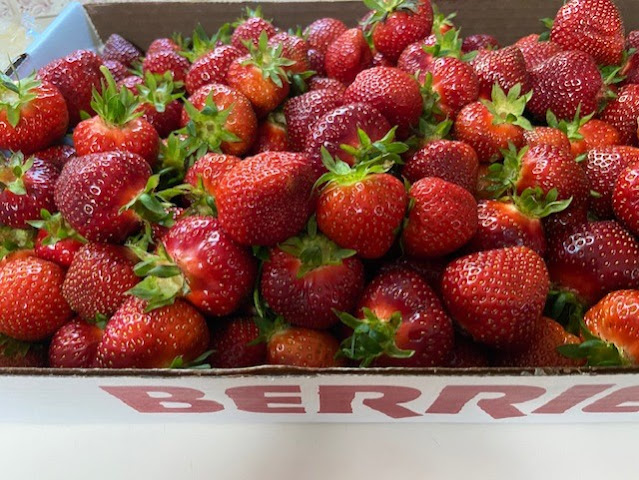 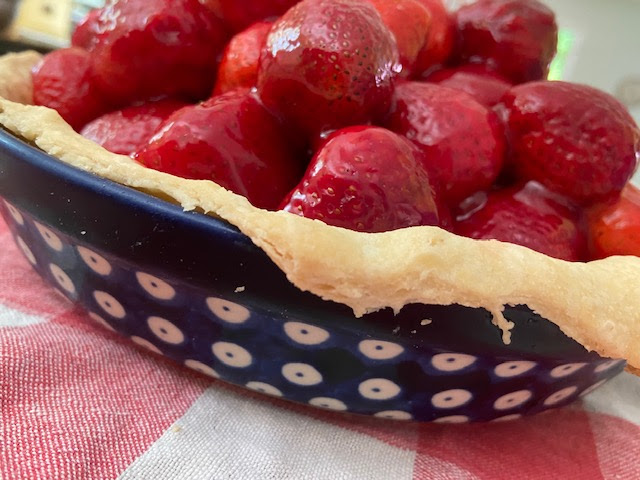 I made three of these pies with those 9.75 pounds.  Now, this pie, as you've heard me say many times, is the reason God made strawberries.  It can only be made with fresh picked Michigan berries.  Store berries are not even considered.  Not possible. Never. When a strawberry is cut the action should not make a sound and certainly not sound like you're cutting an apple.  A silent slice through ripe juiciness fresh off the plant, that's what it should sound like.  One pie went to PH's brother who is recuperating from a knee replacement and is still after three weeks in shock over the intensity of the thing.  One went to daughter and family down the street but I had to wait till daughter got home because by the time the adults got home Elizabeth would have had all the strawberries eaten out of it and presented the adults with an empty pie shell.  And the last one was for us. 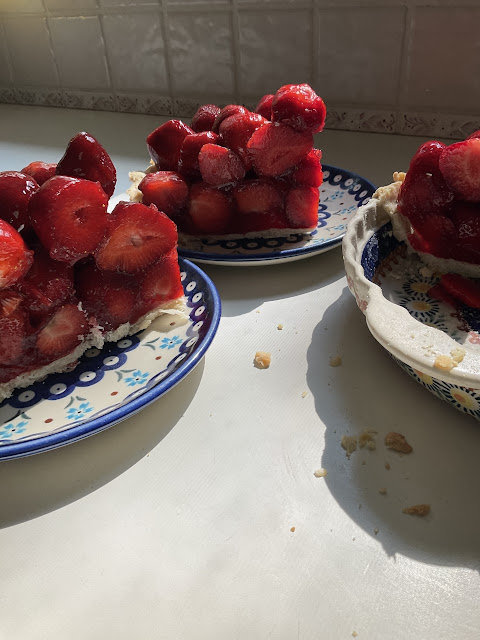 the Missing Treasures of Amy Ashton 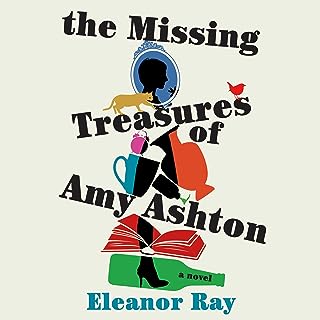 The Missing Treasures of Amy Ashton

Everybody always looks at me askance when I tell them I watch Hoarders on television. Really, I do watch it.  I can't look away.  I started watching when we were planning to move from a large house to another city and a smaller house.  I had to make way too many decisions, purge, pack up and we had a lot of stuff.  Books.  Hoo-boy, do we have books.  Quilt supplies and fabric, a whole wall, a long wall, of dishes, two living rooms, two kitchens, two dining rooms, too many decisions.  I happened on an episode of Hoarders on television, watched it and thought nothing I had to do could top that.  Watching put me in the mood to tackle the purging and packing and periodically, when I felt overwhelmed with the work, I'd sit down and watch another episode. But you can't watch without wondering how someone could end up that way.

Well, in The Missing Treasures of Amy Ashton, we get a glimpse of what can push a person in the direction of an unhealthy obsession with things. Amy looks normal from the outside but there is a reason she won't let you in her home.  Once she thought she would become an artist, and she is very good, but like it is with hoarders, something happened to the people in her past, people who were the most important things in her life, and she discovered you can lose people but things won't leave.

She has a preference for ceramic birds, pots, anything that sparks her artistic eye.  A coffee mug? Sure. More coffee mugs? Why not.  She talks to her ceramic birds, she covets her pots and fixes things that break. She can't let go.

One day a new family moves in next door and included in that family are two little boys.  There is nothing like a curious little boy to bring you out of yourself.  One day Amy discovers a piece of information about her past important people and she admits, finally, the need to know what happened.  Her sleuthing takes her back layer by layer and when she pulls back into the safety of her seclusion well, enter those little boys again.  One of whom shows hints of obsessions of his own, except his are bulldozers, not birds.

As with all hoarders, Amy has to make a decision, her things or people?  The little guy next door, some answers about her past losses and some broken mugs and pots help Amy to realize what's important to save and what isn't. And she learns that in letting go she is actually letting in.