Secret Wisdom of the Earth


The Secret Wisdom of the Earth by Christopher Scotton

Since I read the book Christy by Katherine Marshall as a teen I have been fascinated with the culture of the Appalachian mountain region.  I only have to read that this is the setting of a story and I’m on board with it.  It’s double good luck when the book is a good one.   This is a really good one.

After witnessing a horrific accident at their home in Indiana,  young teen Kevin and his mother travel back to a her home, in a coal town deep in Appalachia to heal, if that would be possible.  This town is no Mitford, the problems here are large.  The coal companies have taken to blowing the tops off the mountains to get to the coal easier and cheaper.  This is devastating to the environment and the town is torn between selling out to the coal company for the money or fighting.

Kevin’s grandfather is a wise man.  He is calm and wise in helping Kevin face his demons, and in letting Kevin’s mother, his daughter,  grieve.  He is also well respected in the town and a force behind the opposition to the coal company.

Kevin befriends Buzzy Fink and through and with Buzzy, Kevin gets to know and love the area he is living in, understands what the coal company is doing  and what it means and importantly, he starts to heal.  Until horror again visits his life and he must take the step to becoming a man.  Quickly.

The story is told by adult Kevin looking back on this summer and understanding what time and distance can show us.   This was really, really, really a good read. I recommend it highly.  Highly.
Posted by Denice Barker at 11/30/2014 2 comments:

Labels: Secret Wisdom of the Earth

Our Thanksgiving day was once again wonderful.  Our children and grands were all together, daughter did the cooking, dads did the dishes, kids played themselves out.  A person couldn't ask for more.  I hope yours was as nice as ours. 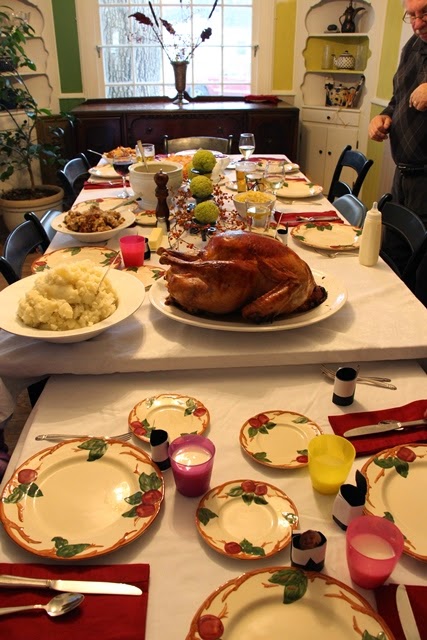 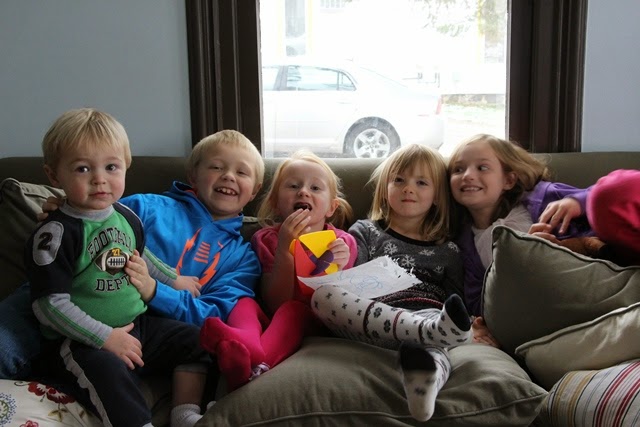 It's getting harder and harder to get these guys to focus but it's ok.  They have so much fun together they just don't sit still for long.  Charlie and Elizabeth pair up,  Ceci and Adelaide are a pair to draw to and Michael just runs along with them all.  Everyone is healthy and happy to be together.

The amazing thing is that the day before Thanksgiving I received my package from my Secret Santa Maria in Queensland, Australia  and Peg received hers from me in New South Wales, Australia!  Imagine Santa timing that! 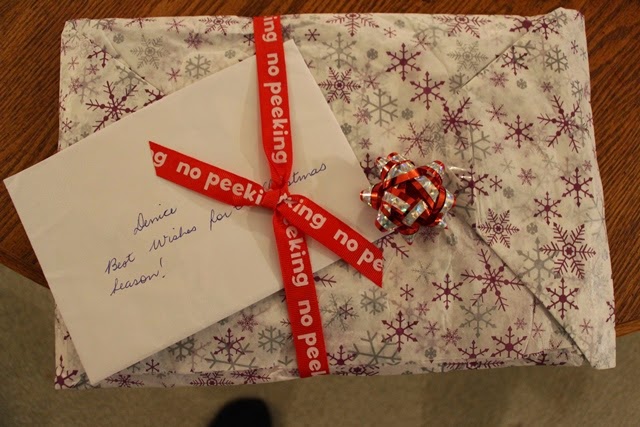 Here's the package I can't open till Christmas. 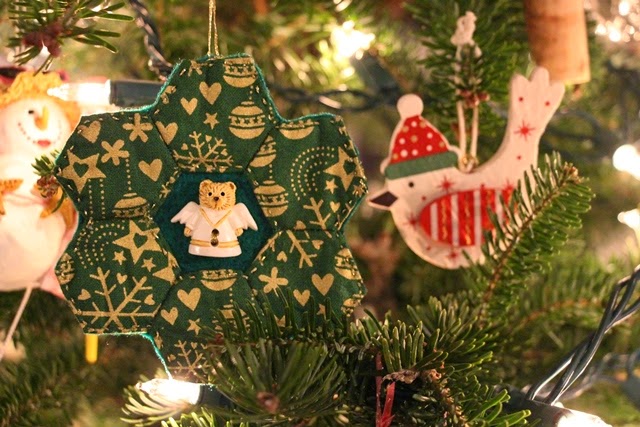 But I could open my ornaments.  A hexie with a sweet little angel bear button in the middle and a bird all decked out for the season.  Maria said she stalked my blog and knew I loved birds but I don't think she knew that I've been trying to get up the courage to tackle hexies and just haven't yet.  She scored on both counts! 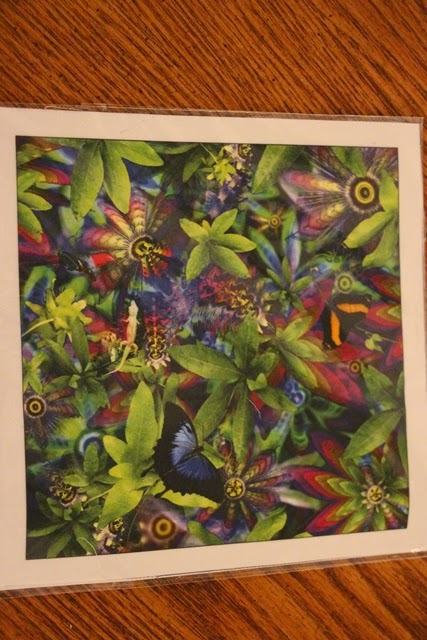 This is amazing in person.  It's a 6 inch patch of fabric showing the colors and passion flowers and bright butterflies found in the rainforest tropics of Queensland.

Thank you Maria!  I am excited you are my Secret Santa and can't wait to open my gift!  I will now be able to circle your town on my map.

I keep a nice map of Australia and each Secret Santa's town and the bloggers I follow is circled so I can see where everyone lives. This year I add Maria and Peg. 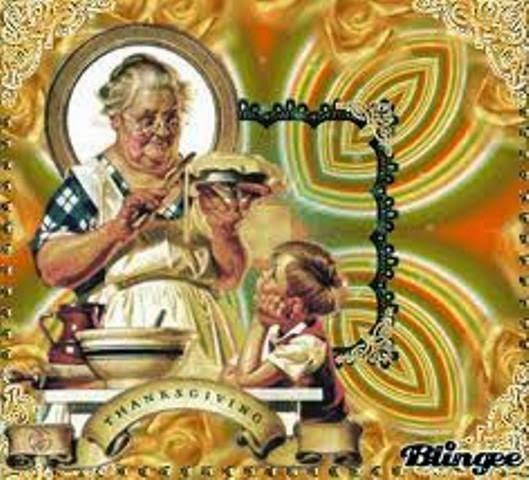 A drizzle of sunshine

The weather outside is frightful...so the song goes. And it really is.  It's been freezing, and depending on where you live we've had anywhere from 4-14 inches of snow and the wind is howling. It's all about two months too soon.

I've been packing and rearranging and loading and hauling because the house stager said to. But today my sit down job was to coat another 135 peppermint patties with chocolate. When I finished I had lots of chocolate left. As I was pouring it into another container I remembered the raspberries in the fridge.

I'm not such a fan of chocolate on my fruit but my daughter said, "WHAT?? Chocolate and raspberries go together like Parmesan and Chardonnay!" 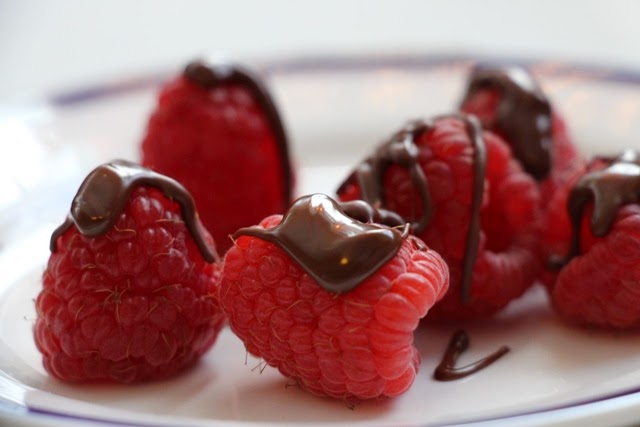 Our national holiday of Thanksgiving is coming up in about 10 days and while it's hard to even conceive of Thanksgiving without a turkey,  it's even harder to think of the day without pie. Turkey and pie.  The other side dishes can vary by family tradition, but turkey and pie are the bookends of the meal. Pumpkin pie is traditionally there, but since not everyone likes it (that would be me,)  there is usually a fruit pie offered as a pinch hitter.

Last summer Friends Marge and Jenn wanted to learn how to make pie crust.  They called me, brought apples, husbands and toddler AJ and came down for the day to learn from (their quotes) "the master."  Jeez O Peets, as Marge would say.  I'm not a master and I don't make pie crust from a recipe.  I just do it.  Believe me, the day was much harder for me demonstrating than for them taking notes. 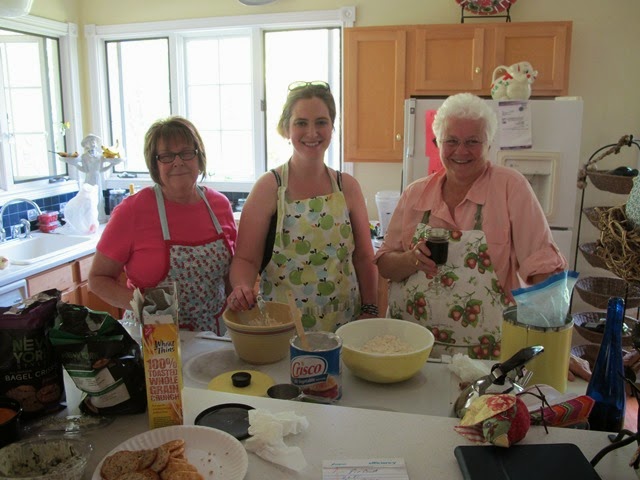 But we drank some wine, ate some goodies and they each went home with a pie. 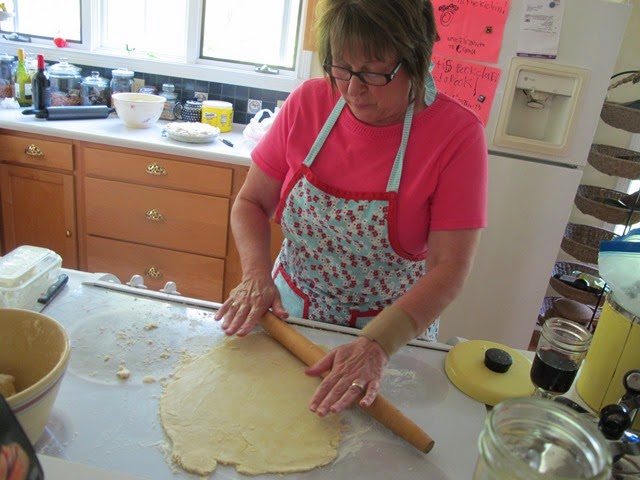 Now we're down to the wire, the big day approaches.  It's a big deal, Thanksgiving Day.  The food is the star of the show. No gift shopping, no wrapping, no lights and carols.  Just the food and a table with family and friends all around to eat it.  Marge was feeling the pressure.  Since her mom has become too elderly to do the pies anymore she took on the task for the family.  In order to not mess it up, she did a trial run with pumpkin and apple. 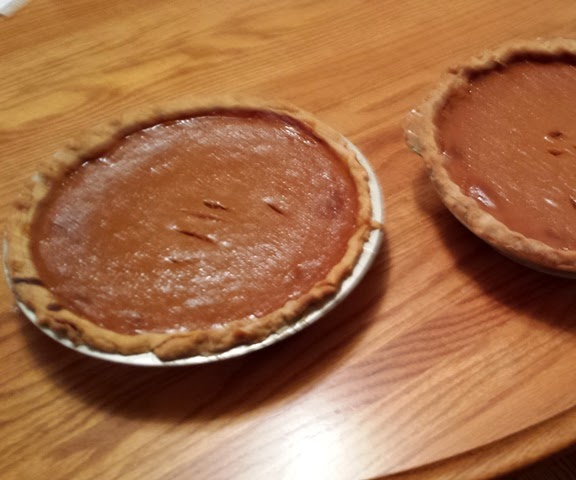 These pictures are from her phone so this one is a little blurry.  But look at that golden crust! The firm custard filling! 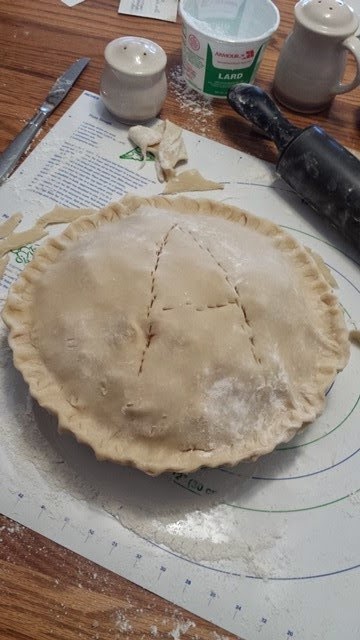 She also made apple pie and then took them over to her sons' houses to taste test.  And after the votes were counted Marge's pies were declared "better than Grandma's!"  Yay Marge! 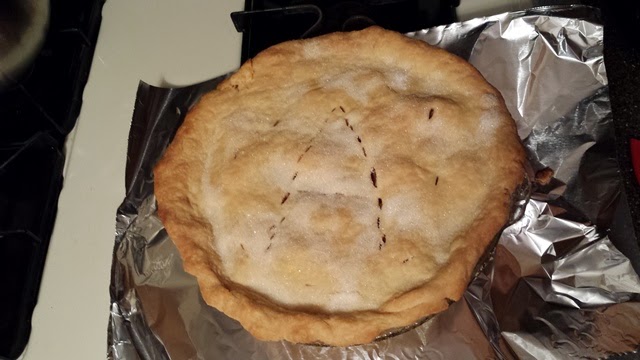 
Well.  I can say I never read anything like this book.  But I’m not much of one for fantasy or Sci-Fi.  Not that this is Sci-Fi, but you must, absolutely,  suspend all preconceptions about Rudolph the Red Nosed Reindeer, Santa, the elves, Mrs. Claus, the North Pole and all,  ALL other Christmas traditions.  And if you have read this far be warned and be aware, this is NOT, I repeat, NOT a children’s book. NOT.

Let me see if I get this straight.  Mrs. Claus has an iMac and Santa has a stun gun. He sends Christmas cards to the Pope, he is color blind.  The elves are unionized. Santa goes into lockdown the day after Thanksgiving until Flight Night.  Rudolph’s nose glows because he’s radioactive. And finally, for one and all who just don’t believe Santa can get the job done in one night, it’s explained in here.  Considering the rest of what happens in this story, I believe the explanation!

Here’s what happens.  Really.  It’s almost Christmas Eve and Santa finds a letter that has been overlooked from a little girl asking for her daddy for Christmas.  Daddy recently died.  Santa can’t deny a Christmas wish.  So, well, it’s obvious, isn’t it?  Santa and an elf and all the reindeer hack into Heaven’s list of new “members” and they invade purgatory looking for David Anderson.  They find him, battle ensues with the angels guarding Heaven’s gates and Santa delivers daddy.  It’s a miracle.  But miracles come with a price.  Santa upset the balance.

Santa gets sick.  Really, really sick.  It’s the work of Satan and now the Reindeer and elf are off to, you guessed it,  they find they have to travel through Dante’s seven levels.

I’ve suspended all belief by now.  By now I’m finding nuggets in this story to keep me going.  You see, Satan stole Christmas spirit and without it, we’re doomed to nothingness for the long, cold winters. We are shown how our small little minds have changed what Christmas is supposed to have been.  Not Black Friday, to be sure. Not limited attention spans because all the kids want now are electronics.

It’s about having something to believe in. We “have to believe in miracles that are never going to happen.” We have to ”believe in the possibility.”  I have to say, as outrageously imaginative as this book was, we were smacked in the face with the reality of things as they are.  And while I smiled and sometimes laughed and shook my head at the imagination involved in writing this story, I did get the message.  He said it so well.  “Angels can’t just come down and fix. You can’t depend on them if you can’t depend on yourself.”   Keep the spirit alive.
Posted by Denice Barker at 11/13/2014 1 comment: