The Magdalene Scrolls by Barbara Wood

This is Barbara Wood’s debut novel, published in 1978.  This is also the first of Barbara Woods’ books that I’ve read.  I chose it for preview because of the story line.  I do like those treasure hunt stories, the ones that promise a cataclysmic surprise.  Sometimes they deliver and sometimes they don’t.
The story behind the Magdalene scrolls is a wondrous find that is sent to paleolinguist Professor Ben Messer.  It’s very exciting stuff to be sent something dated to just 30 years after the death of Christ and Ben immerses himself in transcribing the scrolls.  They turn out to be a last soul wrenching I-have-to-get-this-off-my-chest-before-I-die confession of David ben Jonah.
David and Ben’s lives become more and more intertwined as the translating progresses.  Ben imagines himself living David’s life.  David struggles with the same questions of faith as Ben.  David witnesses the Roman persecution of the Jews, half of Ben’s family were victims of the Holocaust.  David struggles with what it means to be a good, pious Jew while Ben disavowed the faith after moving across country to escape the reminders of his home.
We are teased through the entire story of a sin so great committed by David that he will never be forgiven for it, and David’s words from 2,000 years ago slowly seep into Ben’s consciousness until Ben no longer can control either David or himself.  I stayed with the story because David’s story was interesting.  Ben’s wasn’t so much, there was too much watching him descend without knowing why.
Posted by Denice Barker at 11/25/2016 No comments:

In the United States, Thanksgiving Day is about tradition.  Some people don't mind shaking things up each year and some people carve their expectations for the day in stone.   As our family grew and evolved we managed to hang on to Thanksgiving Day as we have known it.  And for that we are thankful. Part of the expectation is the traditional foods and we hang onto those with both hands.  There's the turkey, stuffing, mashed potatoes, because Thanksgiving wouldn't be right without them.  But in PH's family there was always a big bowl of noodles on the table, too.  Homemade noodles. Noodles kneaded and rolled and cut with a knife.  Dried, and then simmered in homemade chicken stock.  And shame on me, I never learned how to make them.  But my daughter did. 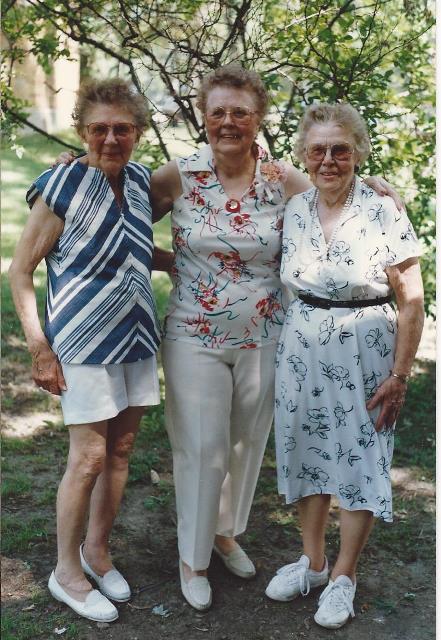 From the left:  Lucinda, PH's mother, Aunt Celeste in the middle and Aunt Marcella.  Don't you just love those names?  These three ruled their own roost and everyone else's, too.  We called them The Big Three and they kept the family in line and together.  They were so synced with each other they independently bought the same dresses, fixed the same things for dinner and picked up the phone to call and found each other on the other line.  But each of them made a different noodle.  Same recipe.  Lucinda's noodles were thick, like a kluske, and yellow and cooked in home made chicken stock.  Aunt Celeste's were thick cut, white and cooked with chicken stock.  Aunt Marcella's were very thin, white and cooked in beef stock.  You could walk up to a buffet table and know exactly whose you were looking at and you better walk away from that buffet table with a little of each on your plate!

Our daughter knew the value of maintaining the food traditions and learned how to make grandma's noodles but the first time she tried it on her own she couldn't figure out why hers weren't yellow like grandma's.  She called PH's brother to ask and he said she put a little drop of yellow food coloring in hers.  Voila!   She now officially has the job of making noodles for the holidays and she is passing it on to the girls. 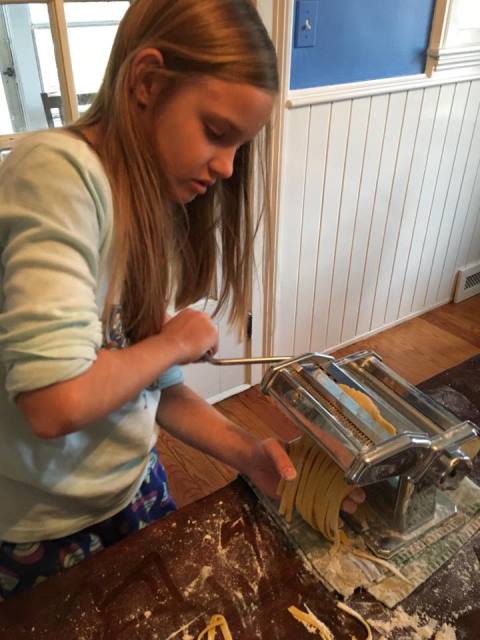 In preparation for this Thursday, yesterday was noodle making day at their house.  On the way home from school today I told the girls I was impressed with these pictures their momma took and that it looked like they were doing it all themselves.  Elizabeth said, "Pretty much" but this was the first year she felt she had the strength to really crank the noodle maker and get it to work. 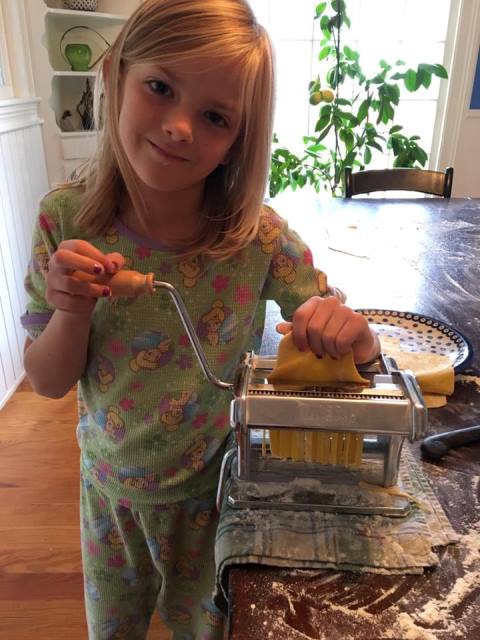 It was harder for Adelaide, she's younger and doesn't yet have the muscle power, but she did her part.  No more rolling them out by hand and cutting them with a knife.  Sometimes you make a concession. 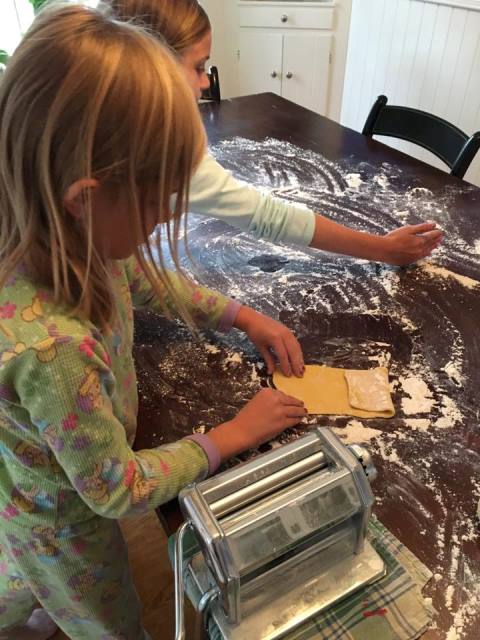 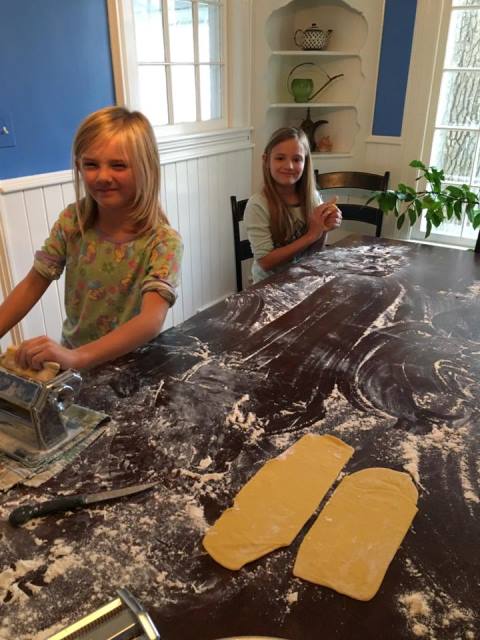 Adelaide said she had a harder time controlling the flour. 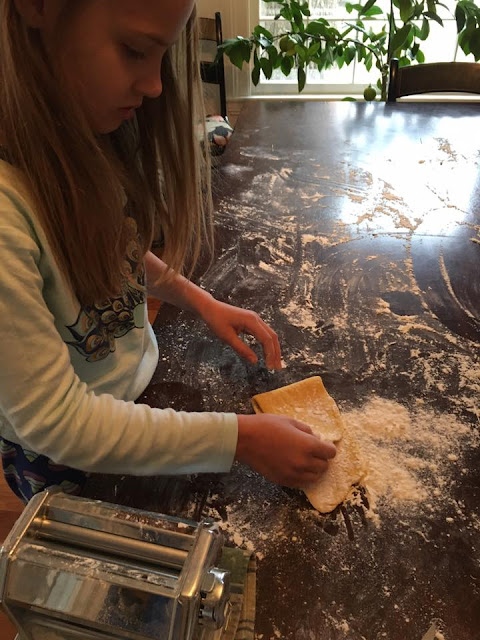 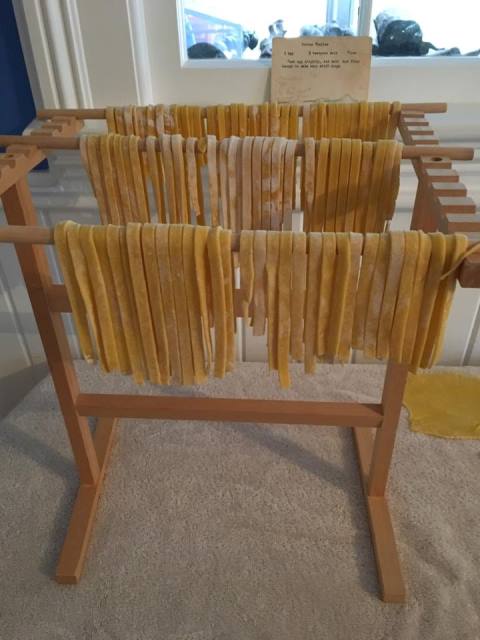 Now the wait begins.  The noodles need time to dry but this is the part the girls like best.  Today they will be dried enough to eat them raw.  Sometimes momma has to hide them so there are some left to cook.  Sometimes she makes a bigger recipe so they can nibble as much as they want. That doesn't matter, what matters is the tradition continues.
Posted by Denice Barker at 11/22/2016 2 comments: 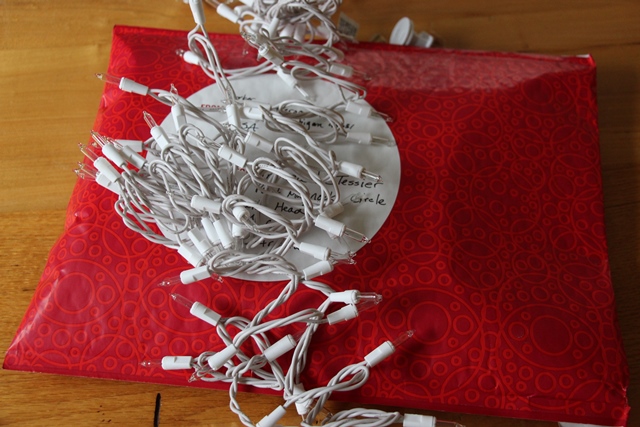 Santa stopped by the other day because all the way from the North Pole he could smell the cookies I was baking.  I gave him a couple, a few Peppermint Patties and this package.  I asked him to be careful with it and speedy delivery.
Posted by Denice Barker at 11/21/2016 2 comments:

The Sun is Also a Star


The Sun is also a Star by Nicola Yoon
Natasha is a scientist at heart and in her brain.  She believes in what she can see and prove scientifically.  Definitely not love.  Certainly not fate.  And if you told her she would fall in love with a Korean poet in one day, the day she and her family are being deported to Jamaica, she would argue you to the sidewalk.
Daniel is a poet at heart and in his brain.  Not a doctor like his parents want him to be. Not headed for second choice school Yale.  Daniel does believe the planets can and do align to ignite a single moment. He does believe in the unexplainable.  And he does believe when he saw Natasha on a New York City street, that she was for him.
Daniel sets out to prove to Natasha that you certainly can fall in love, real love, in one day.  He is out to prove it while Natasha has only that one day. The problem is, Daniel doesn’t know that at midnight Natasha will leave.
If you don’t believe a person can fall in love that fast then don’t read this book.  But if you do believe it, or even think you might believe it, this is a fantastically uplifting story.
Posted by Denice Barker at 11/20/2016 No comments: