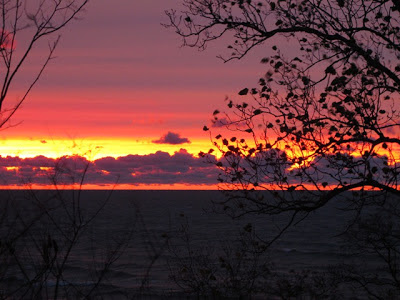 This was the sunset last night as the back end clouds from Hurricane Sandy swirled in our direction, about 800 miles from the East Coast.
Posted by Denice Barker at 10/30/2012 1 comment: 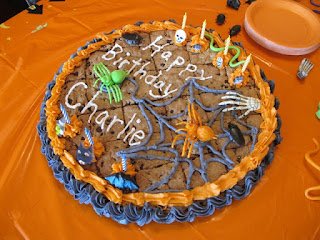 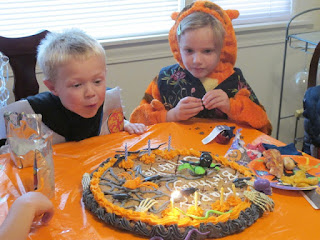 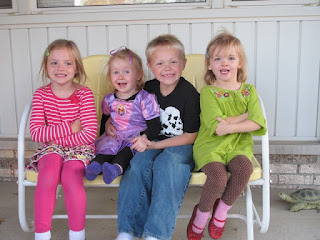 OK, it's a lousy picture, but I had to paste it from the website so you can see at least something.  I had the opportunity to read an advance of this book and wanted to tell you about it...a little.  Friend Laurie, don't be critical of this review....remember my qualifier....if I finished it that meant I liked it.
My preference is historical fiction and I scored with this one.  This is the story of Mary Mallon, or better known to us as Typhoid Mary.  Mary was a carrier, she didn't actually have or ever have the disease but she carried and spread it.  To make it worse, she was a cook.  And a darned good one, too.  She loved to cook and served some of  the 'best' families on the East Coast. She tasted and put the spoon back into the pot. She wasn't the most meticulously clean person after her bathroom breaks.  She never made the connection to the deaths that seemed to always be happening when she was around because not everyone she cooked for got sick or died if they did get sick.   Times were different, people didn't understand germ spreading, hand washing, and carrying diseases.  But this was an area of medicine that was growing fast and Mary did not escape the attention of the medical community.  Connections were made. She was found, arrested and sent to an island hospital where tuberculosis patients were quarantined from the rest of New York City.  After three years she was allowed to leave.  But only if she promised to never again do the one thing she loved to do - cook.  I'm not going to say too much more.  Just know if this had happened to me, I would have probably responded to the authorities the same way she did.

Watch for this to be published after the first of the year.  I recommend it highly, even to Friend Laurie.
I have been quilting, I just can't show it to you yet.  Shhh....it's a secret...but it IS finished! HoHoHo!
Posted by Denice Barker at 10/22/2012 No comments:

I just got home from a four day retreat.  A quilt retreat.  But a retreat none the less.  Our retreat center truly IS a retreat center, we just happen to use it for a quilt weekend.  Our group of 12 has gotten together for over ten years in one way or another, the core group of about 6 has stayed the same.
At breakfast Friday we were told about the new addition to the experience.  A labyrinth.  This was built this past summer with the help of 18 people for two days during 100 degree heat.  Friday morning was frosty and beautiful so Joyce, Val and I investigated. 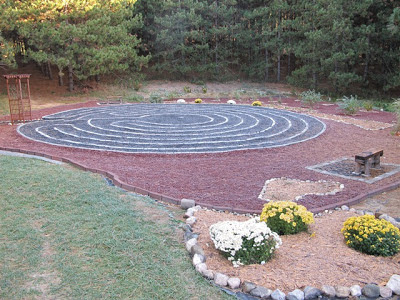 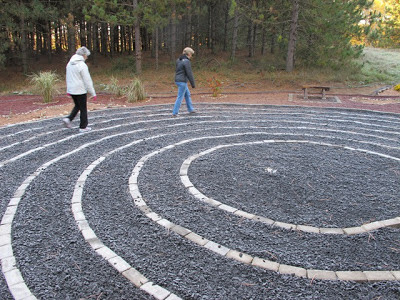 When you walk a labyrinth you have to LOOK at the path to stay ON the path or you go OFF the path and this centers you.  I felt like a monk. 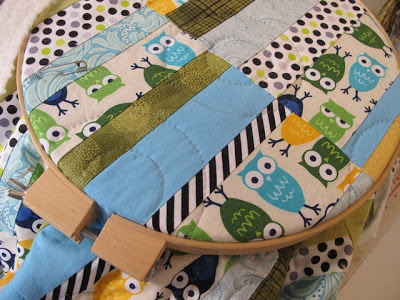 Marilyn was quilting her soon to be new grandson's baby quilt. 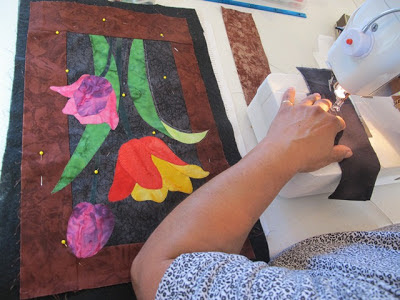 Inez made this for her sister who is going to come for a visit from Peru. 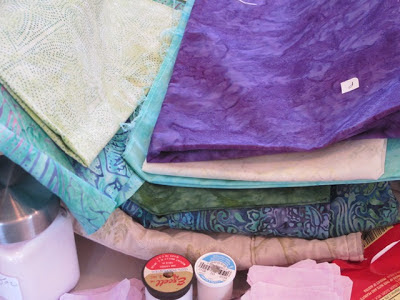 This is Joyce's palate.  Whenever I see these colors I think of her.  I caused quite an uproar when I admitted the one color I really do not care for is teal.  It happens to be Joyce's favorite.  We teased about it for the rest of the weekend. 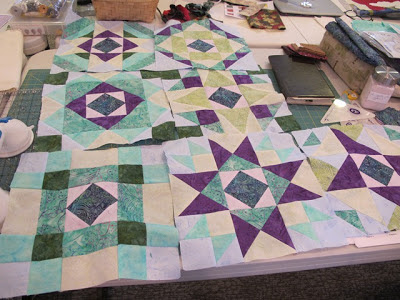 And nose to the needle for the weekend she cut and finished 8 of the 12 blocks she needs for her project. 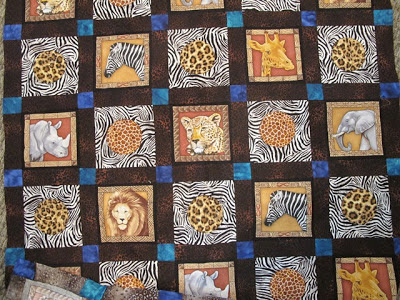 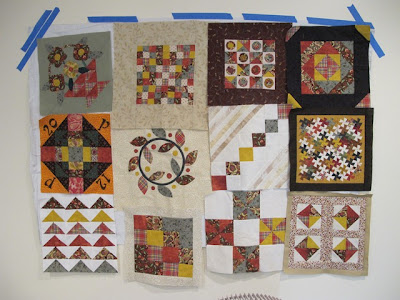 Last fall I gave each person a stack of 3 inch fabric cuts.  Three each of six different colors.  The instructions were to use them in a 12.5 inch square.  We played a game of LCR  (Left Right Center) and winner took all.  Now SHE must return next year with a completed top. 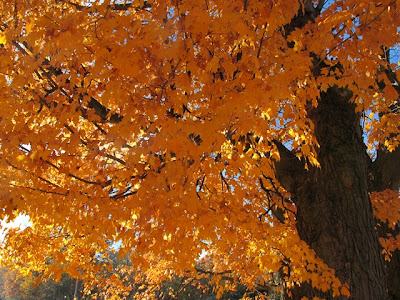 We are cared for and coddled and fed and spoiled by the inn keepers.  There is nothing, absolutely nothing I needed more than to be at this place this weekend.
Posted by Denice Barker at 10/14/2012 2 comments: 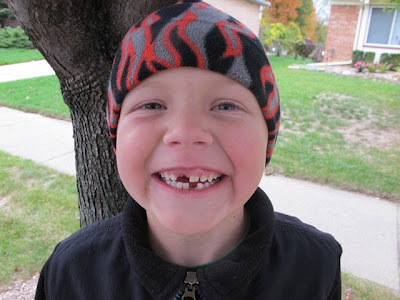 We travelled to see Charlie in one of his soccer games yesterday.  He had a surprise for us!  He lost both of his loose teeth.  The bottom came out while he was eating.  The top was much more traumatic. 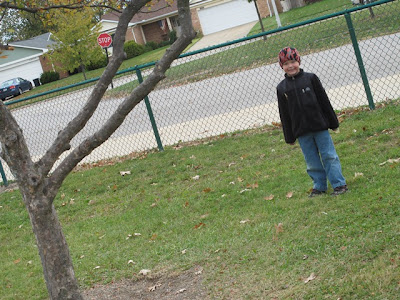 He and a friend were running at recess and clonked heads.  Charlie went one way and the tooth went another.  This is the exact spot on the school playground where it happened.  In his house, the Tooth Fairy leaves $2 for the first tooth and $1 for each tooth thereafter but this one had some trauma pay attached and paid $5.  He said to his dad, "Dad! I got a dollar but it has a '5' on it!" 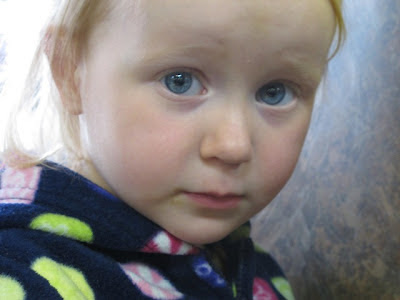 I just can't stop looking at these blue eyes! 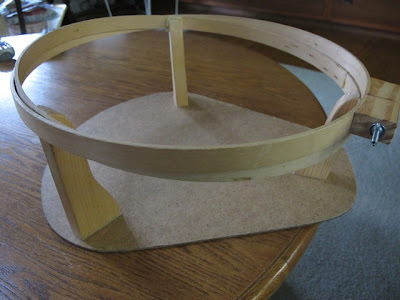 Friend Marg asked if I use a hoop when I quilt because I quilt by hand.  Yes.  I know these have been advertised in backs of magazines but I have a dear neighbor who made this for me.  It completely transformed my quilting.  The base sits on my lap (or is propped sideways) and I can feel underneath with one hand while guiding the needle with the other and don't have to worry about holding anything. I love this thing. 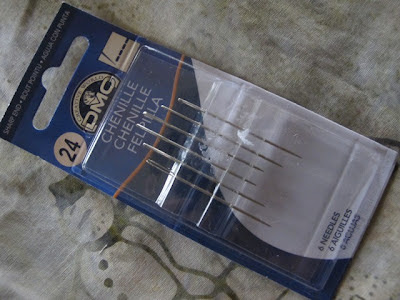 Mystery solved!  While email conversing with Marg, I figured out what the orphan needle of another post was.  It's a size 24 Chenille.  Industrial looking.  No gold tip.  I found the 9 embroidery was too thin to go through the rigors of two layers and batting.  They kept snapping in half mid-stitch.  This one has heft, the eye is just right and while it eventually does bend, it's sturdy. 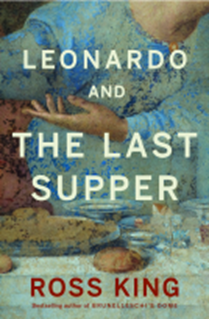 I also just finished two books.  This one was fascinating.  It was an advance copy, it's coming out soon.  I learned so much!  Who doesn't know the painting by Leonardo DaVinci?  This author took me through every possible scenario from the politics of the time, to Leonardo's being hired to do this painting and why, given his horrible reputation for an even worse work ethic.  I learned what he wore, ate, who his friends were, how he painted, mixed his paints, experimented and anguished for the chance to be hired to make military machines. We learn in great detail about this painting, who the people were who were models, who the guests were at this dinner and what was portrayed as served on this table, and why. We are given the historical perspective in great, fascinating detail.  Things I was fascinated to learn about.  I didn't want to put it down and when I did, couldn't wait to pick it back up again. 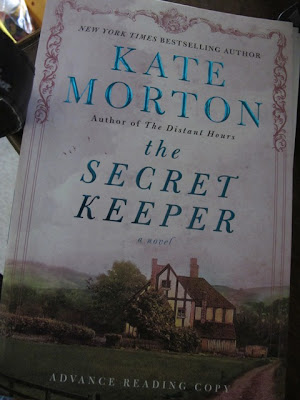 I've read all of Kate Morton's books and enjoyed them all very much.  I was excited to get the chance to have an advance copy of her new book and I was not disappointed.  Rather I stayed up longer than I should have too many evenings to read it.
This one concerns secrets.  Secrets have heavy weights attached to them and the ones that Dorothy Nicolson carries are no different.
Dorothy is 90, her children have gathered for what is her last birthday.  Daughter Laurel remembers an event many years before that she wants to understand before her mother passes away.   Laurel is sixteen when she witnesses a crime her mother commits. She is old enough to remember this crime and carries it with her for 50 years. Dorothy wants to talk but it's very hard when you have to gather the strength for every breath.
Using photographs and the hints her mother tells her, Laurel discovers more than she bargained for.  She uncovers Dorothy's life during World War II, who her friends were and the relationships she had and through alternating timelines we learn first.  Now that her mother is dying she knows she has just this one chance to find out why her mother did what she did.
This sounds like I'm keeping secrets from you and not making this very interesting. I'm not trying to sound like a blurb on the back of a book, I'm just trying not to give anything away!  If you are familiar with Kate Morton's books, this one won't disappoint you.
Posted by Denice Barker at 10/07/2012 No comments: