That's the email chant that starts a  couple of weeks before "Retreat  Retreat  Retreat!"  It gets us excited like any cheer should, it reminds us to get the projects prepped and  bags packed and wine bought. 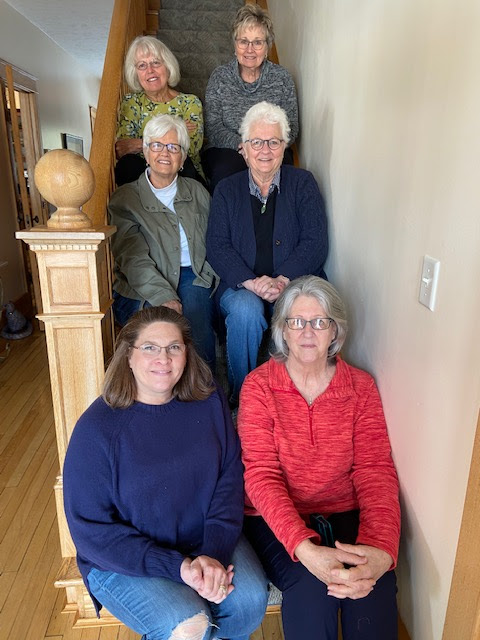 Our group is shrinking in size.  This time we missed Friend Marilyn but even though there are fewer of us, it gives us a chance to really visit and catch up 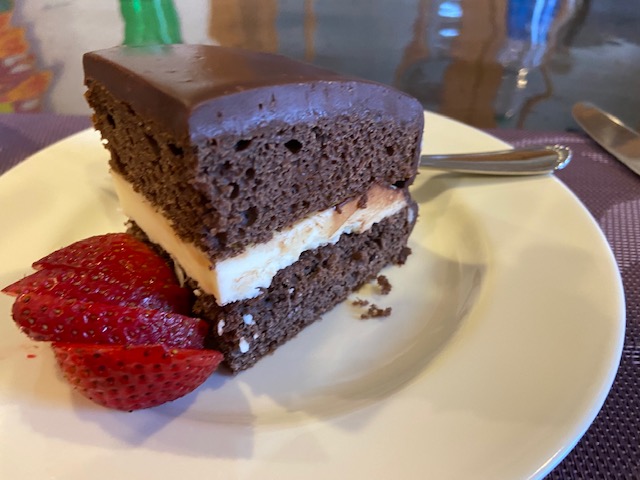 Arrival day was also Barb's birthday and our chef Sharon made a favorite of our group, the chocolate cake - just look at the thickness of that chocolate ganache frosting. It's swoon worthy. 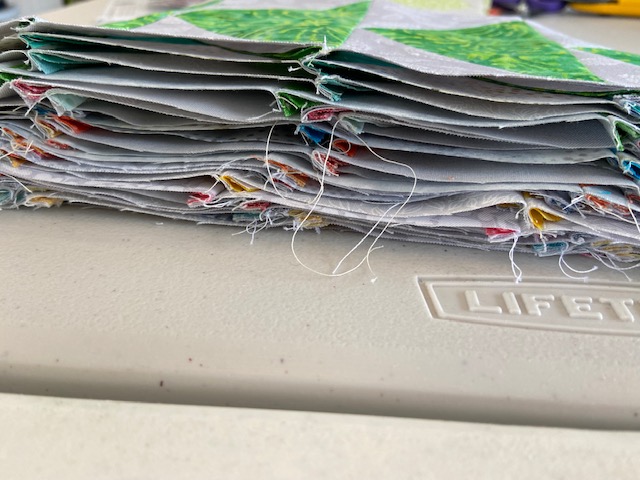 Sally is a nose to the needle  prolific quilter.  She loves teeny, tiny piecing so these geese were way bigger than she usually works with. 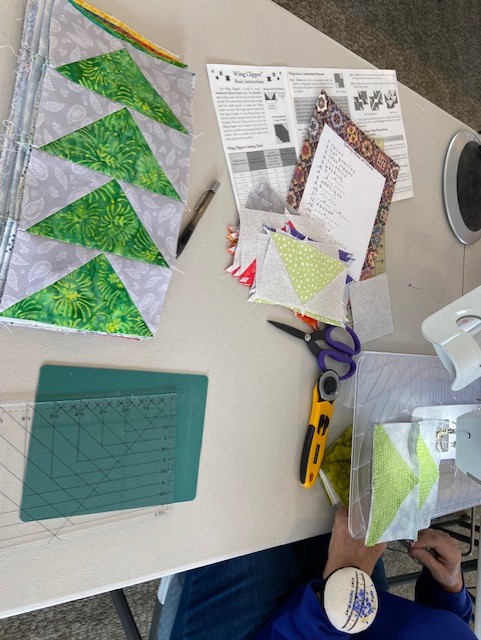 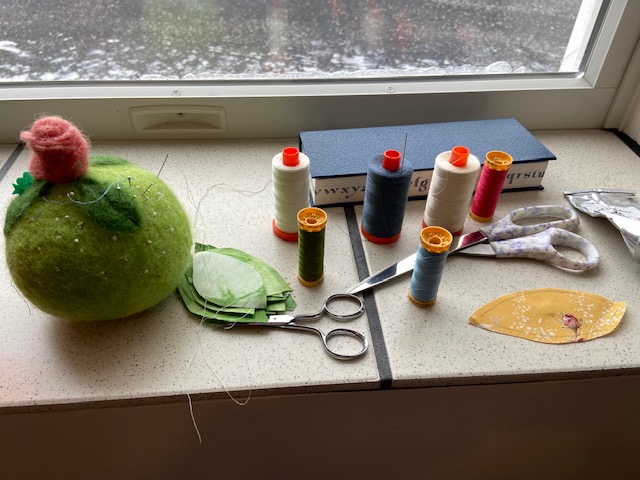 My corner.  I need good light to applique and hand quilt so I am positioned between two windows and the window shelf is my  table. 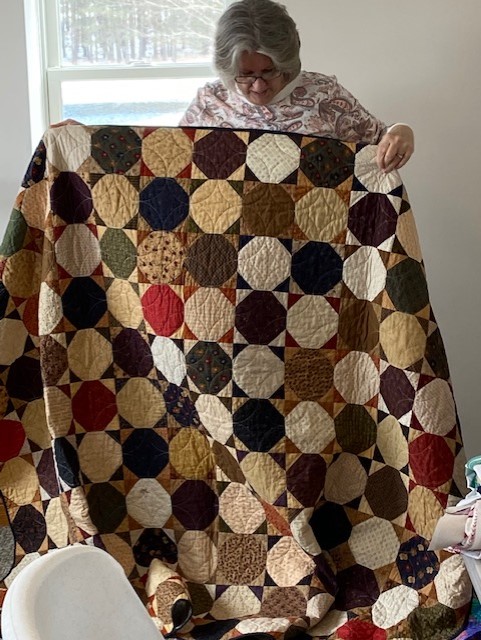 Show and tell:  This is Jan's 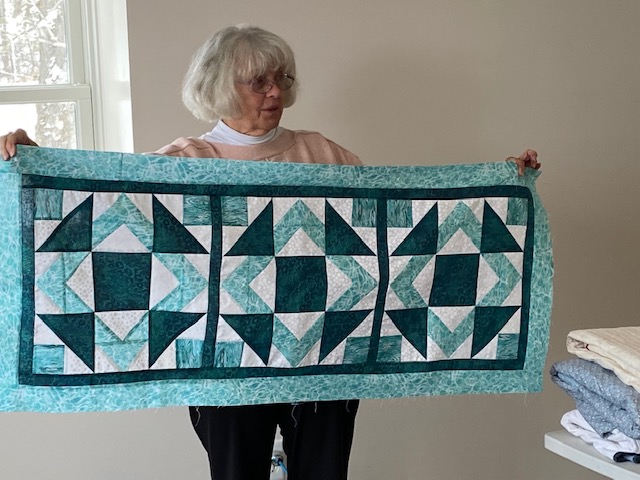 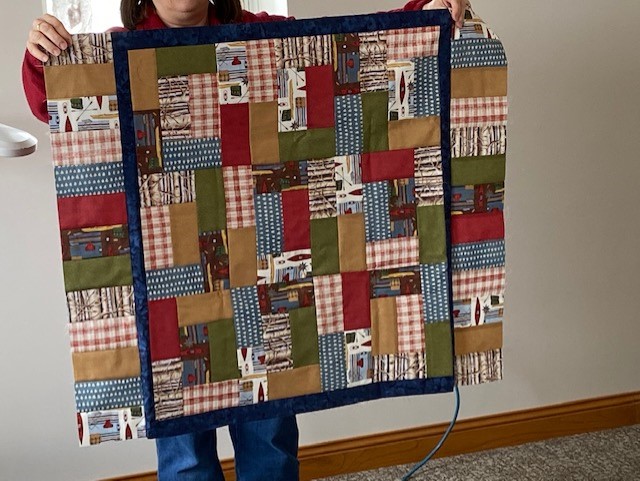 and Lisa's work in progress 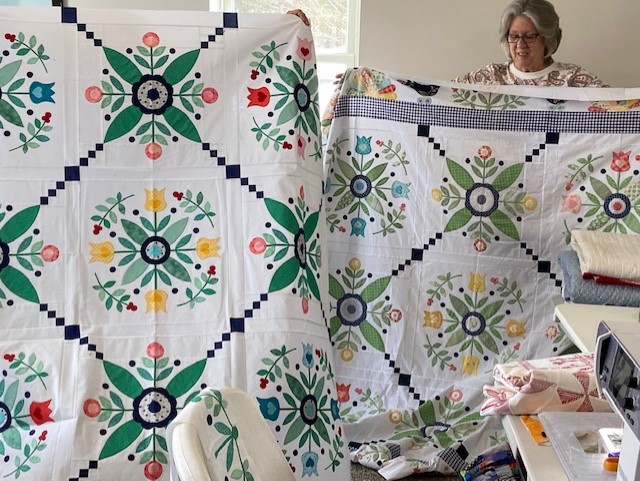 Sally and Jan have been working on making the same quilt, different fabrics. 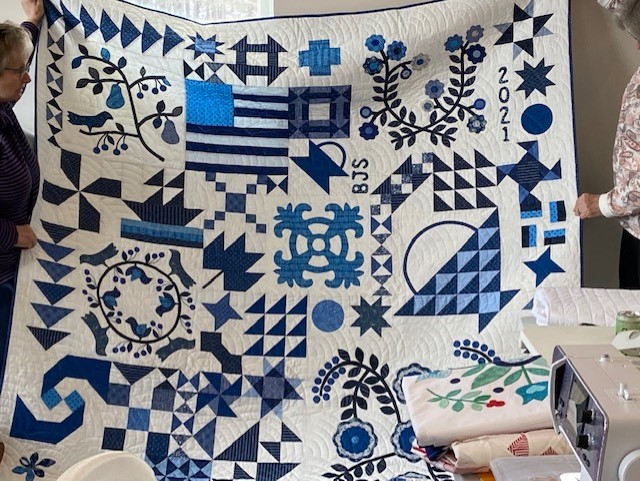 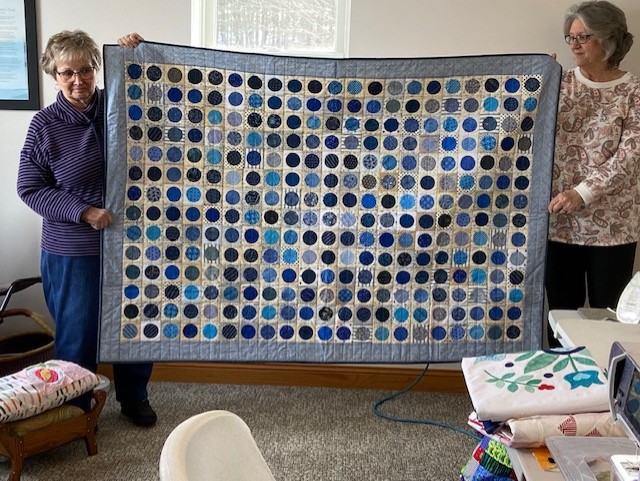 and circles in blue 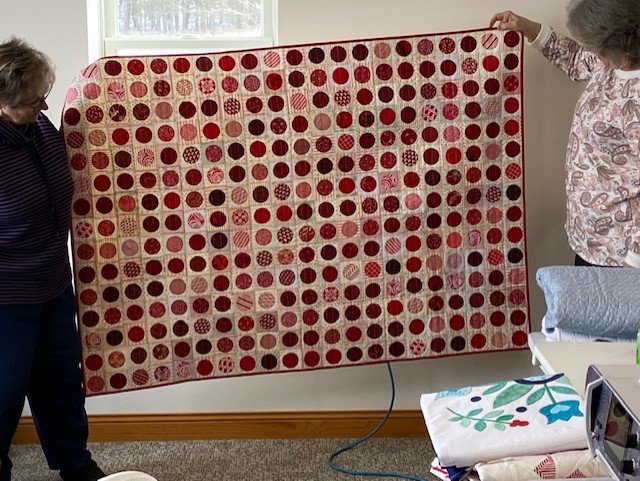 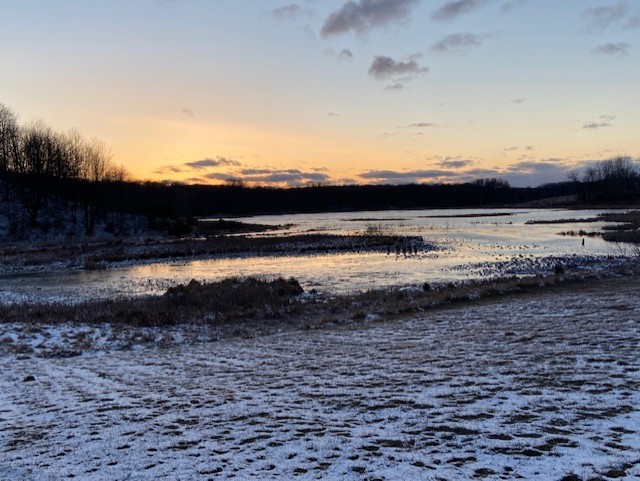 After three days of stitching, visiting, being with the innkeepers and NOT able to  go for a walk in the woods because it was ridiculously cold (last Sunday I was sitting on my porch reading in the sun and this Sunday we were F R E E Z I N G and being careful not to slip on the icy snow) we say goodbye once again and count the days till next time.

There are many variables to Cruschiki Day  (Polish Bow Ties.)

I have to be in the mood

I need to have had a good night's sleep

The sun has to be shining

It helps if the sky is blue

It's iffy about having the girls here to help.  I want them to learn and daughter wants them to learn but when they are here I can't cut the recipe in half because they eat a large proportion of the dough raw and Elizabeth is standing nearby waiting to devour the finished product.  If they are NOT here and I don't tell them I made them then the half batch can be enough for Easter.

Today it was spur of the moment, all of the variables were in place, so I proceeded without them.  Besides, it's not like when they were little and needed to do something on a Sunday afternoon.  They are quite the busy girls now. 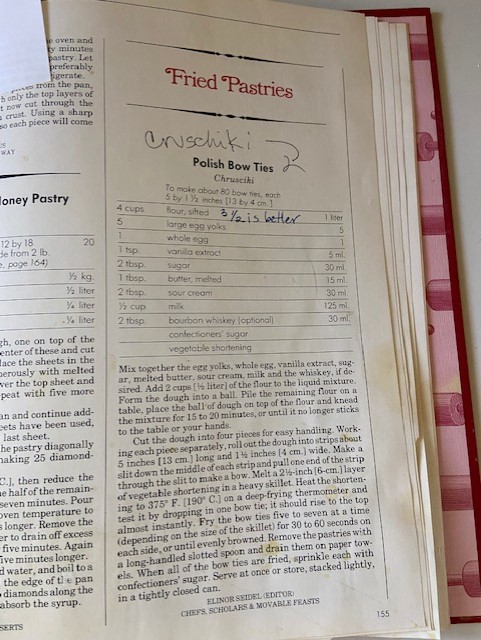 After my grandma died it was many years before I found a recipe for Cruschiki.  This was decades before Pinterest.  Word of advice, if there is something you make that the family loves or is traditionally served on a holiday, WRITE IT DOWN and pass it to someone.  Many a phone call has been made between me and my brother with the question "did you ever get the recipe for..."  and now I seem to be the holder of some recipes from PH's mother and aunts, and get an occasional query.  Just the other day in fact PH got a text, "Do you have Marcella's cole slaw recipe?" 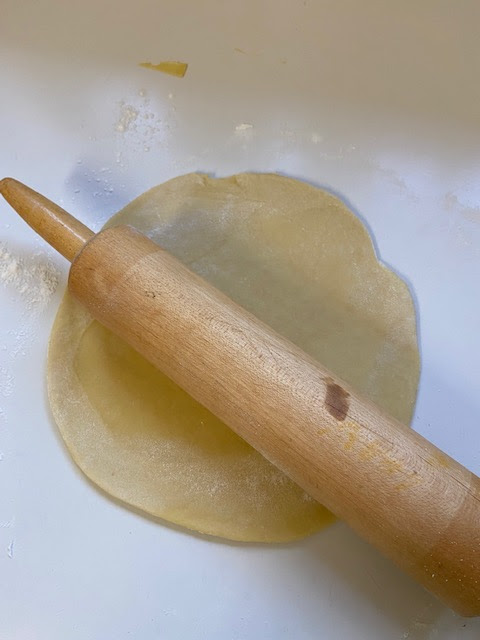 When I was a kid I would go to my grandma's house on Good Friday when she started cooking for Sunday. I remember watching her.  I learned a lot by watching both her and my mom while they cooked.  Busia would roll the dough out and say it has to be paper thin, you don't want an al dente bite when you eat these. 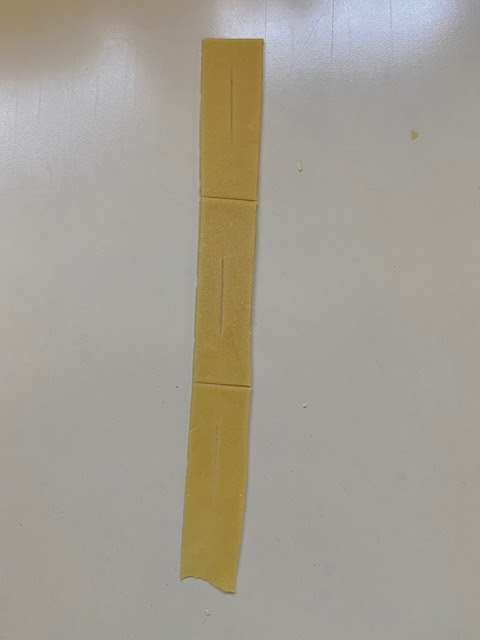 I roll them, slice them with a pizza cutter and when I turn them into the bow tie I stretch them even thinner. 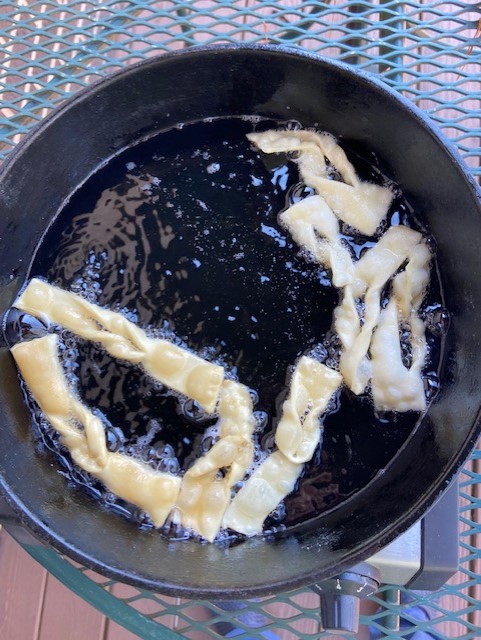 They are supposed to bubble on the ends and rise to the surface immediately. 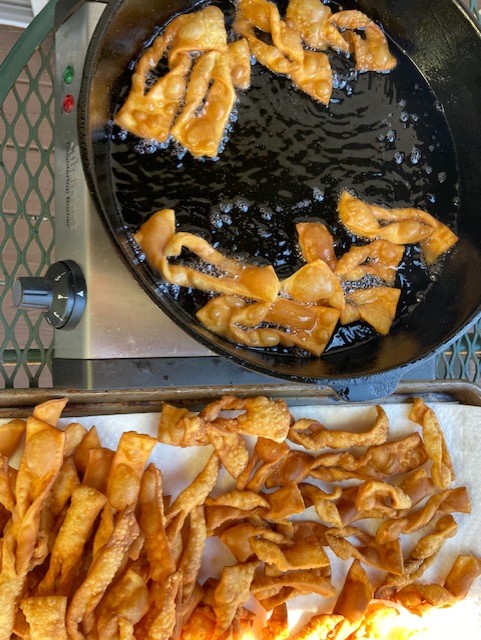 After they're dusted with powdered sugar and you eat them, they are supposed to fall apart at that first bite and the powdered sugar should be all over your shirt.  If they're done right.

Last spring Lori over at Humble Quilts put out a challenge to remake an old orphan block. I was  a part of her mini quilt exchange last winter and thought this would be a breeze - after all, someone already made the block, right? 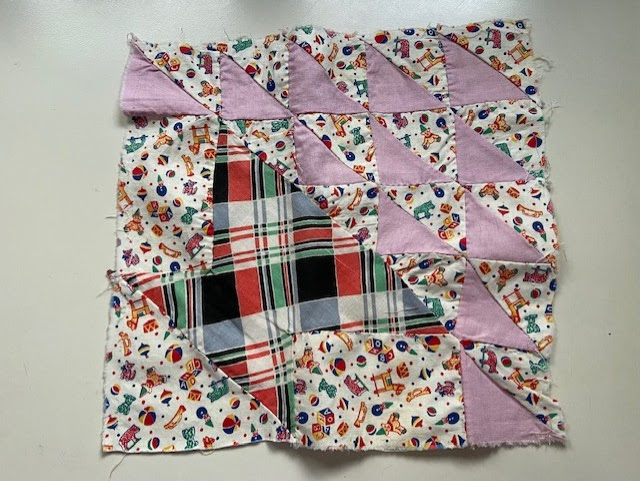 About 45 years ago I went to the Shipshewana, Indiana flea market and an elderly gentleman had a shoe box of quilt squares for sale.  The entire box was marked $2.00 and even factoring in inflation, it was a good deal.  Now, HE put the price on them but as I paid my  $2. he said, "my wife is going to kill me."  There were two designs.  This one I never did anything with because they were hopelessly wonky and frankly, I have enough to do with blocks that AREN'T wonky.  These looked hopeless and there were a lot of them.  When Lori put forth her challenge (and we had a year to do it, this isn't due till May 30) I knew these pink things would be what I would tackle.  We only had to do one, it was supposed to be mini. We could do ANYTHING with the old block. 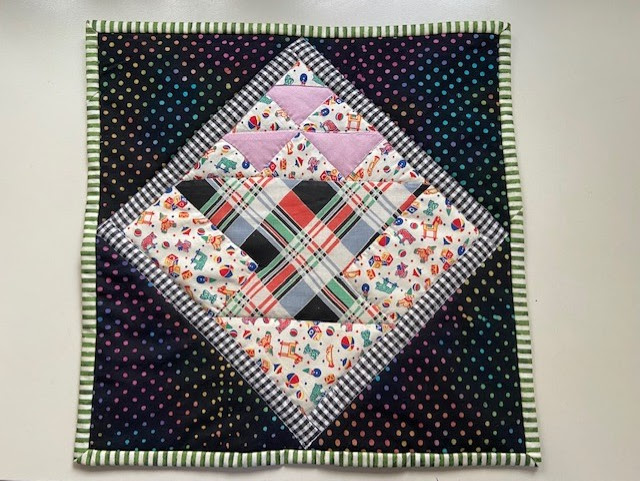 So this is what I did.  I started by taking the outer row of HSTs off and ironed the daylights out of it then auditioned many possibilities for a surround but everytime I tossed something black onto the square it just said "yes."  So now to send photos off to Lori and cross this one off the list. 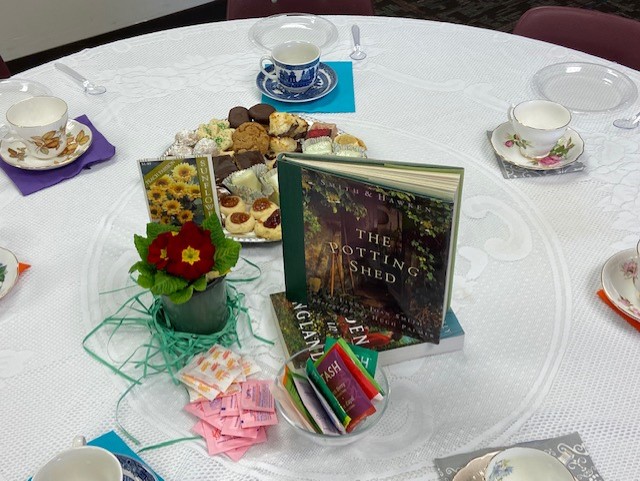 Each Spring the Friends of the Library (to which I belong) and the Museum (to which I belong) collaborate on a spring tea/speaker presentation.  Real tea cups, real tea, real cookies, a real speaker who presents on a topic related to the area and to women's history month.    We really weren't  sure BOC (Because Of Covid) if the doors would be opened and no one would come or we would be stampeded.  Well, it wasn't a stampede but the most we've ever hosted was 42 people and for this we had 58!  Everyone listened to a very interesting presentation while knoshing on so many cookie varieties we didn't have room on the platters.  Myself and two helpers did all of the baking. I mean, come on, would I serve a store bought cookie??? 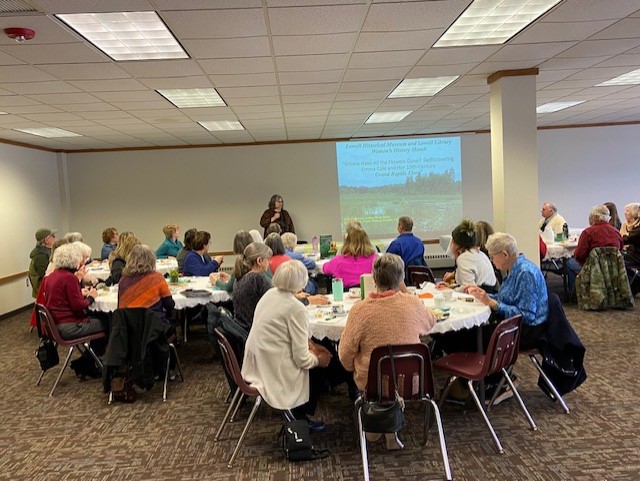 Our Brian and his daughter took the opportunity this week to have a finally vacation and have gone off to the Canary Islands escaping late February in England.  Now, PH and I would have loved England in February with Brian not to even imagine being in the Canary Islands at this time.  We were jealous.  Canary Islands?  Warm? Sunshine?  Other side of the world?

After Brian knew this trip was finally really going to happen (several have been planned and cancelled during  these last two years) we were very jealous. Then I wondered, could there be a Canary, Michigan?  I found the Canary Bar and Grille about an hour from here and a plan was hatched.

I told Brian we would be at the Canary Bar on Wednesday, March 3 and at 5 p.m., would be raising our glasses to him and his daughter and thus join them in hearts and spirits (pun intended.) 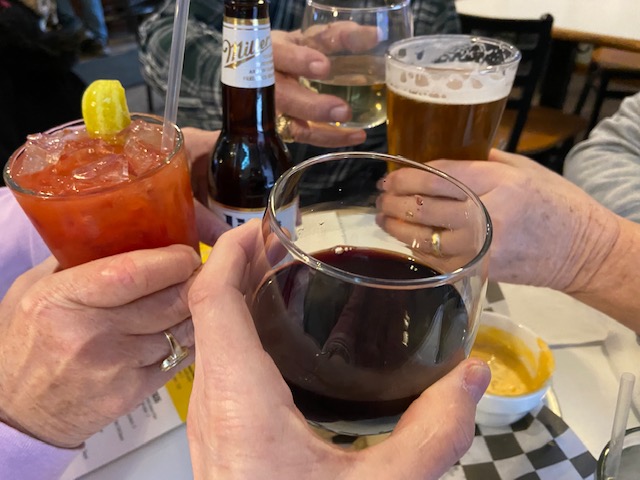 We met our friends, and at 5 p.m. we raised our glasses and saluted Brian and his daughter. Immediately I sent the image to him. 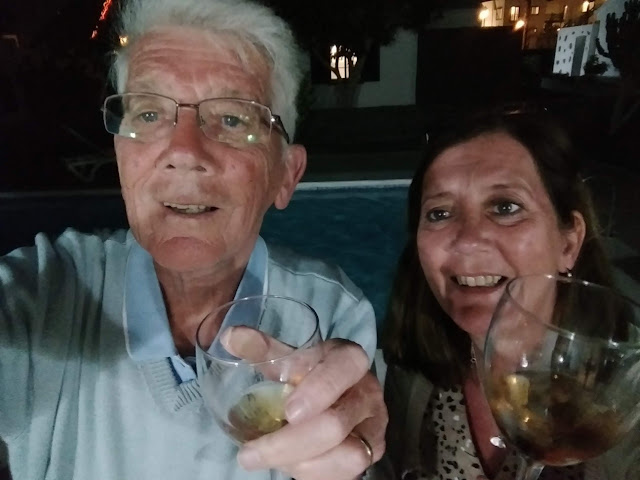 and received this one at the same time we were saluting them. 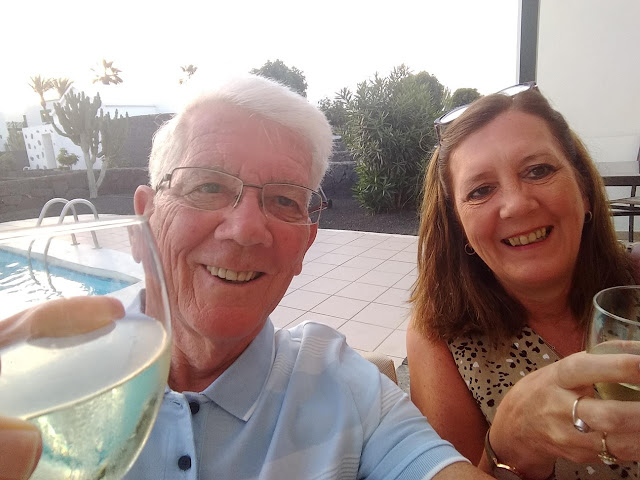 He also sent this one taken earlier in the day, which means they had a very nice head start on us!

And it also means you can have a moment with anyone anytime anywhere.  And this makes the world even smaller.

Cheers! (and hugs to you both)