This past week PH and I spent three days in  Chicago.  We treated ourselves to viewing a taping of a NPR (National Public Radio) program we love.  While we were there we had three whole days to  see the sights. 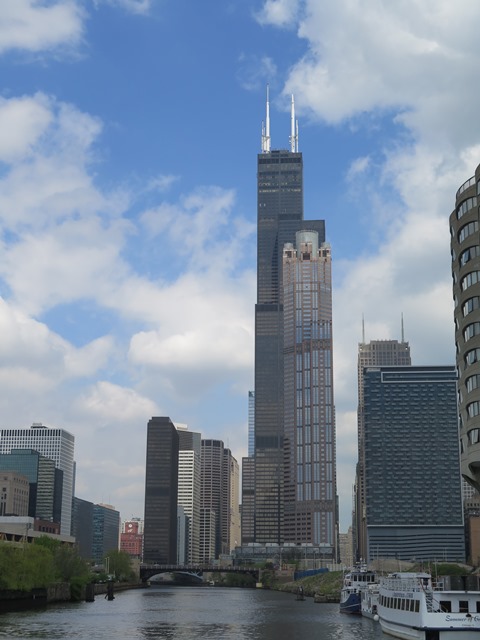 There is a building in Chicago that is so big it's just always there looming, like the tallest kid in Kindergarten, you can't help but notice it. Maybe a little like Frankenstein in the back of the line.  Today it's called Willis Tower but was built by and for the headquarters for Sears and to all Chicagoans, it remains The Sears Tower.  It's the tallest building in the Western Hemisphere at 110 stories (1,353 feet.) Taller than the Eiffel Tower. Taller than the Sphinx.  Taller than them all. 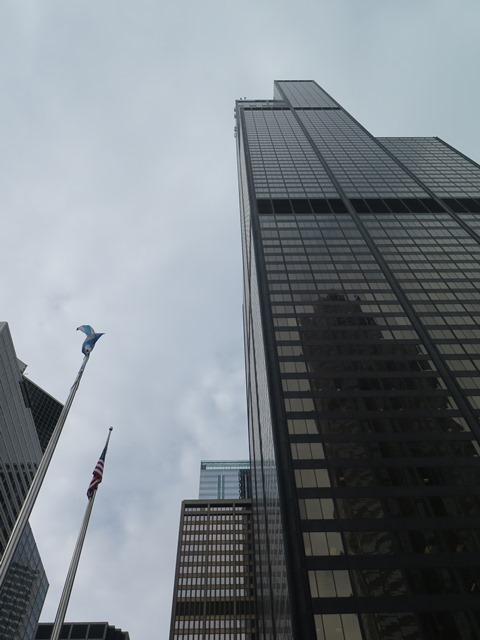 It is so tall, when  you look up from the street, you could fall over backward trying to see the top. Well, someone got the big idea of not only having an observation deck/floor, but also constructing four glass enclosed pockets that people can step into and see straight down to the street.  Can you see at the very tippy top of the building on the left side four little bump outs way up there?  Those are the glass "pockets."
Now, for a years I looked at pictures of people actually stepping out onto that glass platform and quite boisterously declared they were crazy and there aren't enough underpants in the world to  make me do that.  I'd die of fright.
Well.  Never say never.  We arrived in Chicago Wednesday morning.  Union Station (train station) is across the street from this building and as we emerged and started our walk to the hotel I suddenly told PH I wanted to try it.  I wanted to at least TRY to try it.  I don't know why.  It scared me to death to even consider it, but I couldn't let go of the idea and was convinced I was going to at least try. 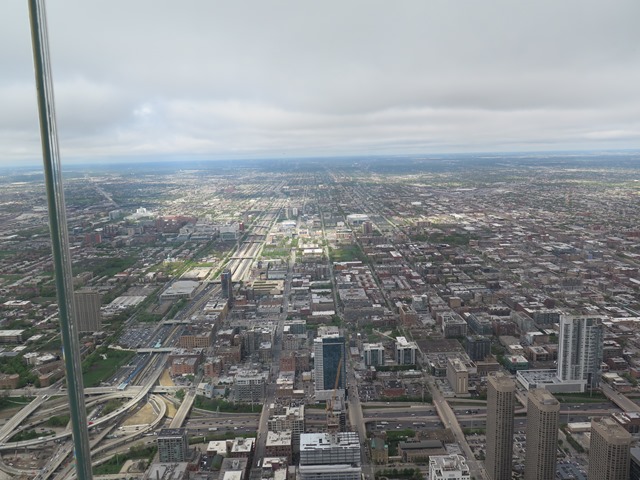 It was a 1.5 minute elevator ride to the top.  Stepping out of the elevator we are met with beautiful views of the city.  On a clear day you can see 50 miles. It really was beautiful.  The observation room was big, windows all around, and they will let as many as 600 people up there at a time. This wasn't intimidating, it was more Wow! And there weren't anywhere near 600 people there that morning. 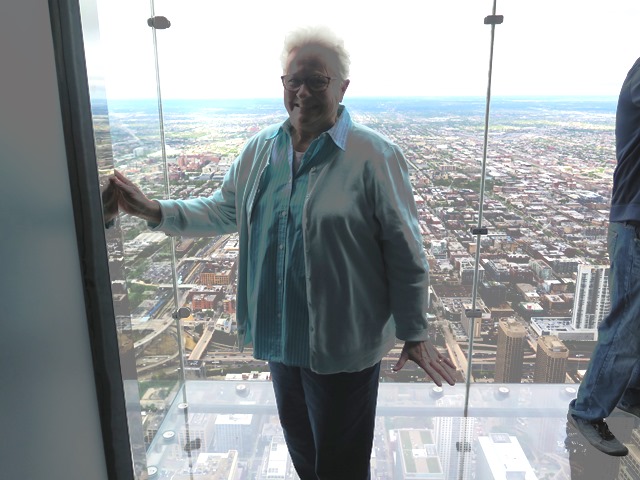 The moment of truth.  I was absolutely p e t r i f i e d.  I was holding my breath so tight my teeth hurt. Look at my hands.  I was taut.  T a u t.  My heart was racing and I was gulping. 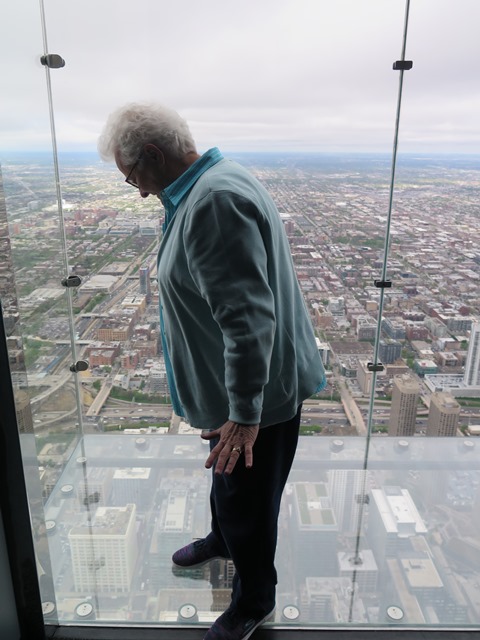 Notice I kept my left foot touching the carpet.  It just wouldn't go in any further.  Put your right foot in, put your right foot out...do the hokey pokey.... Just look at my hand. I was trying so hard to breathe.  I looked down though.  And PH was down there somewhere holding down the ground. 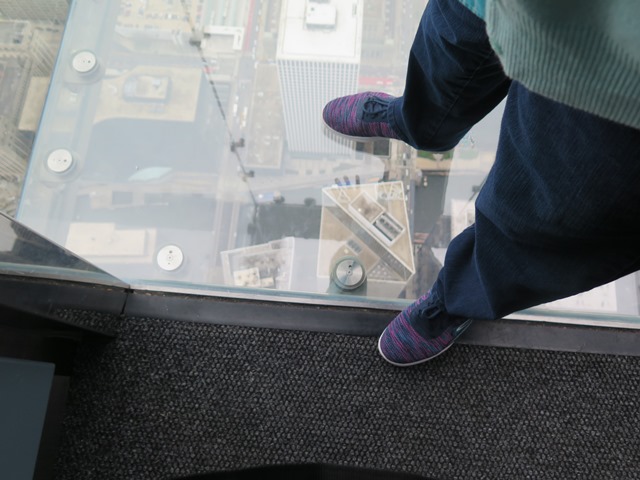 The gentleman who was documenting this for me got a good shot of my feet, and how far down the rest of those rooftops are. 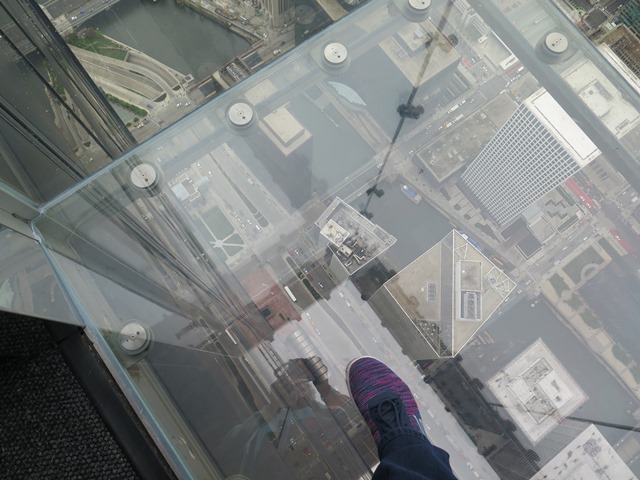 They say when the thickness and safety of this glass was tested in the factory, they used elephants.  I said, well, then it will hold me, but you just don't get that feeling when you are standing there.
As I was leaving, I walked by one of the other window bumps and there was in one, a little girl, maybe two years old, lying down on her back and spreading her arms and legs like she was making a snow angel and her dad was taking pictures.   I just stood there on the edge of the glass and carpet and watched her.  A woman my age came up beside me, took my hand and said, "Come on.  I didn't think I could do it, but I did.  I'll go with you."  And holding my hand she and I went ALL the way out on the glass.  No foot holding back in the room.  She held my hand till I started to breathe again and then we left.
I had enough.  PH was waiting in the lobby for me so I went to the elevator. While waiting I told the elevator attendant, "They should sell clean underpants in the gift shop." 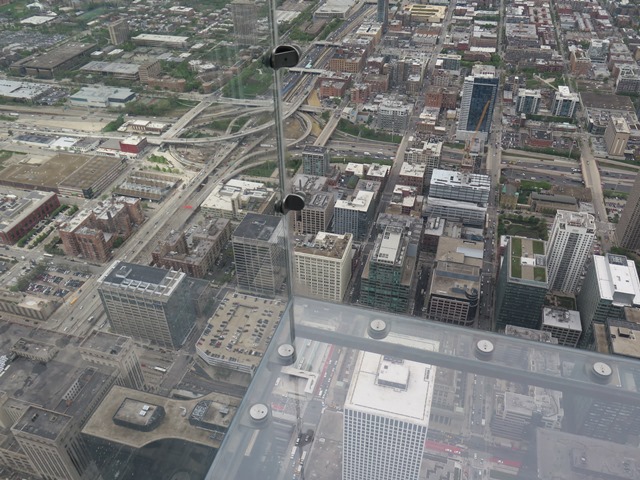 This was without a doubt the scariest bravest thing I've ever done. Ever.
ADDENDUM:  Today I showed the pictures to four-year-old Mikey and he said, "Did you jump?"
Posted by Denice Barker at 4/29/2017 4 comments:


Sometimes you find an author you just can’t get enough of. You read everything they offer and find each new book is better than the ones before. You wait, tapping your fingers on the counter waiting for the next book.  And then they try something new and different and it’s a little scary to open to the first page and begin reading because you don’t know if you’ll like the new and oh, my gosh, what if you don’t like it?!
Fredrik Backman wrote the much beloved A Man Called Ove.  That’s how I met him as an author.  Who didn’t love that book?  Then he gave us My Grandmother Asked Me to Tell You She’s Sorry and again, I thought, “wow, he really gets old people!”  I hope you liked that one as much as I did.  But then, oh my, he gave us Britt-Marie Was Here and I didn’t think it could get any better.  Until now.  Until Beartown.
Beartown is Backman’s departure from old people.  Beartown is thick, meaty, deep, multi-layered, intense, timely, mysterious.  Beartown is us.
Beartown is hockey and hockey is Beartown.  The small town lives and breathes hockey and prays and dreams for a winning team, a winning season, and ultimately, winning it all, the national championship.  The dreams of Beartown are dependent on the teenage boys who make up the junior ice hockey team.  Finally, after spending their whole lives on the ice, this group of boys has coalesced into the team that can do it all. The hopes of the parents, siblings, the business sponsors, the club, the coaches, managers and the boys themselves lie on this one team’s shoulders.  They have the talent.  They can do it.  The bonds between them are unbreakable. This time, with this team, they will be second best no more.
Everyone in this town is represented, everyone in this town has a stake in the outcome and everyone in this town is invested in this sport and this particular team. And then something happens that topples the pedestal and everything that was at stake is even more so.
First thing you are going to ask yourself is, “Why would I read about hockey?”  You aren’t reading about hockey, you are reading about the people OF hockey.  And besides, it’s the best story you’ll read in a very long time. You know I don’t like to give away too much, I want people to know just enough and then go find out for themselves.  Beartown is nothing like Fredrik Backman’s other books but oh, please, don’t let that stop you from reading this.  This one isn’t about old people, this one is about all of us. This story is deep, taut, though provoking, and real.  Oh, so very real.  Fredrik Backman is only getting better.


The Last Neanderthal by Claire Cameron

When I was much younger and taking anthropology classes I remember being profoundly struck by the information that the Neanderthal buried their dead with ceremony.  If they were a lost link, a dead branch on the evolutionary tree, or assimilated by the next rung on the evolutionary ladder, when I learned this information I knew then that the Neanderthal was more than we were being taught.  If a burial is done with ceremony there is some feeling in the psyche that there is more.
In The Last Neanderthal author Cameron introduces us to Girl and her family. They are preparing to join the other families at the fishing site where new families will be formed and their lives will continue. Unbeknownst to Girl’s family the numbers of Neanderthal families are dwindling.  Girl’s family meets with difficulties and dangers and because their family is small, they become an even smaller unit.  In the end, Girl and Runt, a strange looking foundling who is cared for by Girl’s family, are the ones who must forge on for the sake of survival, not realizing they are the only ones left, and not realizing further that Runt isn’t one of them.
Fast forward 40,000 years to an excavation site run by Rosamund Gale where two skeletons are found lying on their sides, facing each other with arms and hands entwined.  Like lovers who fell asleep facing and holding each other.  But one of the skeletons is Neanderthal and one is not. It is Rosamund’s task to convince the scientific community that not only did Neanderthal and more modern man coexist, they could have lived together as family.  It’s hard to upend a long held scientific thought.  Perhaps the Neanderthal’s didn’t just die off or were killed by those who came after.  Perhaps there was cooperation and family units. It’s a tough sell but one Rose is determined to prove with this find. But she has the added obstacle of being hugely pregnant and is running head long into chauvinistic opposition.
I thought this might be a decent story, one that was a bit on the Indiana Jones spectrum but I was very and pleasantly surprised it was more than a decent story, it was a very good story, a thinker, and nowhere near Indiana Jones.