Last weekend of summer vacation and the girls are here.  We thought we would have an action packed 5 days, but they are exhausted from their action packed summer and just want to chill.  Never would Elizabeth admit she is ready for school to start.


We went for our last picking yesterday. 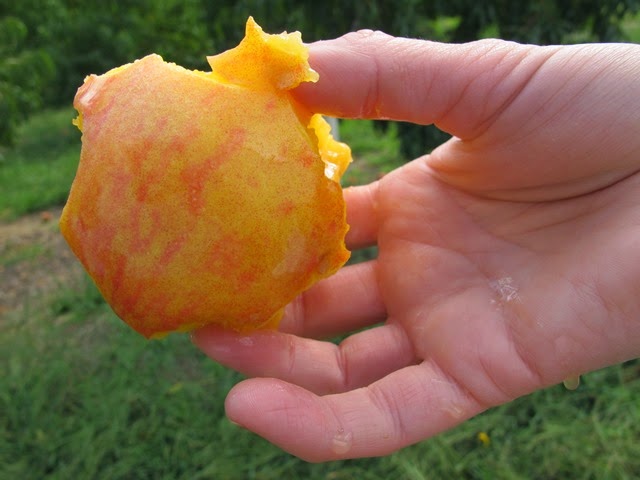 The peaches were tree ripened, sweet and juicy. Can you see the juice running off my daughter's hand? 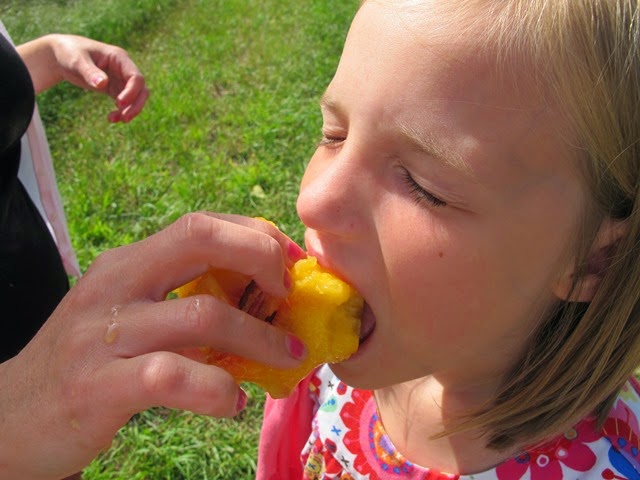 Elizabeth wanted some bites but didn't want to get messy!  Look at that juice! 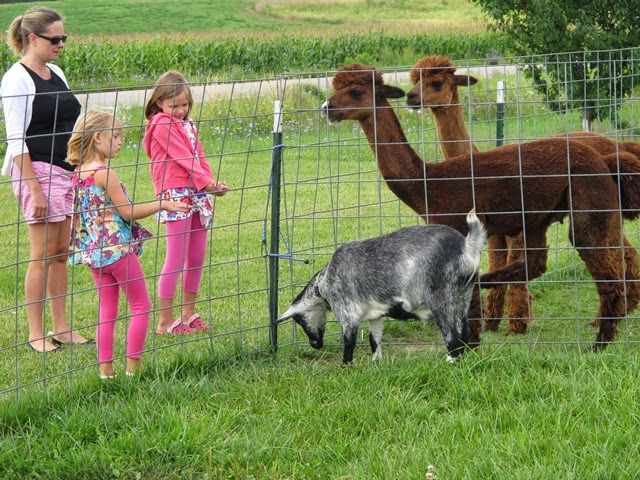 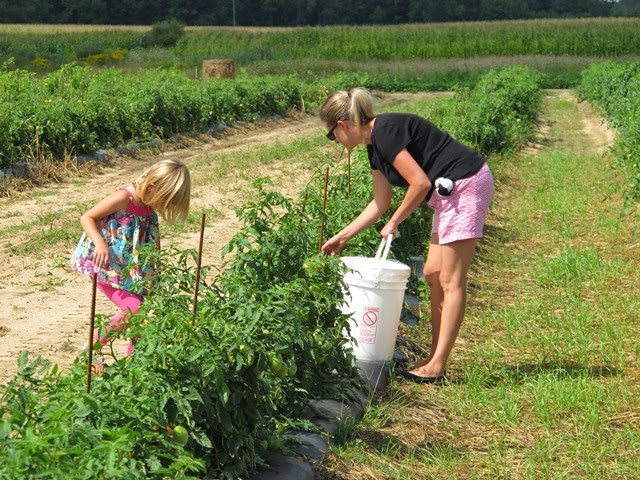 We picked tomatoes, peppers, eggplant and zucchini.  This farm is an amazing bargain.  Fill that 5 gallon bucket with anything and it's $7.50. My daughter started with tomatoes, went to peppers to fill in the blanks in the bucket then put in eggplant while Adelaide went off to find the zucchini.  The farmer gave us the tip years ago that you put the big things in first then pick the little things and they'll fall through and fill in the blanks in the bucket, thus getting the most for our money.

Roma tomatoes aren't ready yet, it's been too chilly for tomatoes, but in a week or so I'll go back and pick her buckets for her.  She dries them in the oven and stores them in the freezer.

I also picked a half size bucket with baby potatoes. 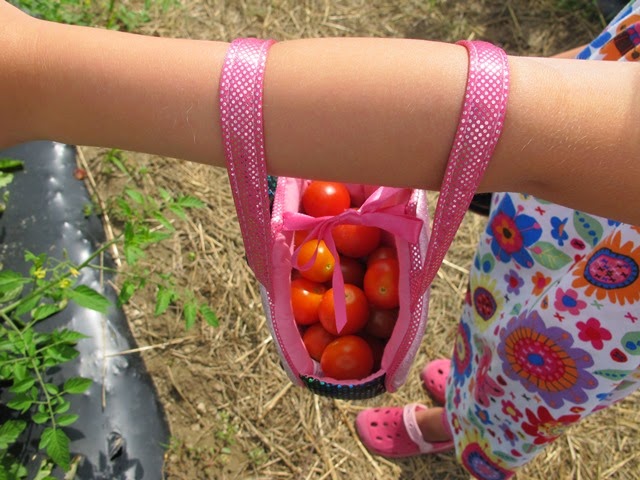 Elizabeth had her own system 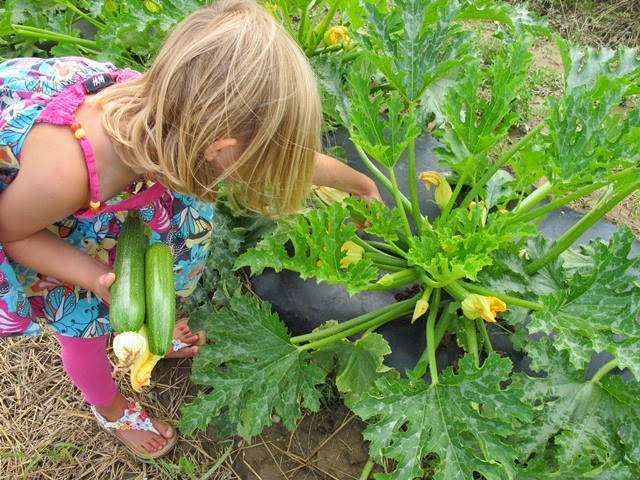 Adelaide liked picking the zucchini.   She discovered if you twist them they come off the vine easily. 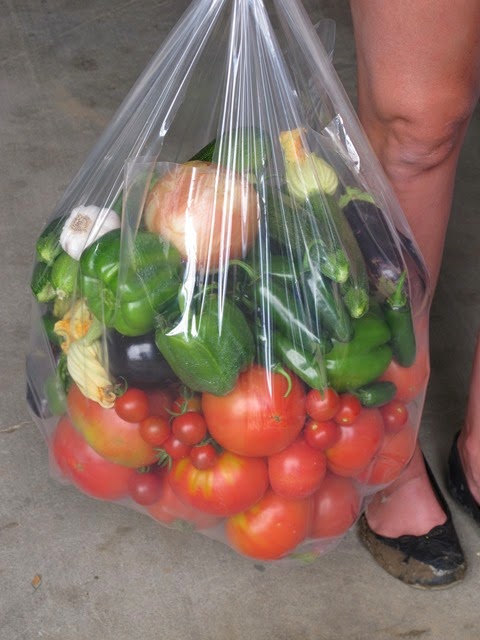 I think we all know who Gutenberg is.  Like we all know who Christopher Columbus is. We can do it in one sentence.  “He invented moveable type and printed the Bible.” Done deal. But like we don’t really know off the top of our heads what Columbus himself was like, or what his coming to this hemisphere truly meant. One sentence about Johann Gensfleisch, Gutenberg, isn’t going to do it either.  If I told you all about this book I’d be blathering and really, I couldn’t tell you enough.  Let it be said, it was the most informative novel I’d read in years and couldn’t put it down till late at night nor could I wait to get back to it.

At the time, what Gutenberg did had to be done in absolute secrecy if he was going to trump the Church and the world. This secret that had to be kept for over five years because that’s how long it took to find a metal alloy that would hold up to repeated pressings without losing shape and find a way to cast those letters fast and efficiently.  No one had ever done this casting of small letters before. Ever. Each letter had to be set minutely at the same depth or the pressing would be uneven.  The ink would run loose in the summer and hard in the winter. And then they had to set the type and print.

It took a lot of sheep (velum) and ink and lead and varnish and money and dedication while the way was being invented as these workers who dedicated themselves to the project went along. Mistakes were made, new processes had to be worked out. Gutenberg is given the credit for the Bible but he had a crew of four men who actually did the work.  Gutenberg walked off the project half way through. There goes our romantic image of a single man lowering a press and imprinting a page. He was volatile, rude, pompous and self-centered and if it weren’t for the four men he chose this Bible would never have been printed. At least not by him. To do what Gutenberg envisioned was considered blasphemous, the work of the devil because the work of a scribe is God given. No one on earth had seen anything like this.

First among his crew was Peter Schoeffer, a scribe whose skill with the pen was known to many.  He was taken from the monastery where he worked at copying scripts to work for Gutenberg.  While Peter was at first bitter to be forced to give up his work eventually he was essential to the work on the Bible.


Feuds between Gutenberg and their investor, the guilds trying to find out what was going on in that workplace, plague, Crusades, the pompousness of the Church, the struggle to find a text to print. None of the process was easy. None of it ever done before.

In the end, Schoeffer said, “Gutenberg’s genius lay in ordering the work, in breaking down and rearranging all the pieces.”   Actually, they printed 180 copies.  And the world would never be the same. Between 1450 and 1500, fifty short years, more than 250 printers set up shop.

If you are a reader, if you’ve ever held a book in your hands we have Gutenberg and his vision and the dedication of his workers to thank for it.  What he did was move the world forward in one giant leap.  I would like to quote a passage, “His type was artificial, yes, but even so the words it made were still the same. Vain, to stand against it: printing would roll out and inundate the world.” A printed book with letters made artificially was still a book.

And the irony was not lost on me that I read an advance copy of this book on my Kindle.

They say not to judge a book by its cover but I had to with this one.  I loved the idea of this cover and when offered a chance to read an advance copy the cover was what made my decision.

Chirp is eleven and her sister Rachel two years older.  That’s too young for your life to change in front of your face.  Naomi is a birder.  She loves birds, learning about them, telling people about them and going to her secret spot on Cape Cod to watch them.  And when she’s troubled her nest is her bedroom.

Chirp’s life changes when her mother’s health is compromised.  Suddenly home isn’t the same. No comfort of two Oreo cookies and a glass of milk when she comes home from school.  No amount of dancing can cheer mom up. Mom was a dancer, and then is handed a diagnosis of Multiple Sclerosis.  She goes into a severe depression and everything is different.  Chirp always had Rachel but now she is not around anymore, managing her anger and seeking solace in what she sees as the normal lives of her friends.

Chirp and her friend Joey discover what it means to have and be a friend as they both find themselves fledglings looking over the edge of their nests at the world beyond. She discovers what strength there is in family and the safety of the nest.   And she learns what it is to start to think for herself. Does being a “good girl” mean you don’t ever make waves or stick up for yourself? She discovers this about herself at school.

Little things make you smile while you’re reading this story.  Even her struggles have humor but it’s her strength that draws you in. Chirp is a vulnerable young girl who discovers her own strength through her family, her friend Joey, and by her own wits as she stands on the edge of her nest looking out preparing to make that leap of faith.

This book is for middle graders and if I would feel proud to hand it to any to read.