PH always teases me about my birthday extravaganzas that last a week.  Of course they don't. My birthday is in the middle of winter and during my life they have more often been cancelled because of the blizzard than celebrated.  But HIS birthday.  Well, his birthday is always during our three day Memorial Day holiday weekend and he celebrates with marching bands and waving flags! 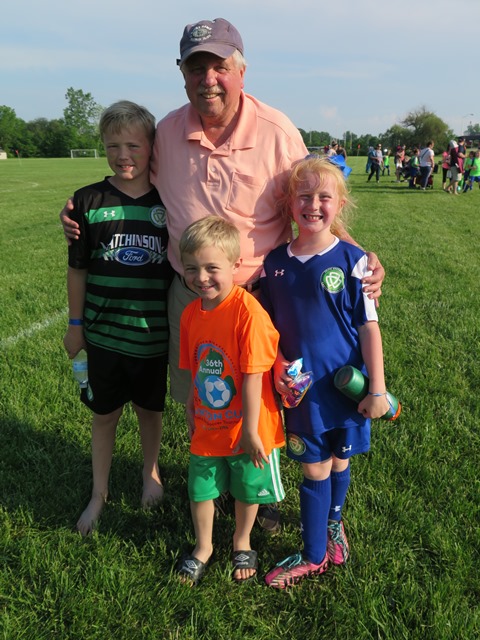 Day One:  Travelled to the other side of the state to watch the kids play in the huge soccer tournament their city hosts each Memorial Day weekend.  Charlie and Ceci both played Saturday. 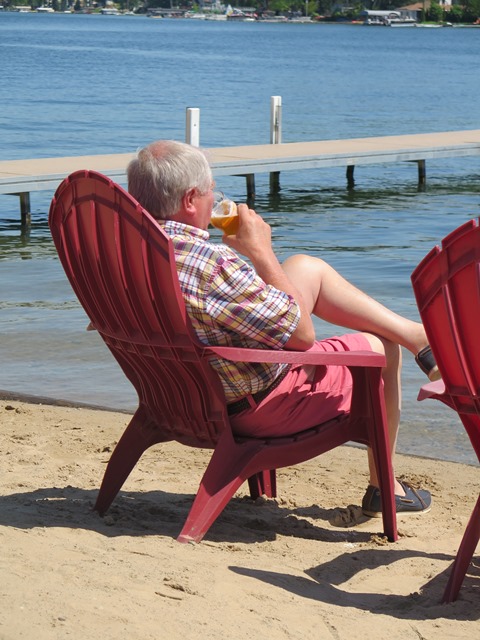 Day Two:  We met friends Marge and Harry at a restaurant that we all love on a nearby lake.  Ambiance is unmatched.  PH enjoys beer #1 on the small beach while he waits for  M & H to arrive. 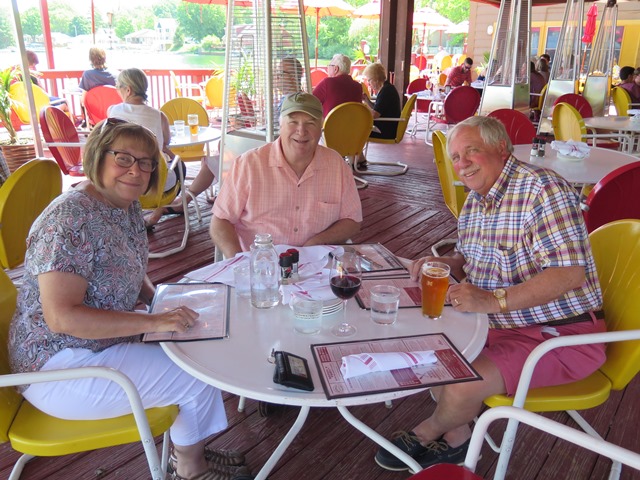 It was a hot, hot, hot day and so dining on the porch wasn't even a question.  It was a really wonderful birthday afternoon. 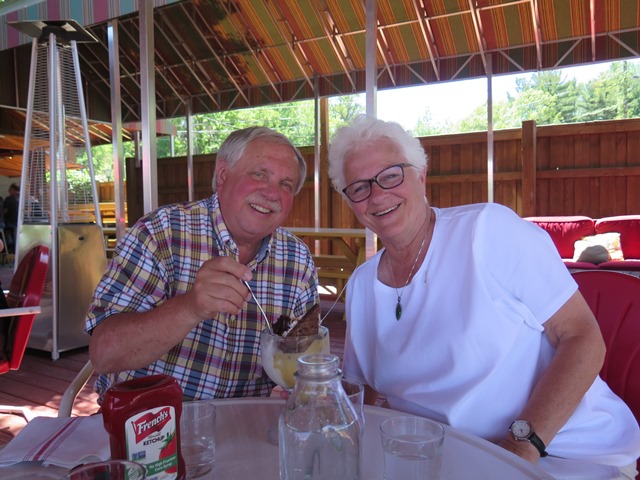 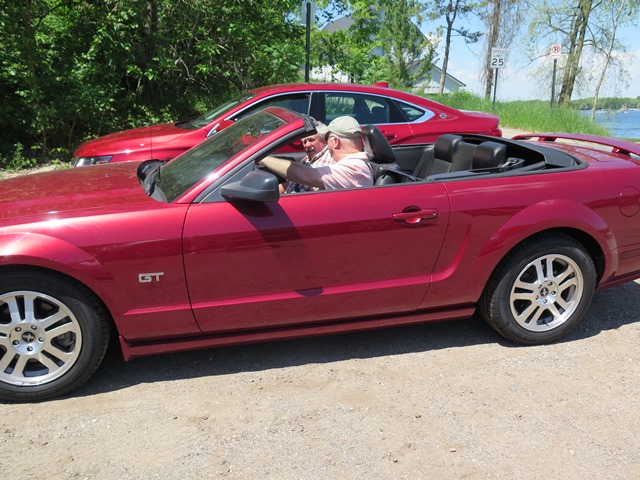 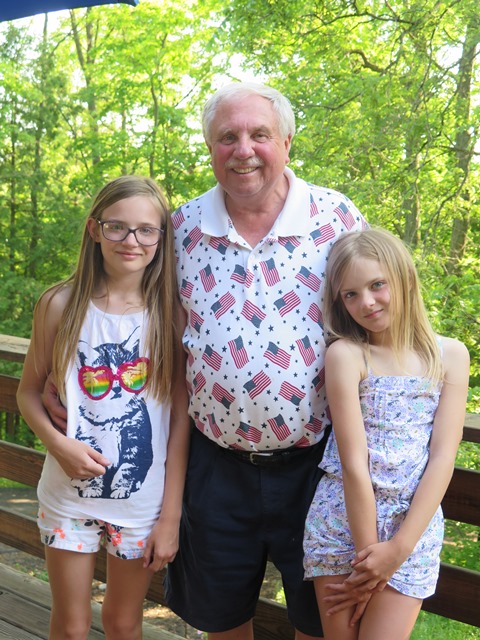 Day Three:  Our daughter and her family came for dinner.  Whew! A big weekend of partying!

Weather is hot, hot, hot.  Really hot.  All time records are being broken and they say we will have one more day of it - today.  Then we get some rain and relief.  I have stubbornly not turned on the air conditioner.  Just last weekend I was wearing heavy socks and thick sweaters because it was so very cold.  Basically, it feels like we had an 8 month winter and before I shut all the windows and make the house cold, I'm being stubborn.  We live on top of a hill in the forest so have shade and breeze and have managed.
Posted by Denice Barker at 5/29/2018 3 comments:

This little quilt is on it's way to a baby girl in France.  It's simple, scrappy, pink-ish, and yes, I used a sewing machine for this one.  Except for the big stitch quilting in the white squares only.  (Please notice the trees have leafed out and we are now back in shade!) 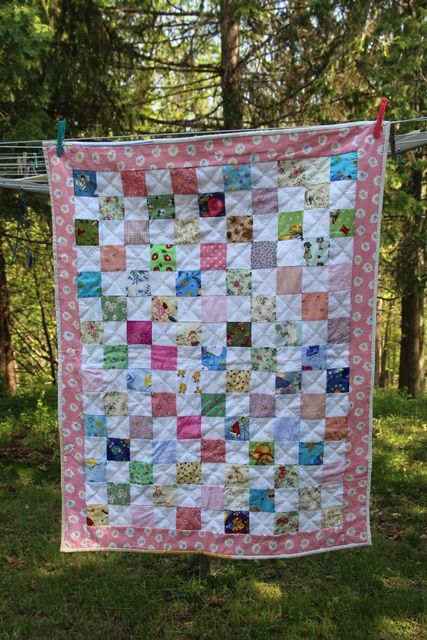 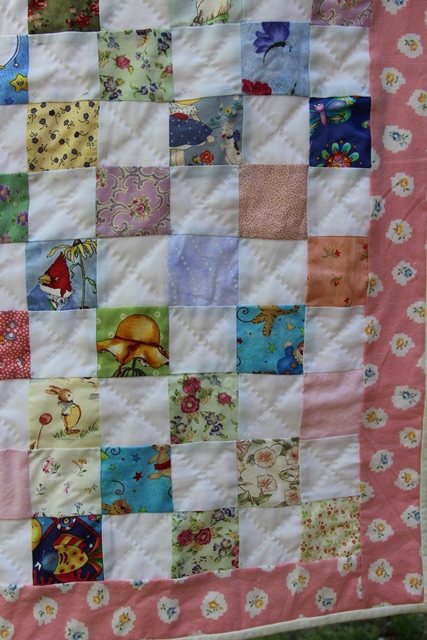 The squares were 3 inches cut so 2.5 finished.  It's amazing, isn't it that no matter how many scraps you use there are even more left? 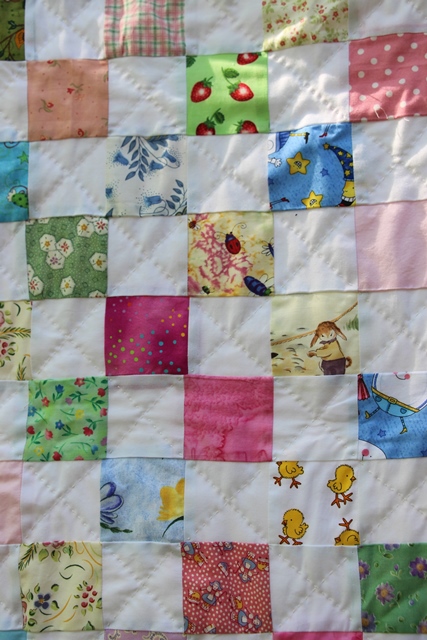 
The Storm by Arif Anwar

I wanted to read this book because I don’t usually read books set in or near India.  I’ve tried but the culture itself seems too chaotic and I can’t keep my head focused as I try to imagine myself IN the story.  But The Storm seemed different and so I tried again.  This time, this story, this telling kept me focused.  I think because the author took away the chaos of life in India and focused completely on the stories of his characters.
Spanning the time between 1942 and 2004, in India and Bangladesh just before and after the Partition of India to form East Pakistan, making a place for Hindus and Muslims to separate themselves from each other, and just before the Bhola Cyclone of 1970, and the looming deadline of an expiring visa there is a lot of ground to cover and many life stories to tell.
Principally, this is the story of Shahryar, and it is his visa that is expiring.  As the day draws closer he spends more and more time with his daughter, coming to terms with the fact he will be giving over her raising to Anna’s mother and her boyfriend because he knows if he goes back to Bangladesh he won’t be able to return to the U.S.  Anna is lucky, though, she has three adults in her life who want only the best and are in agreement that Shahryar will always be a part of Anna.
This is also the story of how Shahryar became Shahryar because at first he wasn’t.  It is the story of his parents, poor and dependent on fishing, both aware of the coming storm but no one was prepared for the loss of over half a million lives in one night. One night! As Shahryar must do for Anna, his parents did for him and because of that, his life was spared.  He was a very young child and was brought up as the son of the couple who harbored him during the storm, never knowing he was born someone else.
This is also the story of a Japanese pilot and a gift.  It is the story of a British doctor and her gift.
Always, it is the story of how the result of selfless acts, risks in times of danger, and chance can swirl in time and settle to shape someone’s life. It is the story that shows us in so many ways how everything we do and everyone we know are all connected.
Posted by Denice Barker at 5/15/2018 No comments: