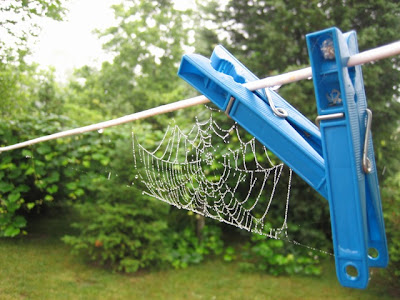 It's spider season. They're everywhere. I can't hang clothes without a thorough inspection of the nooks and crannies of the clothespin. They're in there. Waiting. For me. They wait to crawl into the pockets of my blouses or jeans. Wait. Till I wear the clothes. So they can come crawling out. And get me. They're out there. And sometimes they're very big. They don't have to be big to elicit the response they get from me. Many years ago while visiting an aunt and uncle in Acapulco, my uncle said when I screamed he didn't know whether to bring a newspaper or a shotgun. The scream was the same! I keep Patient Husband handy now. All I have to do is yell, "Spider!!!" and he comes, dragging to where I am. Sometimes it's a precariously out of reach place, but I don't care. I just keep hopping from one foot to the other imploring, "don't miss! don't miss! don't you dare miss!" I don't do spiders.
We are back into the work groove, so to speak. But the 6 a.m. wakeup call is brutal. I finally figured out today why it's so hard. On weekends or non-school days I can wake up, lay there a few minutes, feel myself slowly becoming conscious. But on work days when the alarm goes off we have to hit the floor running. Tonight, just now, we both put our faces into the mirror and compared dark circles under our eyes. And then debated whose were worse. Sigh.
Not getting much quilting done during the week. Over the weekend though I finished cutting the triangles for a flying geese border, worked on the flower quilt Elizabeth wants (I'm closing in on that one) and started thinking of a stocking for Cecilia.
Posted by Denice Barker at 9/21/2010 No comments:

This was hard! I was having a very hard time thinking of something beginning with "J" - everything was an adjective! Juicy apple?...nope. Gin and tonic?....oops! I finally asked Patient Husband if he could think of something beginning with "J" and immediately he said, "jumprope!" Well, THAT was easy! I work in a school! This morning I went to the very tall gym teacher and asked him to bring down the box of jumpropes from the top shelf so I could take a pic. 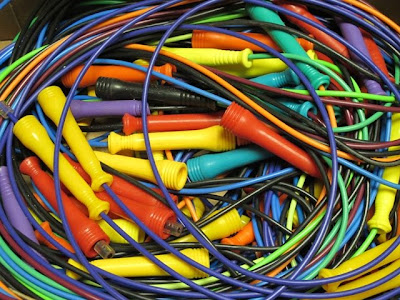 When I saw them I wondered if I should save them for the NEXT Snappyfriends challenge. But no, "J" was too hard.
We found a car to replace the one totalled in the accident. Elizabeth told her daddy on the phone when it happened, "Daddy, someone bumped into Grandma's car and BROKE it!" Yup. And it's been a lot of fun driving a VW Beetle in the meantime. It's a zippy little car.
Posted by Denice Barker at 9/15/2010 1 comment:

I don't know where the time went this week. School started. I didn't have the kids yet but will starting tomorrow. This year the library will be very different because I'll see the little ones twice a week instead of once. I'm a little excited but I'm a little worried, too. The week will be very intense and sometimes I just lose track of whole weeks when that happens. I can't afford to not notice things anymore!

I was in an accident Tuesday. I was sitting at a red light and a very much older gentleman was more concerned about the ice cream sundae he purchased at McDonalds than where he was going and slammed into me from behind. I was very lucky to be wearing my seat belt because I'd have been thrown into the windshield, but as it happened, I was just sore and tender the rest of the week. Lucky me!
Unlucky for the car, though. Because the car is 8 years old and has 200,000 miles on it, the decision will more than likely be to total it. A new car is not in the budget right now. But my rental is a special treat. I am driving a pale blue VW Beetle! What a fun little car! It's SO cute and I smile as I'm driving. We should get the final verdict on "my" car tomorrow.
There has been no quilting and no reading this week. How does THAT happen!! I haven't even been in "my" room all week. So there's nothing to show or tell.
I have to go read some blogs....till later....
OH! Guess who bid on and won Christine! My son and daughter-in-law! Christine is still in the family! Who would have thought!
We were thrilled to see them at the event and here's the latest on Charlie and Cecilia. 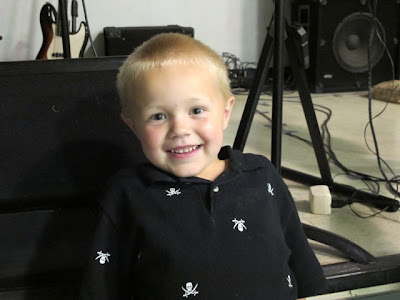 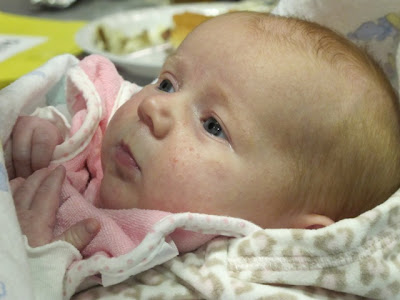 Christine started out to be something very different than she turned out. She was supposed to be a landscape collage of farm fields in October. She decided from the day I made the first cut in the first piece of fabric I collected for almost a year for her, that she was in charge of this project. As often happens, when you start out to create something new. Authors talk about their characters taking over the story and sometimes star in a book of their own. Paintings become "possessed" of their spirit. So, Christine was born. 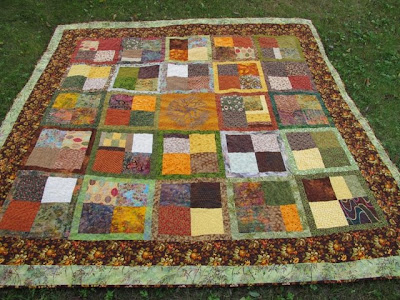 Her colors are more beautiful than the picture. Maybe a closeup...nope...just trust me. Every single thing I did to bring the picture in my mind to the cloth failed. She kept telling me this project was going to go her way. I was frustrated to the point of a battle of wills but I kept on with her. I needed to see what it was SHE wanted to be. 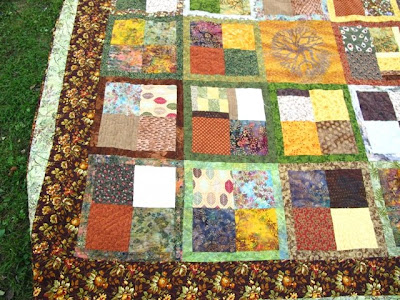 Now for her backside..

I know you quilters have had persnickety projects and you probably chose to stuff the thing in a drawer for at least a new decade. But I persisted. And every single cut I made was wrong for me but turned out to be right for her. That's why the back has a border. Cut the brown floral wrong. Put on a border. Happen to notice in the quilt shop a really nice leafy border on a display quilt and think..."I can do that..." 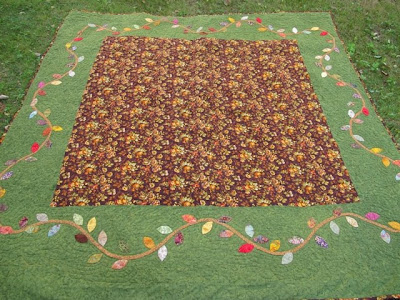 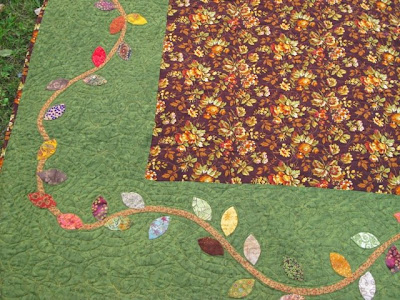 Then, my niece's husband, a young, active nonsmoking 42 year old found he had throat cancer. He was told this is the kind of thing you get after a life of hard drinking and smoking. He is neither. After a very rough summer of very aggressive daily treatments in a hospital 150 miles away, he is waiting three months to find out if he's on the mend for real.
Next Saturday, the 11th, there is going to be a benefit for him and his family to help with medical bills and such. I asked my brother what we could do and he said there was going to be a silent auction and if we could find something/s? 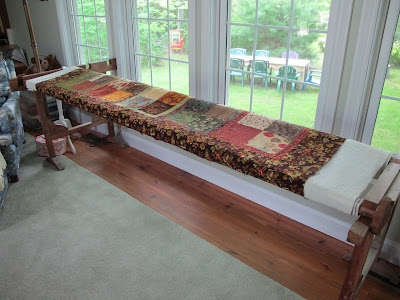 One night I was staring at Christine on her floor frame while I was mulling possibilities. I had an AHA! moment. But there was no way she could be hand quilted in a week so I called a friend who has a longarm machine and told her what I was thinking. She dropped her projects and quilted Christine for me. This weekend I put the binding on and voila! Now she is finished, she is going to go to support a good cause and she will have a new home.

I'm glad for so many reasons. She's finished. She's going to do something good. She will be gone from my life but someone will love her. Her colors are beautiful, a good draw for the fall season and no one there will know that she started out as an idea to celebrate the beauty of fall - or maybe they'll get it because she is Christine. Someone will love her and just have to have her and will pay for that right. And it will all help Brian. 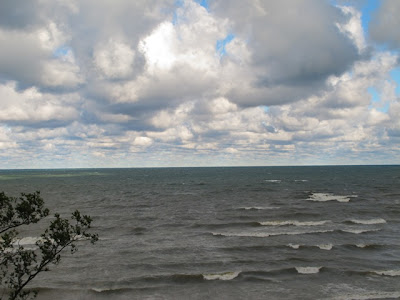 If I was a painter I'd have set my easel on the bluff this weekend and tried to capture this sky. Although in the gale force winds whipping up 14 foot waves, the easel would have had to be chained to a tree. We had the first real break in the hot weather and Saturday's temperature was the coldest Sept. 4 since 1913. Now, that doesn't mean it was freezing, but it was chilly and so very, very windy but that brings all sorts of people to the beaches and piers to see crashing waves. But that sky...it was amazing!

We spent this holiday weekend, the last before school starts tomorrow, working very hard. We have a brick walk that leads to the front door. I couldn't stand the weeds any longer. I started taking all of the bricks up, pulling weeds, discovering how wide the path really is once I tore out the thyme that became so invasive. Patient Husband then got out the landscape fabric, got sand and paving sand and we crawled and fixed and lay bricks. It's amazing how wide that path really was/is! I can't stop looking at it.