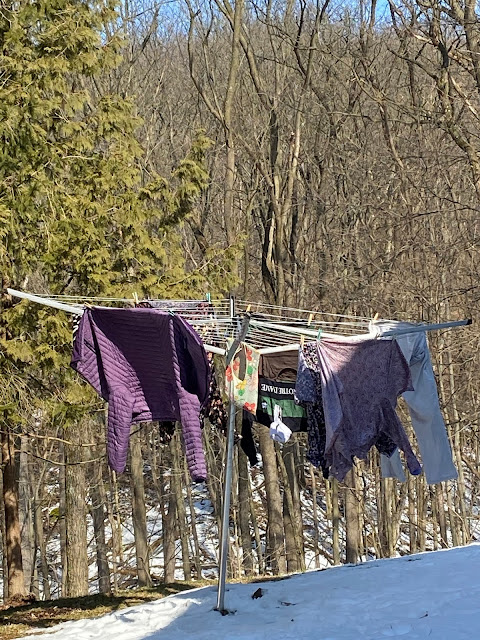 Around here if you get a day like today at the end of February you can go a little crazy with it.  Blue skies, sunshine, temperatures in the high 40's.  Even if there is a little snow on the ground we put up the clothesline and hung the first load of the season.  There's even a gentle breeze.

We found James Brandess quite sick today so there was no sitting for the portrait finish.  You'll just have to wait for the unveiling.
Posted by Denice Barker at 2/23/2020 1 comment:

Today was the day! 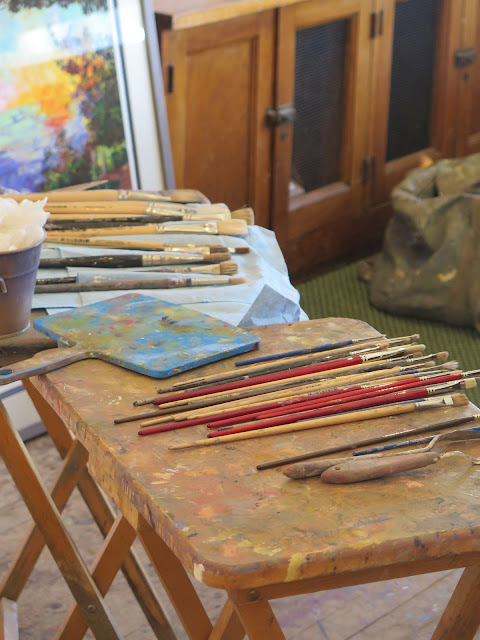 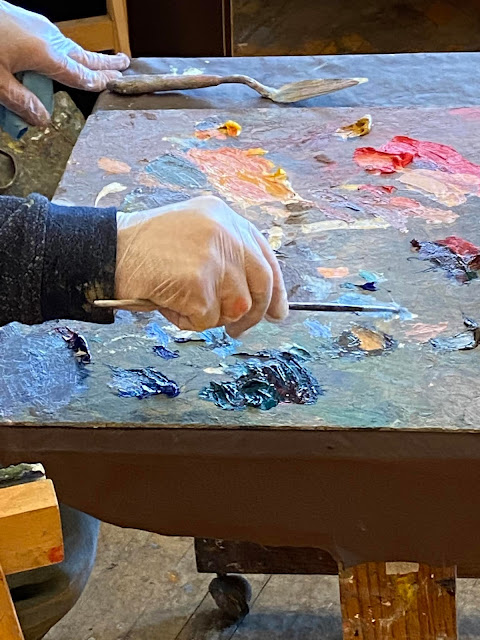 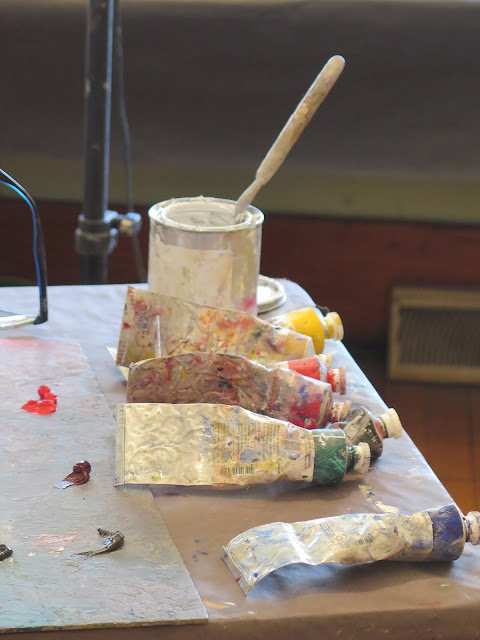 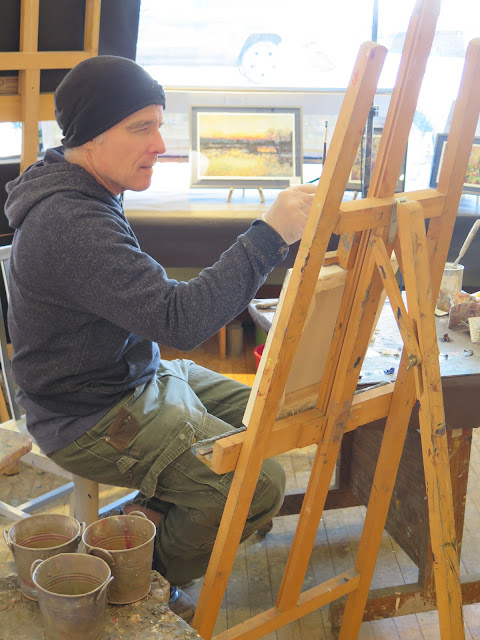 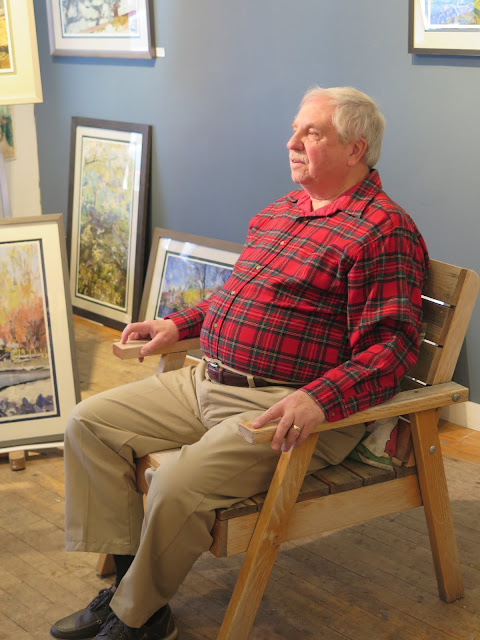 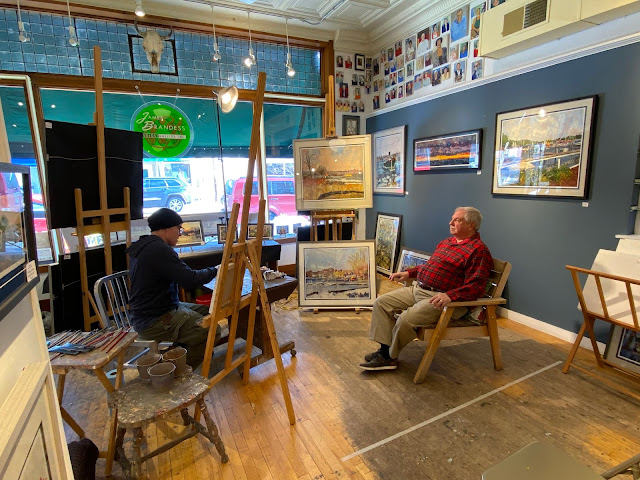 PH had a big year.  He turned one of the "0" numbers on his birthday, he officially sort of retired so I thought it would be fun for him to mark the end of his big year with a sitting for a portrait with James Brandess, an artist we've admired, followed and had the good fortune to commission for a work for us more than 20 years ago.   Now it was PH's turn to have his image interpreted by James in his impressionistic style.  It isn't finished yet, so you'll have to wait for the unveiling.  We've seen it in its 'this-is-it-so-far-just-in-case-you-want-a refund' stage. You will have to wait.

I think I'm channeling my mother-in-law.  You see, if she was having company and she didn't think everyone would like one thing, she'd make another something so everyone would be happy.  When our son was going through his fussy eating years the roast beast or her amazing fried chicken would be offset for him with some smoky link sausages. We were all delighted with OUR meal - especially her chicken - but in some convoluted way, he was happy with his meal, too.
My favorite story was the time we arrived for dinner and whatever she was serving, I don't remember what it was now,  didn't require a gravy.  But the day before she roasted the beast so she would have drippings to make gravy "just in case someone wanted gravy."  The roast was in the refrigerator in the basement waiting for another day, another meal, but not the one we were having that day.
I love to bake and as old as I'm getting, and as much as I prefer eating them, pies do give me pause.  It isn't the crust as so many fear, it's that the pie will, well, just turn out.  Especially if it's something I don't make hardly ever.
Tonight we are going to friends' for dinner.  I said I'd bring dessert.  Just the other day I took a book out of the library called Everything Chocolate and the chocolate pecan pie kind of jumped out at me.
The thing that gives me more pause than any part of pies baking is the pre-cooked crust.  The kind you line with foil, weight with pie weights and bake for awhile before the filling is added and then baked some more.   But I read the directions carefully (something I don't need to do anymore with a fruit pie) and proceeded. 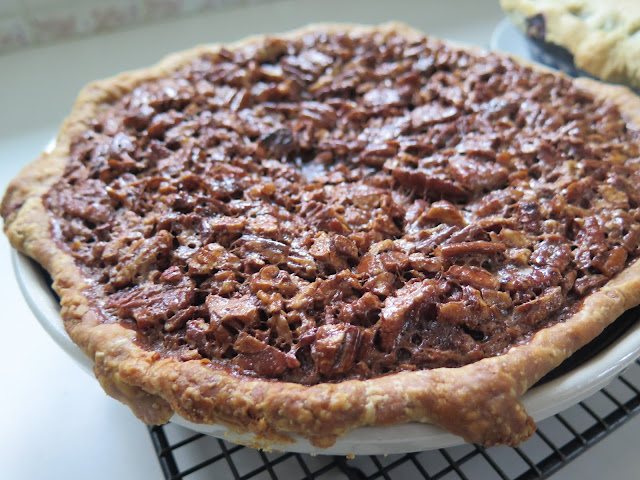 This crust is make with butter.  All butter.  Nothing else to sully the taste.  I made the dough the day before so it had optimal time to chill.  I rolled it out this morning, lined it with foil, added beans for weight and baked it.   You are supposed to bake with your nose.  If it smells then check it.
You KNOW butter makes a beautiful smell don't you?  I checked it.  Directions said at this point take the foil out and bake for longer.  Now, this is the nervous part, but I did it.  After half the time directed, I checked it again and it looked too done.  Take it out, add the filling, pray, and put it in the oven to cook.
This is the part where I started to channel mother-in-law. 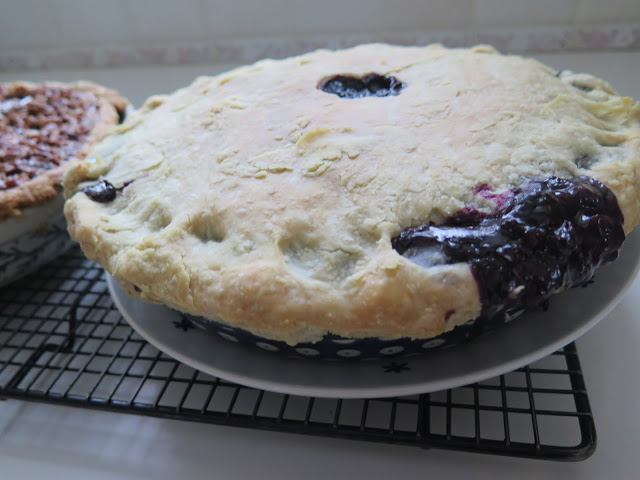 Just in case, just in case the chocolate pecan pie crust is burnt, too done, or whatever,  I made another pie.  I wasn't afraid of this crust and I took from the freezer the black raspberries I picked last summer and at that moment remembered I told these friends I'd use them in a pie for THEM so I knew the channeling was working.  I put together this pie to be ready to slip into the oven the minute the chocolate pecan pie was finished.  I know the filling is leaking.  That's how I know a pie is done.  It bubbles and leaks and I love that look on a pie. It means there's LOTS of filling. 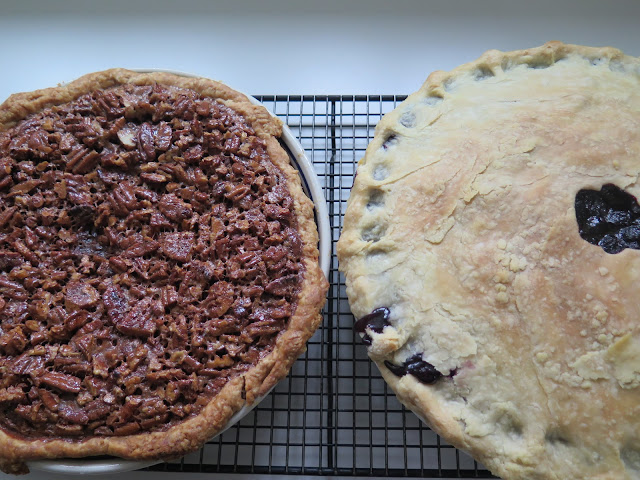 When PH saw there were two pies he looked at me like I was crazy until I told him, "I'm just channeling your mother."   "Ah," he said, and walked away.
Posted by Denice Barker at 2/15/2020 3 comments:

I've been on a clean-up-the-stuff kick lately.  That includes finding the very lost and finishing them somehow. 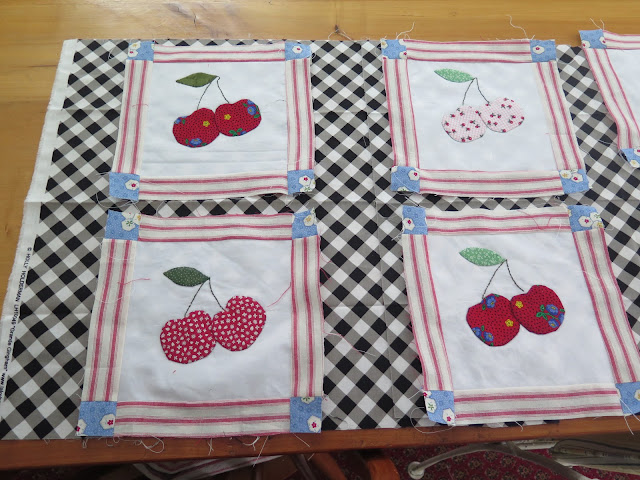 Back in 2004 when I went to guild meetings there was something called a block exchange.  I took the instructions for these cherries, cut most of them out, planned it, and then put it down. Everything was there, cut and ready but I just tucked them away.  I found them this week.  One had been pinned, none of them appliqued.  So, simple as they are, I worked them up in one evening and today, an unexpectedly snowy day, I'll add the checkered border and they will make a nice little summer table top. 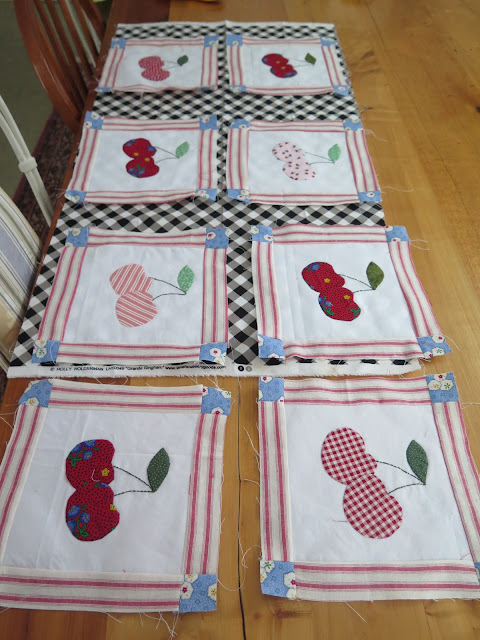 And 16 years after the fact, they'll be something other than scraps in a box. 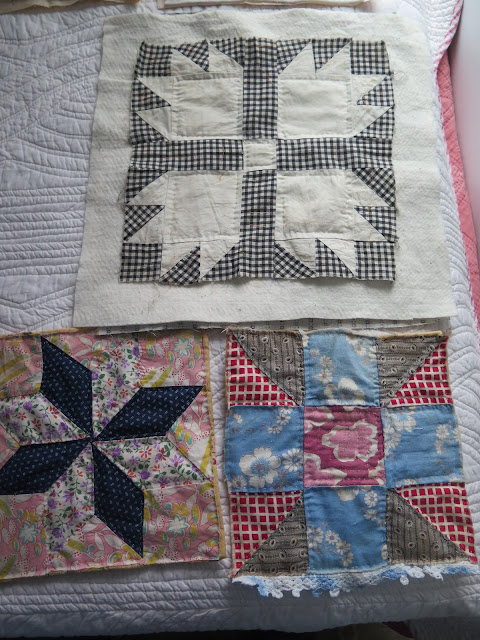 There were also these antique squares floating around in a box.  What do you do with independent antique blocks?  How long will I continue to move them from place to place?   One afternoon last week I layered them and while watching tv in the evenings I've begun to just quilt them independent of each other.   When old pillowcases wear out, the ones others have thrown out or I find in estate sales all raggedy and forgotten, I cut the crocheted edges off and save those hand worked edges.  I added a little piece to the bottom of the square on the lower right.  Two pieces seeing the light of day once more. 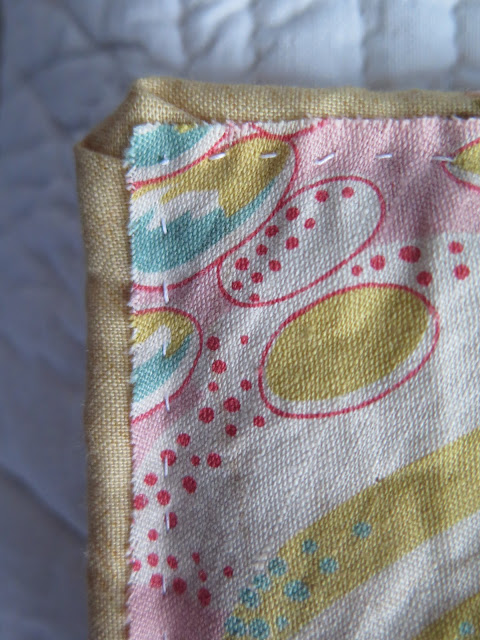 I've left the edges raw,  just tucked the backing over the batting and stitched it down.  I'm not overthinking this, I'm just bringing little things out into the open once again. 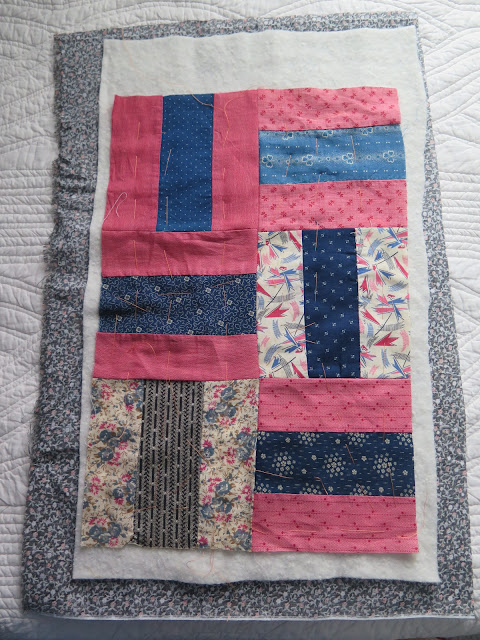 I don't know what I'll do with them. 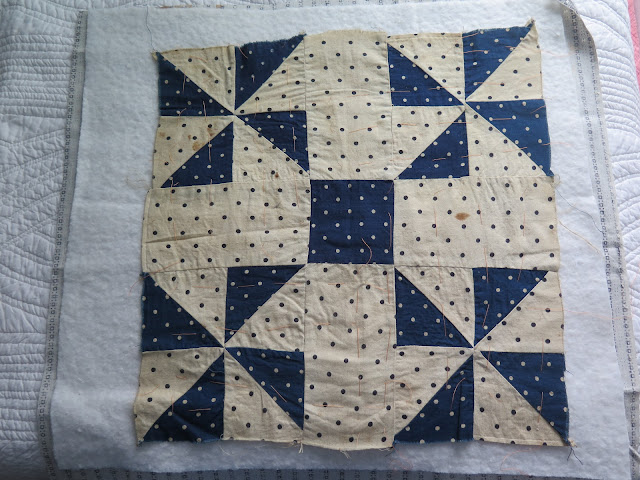 Maybe a little gallery on the wall?  Maybe, but they won't be in a box anymore, either.  They'll be remembered as someone's work.

Lately when I get together with quilt friends the conversation wanders to wondering what will happen to our quilts when we die. None of us is getting any younger and we are entering the decade where today is as good as it gets. Arthritis and eyesight and mobility are making things seem real and urgent.  We are talking about who to will our stashes to.  Whoever is left is usually the answer. 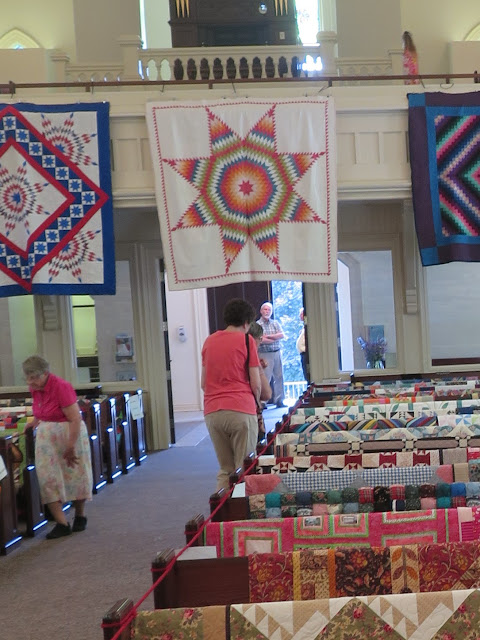 Some of us have found treasures in estate sales, some beauties.  If a quilt makes it to a shelf in a garage at an estate sale it means the family has picked over the deceased relative's belongings and rejected the quilt.  Notice that gorgeous star quilt hanging from the balcony.  That was found by a friend at a garage sale with a  $20 price tag.  No one in the family wanted it.  Linda grabbed it.  When she gave it to me for the quilt exhibit at church last summer I gave it pride of place and made sure it was noticed when I showed people around the exhibit.  Someone put a tremendous amount of work in this quilt.  It is completely hand pieced and quilted, and the family rejected it in the end.


I feel confident that when it's my turn my daughter and daughter-in-law will not let my quilts end up in the sale of my life.  There are enough grandchildren who will want them, and maybe, hopefully, great-grandchildren.  I hope.

Things in Jars by Jess Kidd

Sometimes you just know you’re going to like a book. I’ve read Jess Kidd’s books and fell for her writing voice. She is the kind of author that makes you stop and re-read a paragraph, a sentence, a whole page, just to hear it again in your head. And then maybe you smile and dog ear the page so you can go back to it and read it again later. Well, I did something with Things in Jars that I just don’t ever do. I finished the book and then read it all over again. I just wanted to hear it in my head again. So, is it the author’s style, is it her language, is it the story itself? All of it.
The story takes place on the dark side of Victorian London, the body snatching for medical knowledge side of London. The fascination with oddities in nature including oddities in children side of London. Bridie Devine was a street child brought to London from ireland and then sold by her caretaker to a doctor who was impressed with Bridie’s lack of “eewww” factor around a bloody dead body especially in a child who guessed her age at about seven.
When we meet Bridie she is charged by Sir Edmund Athelstan Berwick to find his kidnapped daughter, Christabel. Sir Edmund tells Bridie that only three people know of Christabel’s existence. One would think this narrows the focus of her search for kidnapper but it turns out Sir Edmund’s background isn’t sterling and his Christabel is an oddity and she isn’t his, as it turns out, he acquired her.
The story is cast with the misfits, the overlooked, those whose body would be stepped over in a gutter. But to Bridie they were hers. We are led through dark, dirty, smelly alleys and the author tells us exactly what those smells are. She invites us to close our eyes while making our way through the streets so we can identify the stench. This is one of the pages I turned down to read again. Who does this the way she does???
This story is set in a time when curiosities are collected and stored in bottles on shelves. The race is on to put Christabel in one of those jars, to make a few coins off her or for Bridie to liberate her and maybe vindicate herself from the failed attempt to save a young boy recently. Oh, and did I mention her ghost accomplice?
I’ve read this book twice in a month. You’d be doing well for yourself to read it once and savor every single word.