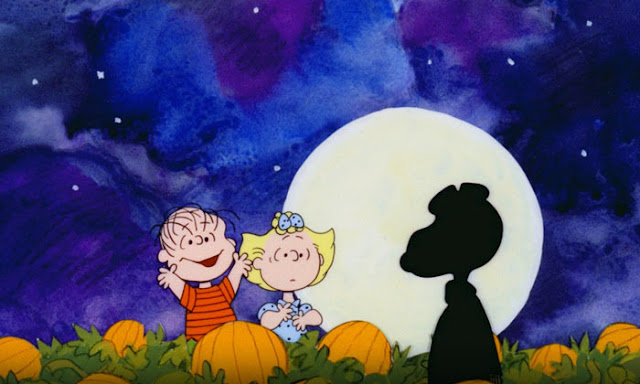 Happy Halloween Everyone!  This is going to be a big night!  The first time in six years it won't be raining.  Hooray!  Pics tomorrow. 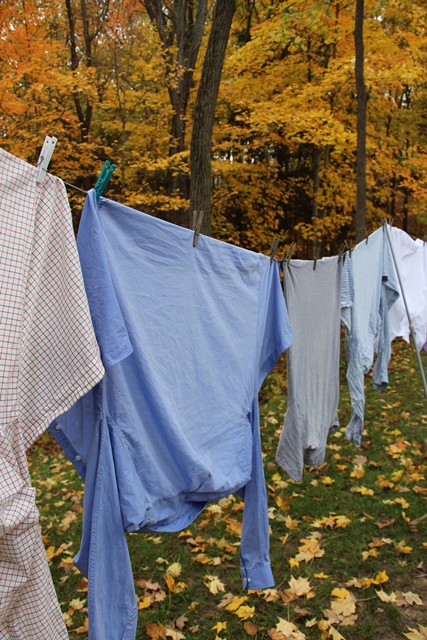 The leaves are changing and it's chilly and cloudy but still, we hang.  As long as we can, we hang. 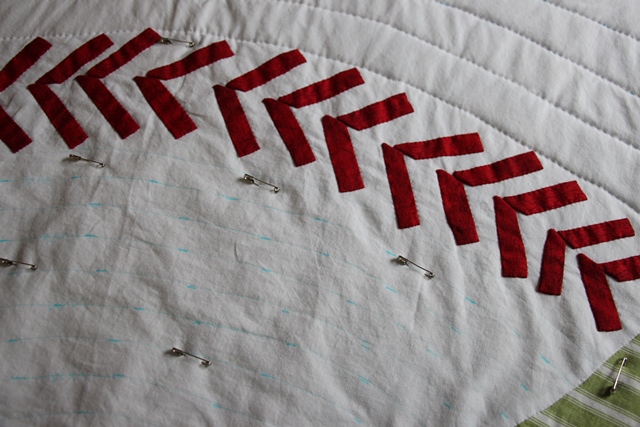 I started quilting the one baseball quilt and was surprised it went well.  I'm quilting 1.5 inches apart in a curve on the ball.  These marked blue lines are at 3/4 inch but PH said to make them wider.  I'll follow the baseball lover's advice.  I did the middle at 1.5 and he's right, it works.  I could have the ball finished in two sittings.  Then onto the background and I am entertaining thoughts of having both done by Christmas.  That's just a thought, not a promise.
Posted by Denice Barker at 10/31/2016 1 comment:

Morphing is something that happens a lot when I make a quilt.  I sometimes use a pattern but sometimes I get hair brained ideas and decide to go it alone and this sometimes gets me into trouble.  Not always, but sometimes.  Like this time.

Mikey needs a big boy quilt.  He's the only grand who doesn't have more than the quilt I made when he was born.  I saw an idea and decided to make one for him and Charlie.  This is when the morphing comes in.  The quilt I saw was on Pinterest and it had five very large baseballs on it.  Large like in 44 inches in diameter.  I knew that would be a big undertaking, making two quilts like that so I brought it down to three.  And then after making the one ball decided the quilt would have one ball.  Sewing all of those red stitchings on by hand twice was hugely time consuming.  But I did it.  Appliquing the ball onto the background was one evening's work (the green stripe will be cut away from the back of the ball soon.)  Easy peasy. 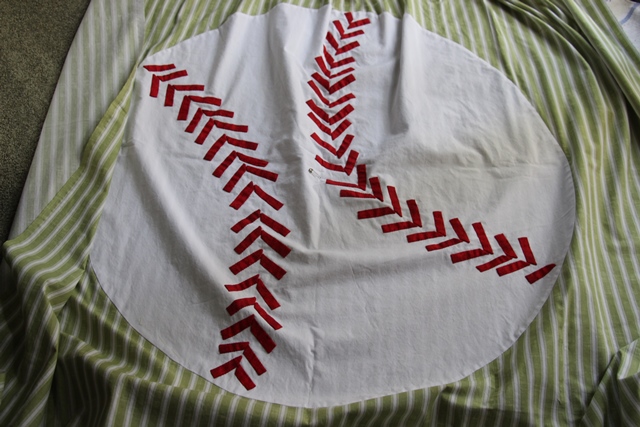 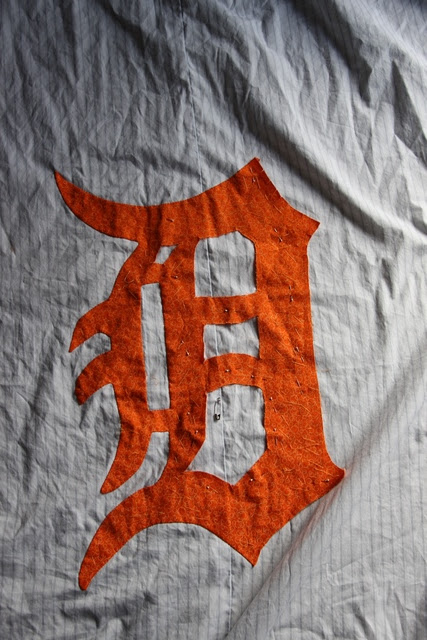 Then, DIL said to make sure the quilt has something Detroit Tigers on it.  While I had use of the enlarger for my wall, I enlarged the monogram "D" and pinned and basted it in the middle of the back.  Problem is, it's a long stretch with lots of bunched up fabric in my hand trying to reach the "D."   More slow work. 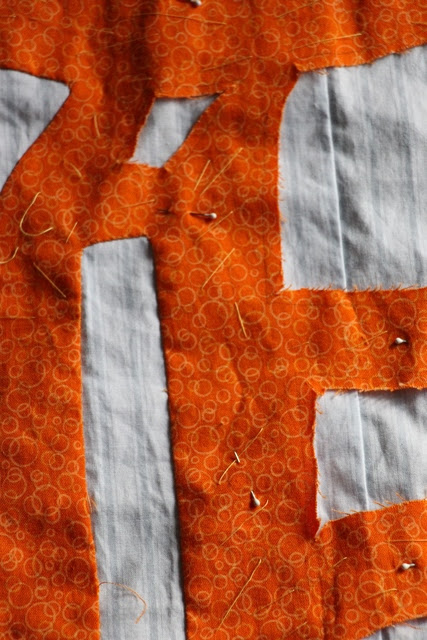 I planned to spend this day that new windows are being installed in the house appliqueing the "D's" it was just too pretty outside to be sitting inside.  When we get to this part of the year we never know when the last nice day is here till it's gone and there are no more.  I took my current book out to the back to enjoy the sunshine, the view and the birds. 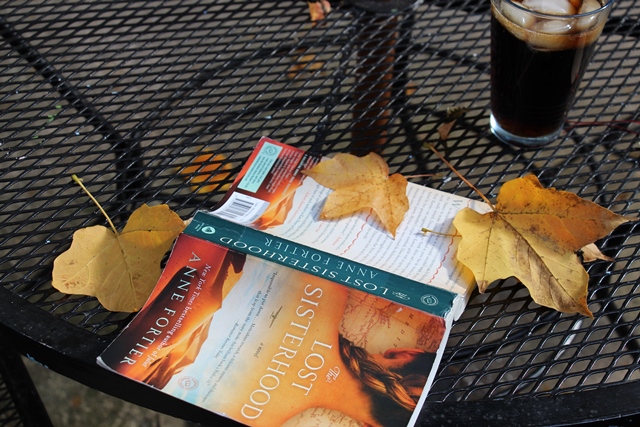 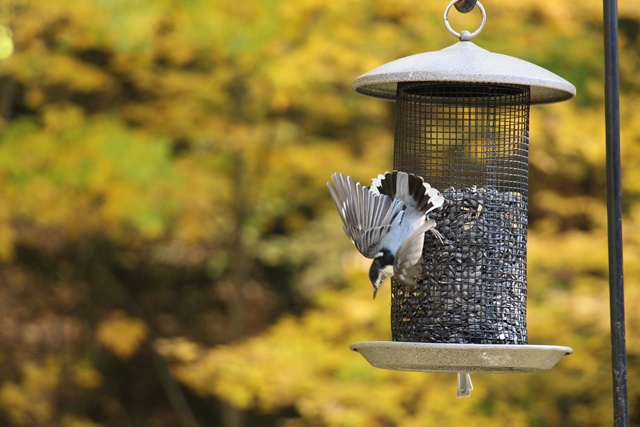 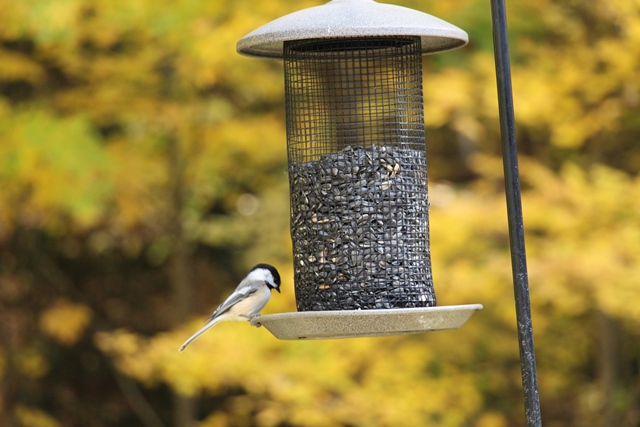 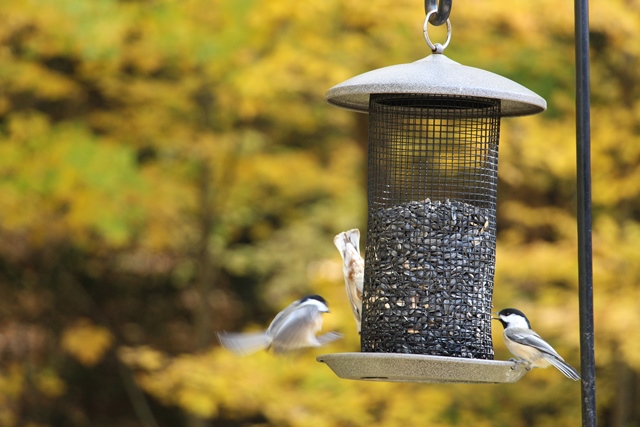 But they are so distracting!  I often tell people that I sit in front of the house more than in the back because the back is so beautiful it's distracting!  The birds are so darned much fun to watch and when a breeze comes up the leaves fall like rain.  There's a determined and very smart squirrel out there that I spend much too much time trying to outsmart.  How sad is it that I'm not smarter than a squirrel? There is another project that I've been working on and is finished but I can't talk about it right now.  It's a secret.

Tomorrow is supposed to be rainy and cold all day.  I should go back out and join the birds and that squirrel while I can.
Posted by Denice Barker at 10/25/2016 1 comment:

And Every Morning The Way Home Gets Longer and Longer

And Every Morning the Way Home Gets Longer and Longer

How does one approach a book when the author tells you he never intended for you to be reading it? The author tells it all in his letter to the reader.  This is a story about remembering and letting go. It’s a story about a grandfather and a grandson, a father and a son. It’s about living and not living.
Grandpa and Noahnoah (Grandpa says his name twice because, he says, he likes his name twice as much as everyone else’s) are closer than Grandpa was to his own son, Ted. But isn’t that the way of it?  We’re so busy working and building a life and caring for our children we forget how to enjoy them.  When we get to be grandparents we are given our second chance, our chance to get it right.   This is not lost on Grandpa.  He knows he became someone different when Noah was born.
They spend their days loving mathematics, talking, exploring the mysteries of life and talking about life and death.  They slowly come to understand, never fearing to ask the questions a young boy has about life and what comes after.  They are trying to learn how to say good-bye perfectly.
Grandpa knows what’s happening to him.  He knows his square is getting smaller and smaller and his biggest concern is how to explain to Noah that someday he won’t be here anymore. His body will be but his mind won’t. He asks Noah when he gets his good-bye down perfect to not look back, to live his life forward.  Grandpa needn’t have worried so.  Noah is so dedicated to his Grandpa that even though Grandpa doesn’t realize it, Noah is still his best friend. His truest friend in life.
This is a novella.  It’s only 76 pages long.  You can finish it in an evening but I promise you, it will stay with you long after.
Posted by Denice Barker at 10/23/2016 No comments:

Labels: And Every Morning the Way Home Gets Longer and Longer, Fredrik Backman

The Fir Tree was first published in 1845 and like I always tell the kids at school, “the good ones last.”
The story of the Fir Tree is, of course, universal.  We don’t know what we had till we lost it.  What you are buying with this new version is the illustrations. They are magnificent!